Just one final step...
You must confirm your email address by clicking on the link we’ve sent to your email address.
You are only one short step away from reading 5 free Field+ articles.
VIDEO: High Definition is new Derby favourite

High Definition is the new favourite for next year’s Derby after he provided Aidan O’Brien with a 10th successive win in the Alan Smurfit Memorial Beresford Stakes at the Curragh on Saturday.

Having flown home late to get up on his debut, High Definition was sent off the 9/5 favourite, but he had only one behind him with three furlongs to run and Seamie Heffernan was already rowing away as Monaasib kicked clear.

Heading into the final furlong, Kevin Prendergast’s Monaasib appeared a likely winner, but High Definition really began to grab the ground close home and he ended up winning by a cosy three-quarters of a length.

High Definition, who is a full brother to last year’s race winner Innisfree, is now the 12/1 market leader with one firm for the 2021 Epsom classic.

O’Brien, who was winning his 20th Beresford Stakes overall, said: “He’s lovely and puts away a lot of ground. He’s a big, rangy horse with a massive, big stride and is one to really look forward to.

“It was the same in his maiden – you would say he’s not going to get there and in the end he’s won easily. I’d say we’ll put him away now. He could start in a Guineas and he looks like he’ll be a middle-distance horse. I was a bit worried about the bend as he’s never been around one before.”

O’Brien had earlier been on the mark with Santa Barbara (9/2) in the Irish EBF Median Sires Series Maiden.

A half-sister to Group 1 winner Iridessa, Santa Barbara travelled well throughout in the mile heat and eventually came home an easy two-and-a-half-length winner.

O’Brien said: “She’s a big, powerful filly with loads of class. She was just ready to go racing. She travelled very well through the race.

“There is a good chance she won’t run again this year. We just needed to get a run into her and she’s going to be lovely for next year.”

Sent off a 10/1 chance having largely failed to reproduce his smart juvenile form – barring his Commonwealth Cup third – he came with a late rattle under Declan McDonogh to beat Forever In Dreams by half a length.

“Richard said he had been a bit disappointing, but he was coming to the boil and I was getting on him at the right time,” said McDonogh.

“He raced lazy, but the pace was good and when I switched him out, he really ran towards Seamie (Heffernan, on Forever In Dreams) and found plenty for pressure.

“Richard said the headgear was helping him and maybe he’d just got a little bit clever. He toughed it out well in the end and could win another one of those.” 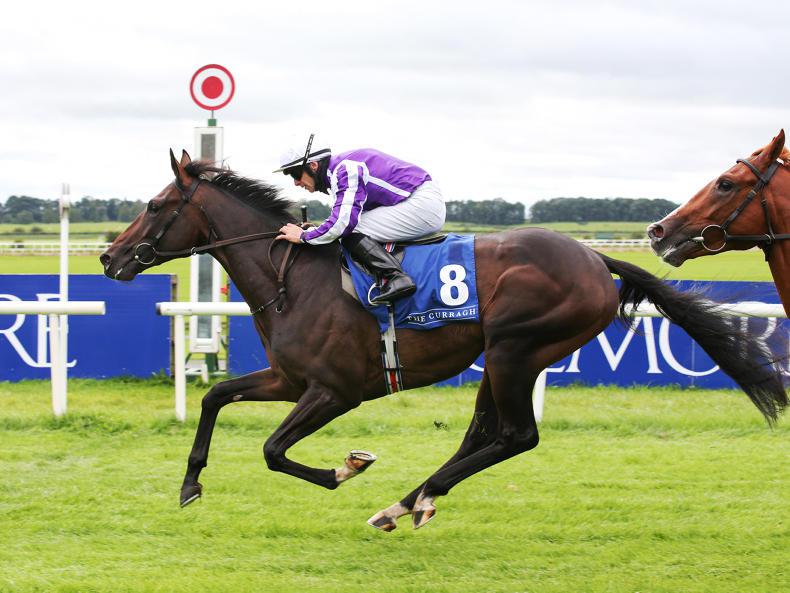