The three-year-old son of Kodiac landed the prize by a half-length from The Tin Man. Earlier, the Requinto gelding Great Scot easily won the mile Group 3 contest on the card 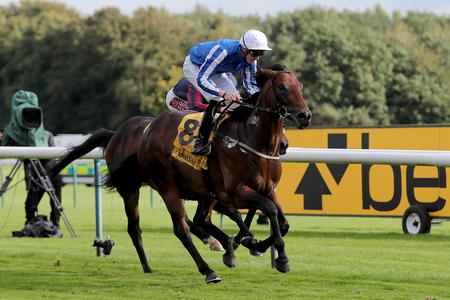 HELLO Youmzain continued the trend of the classic generation winning Group 1 sprints this season with a clear-cut success in the Betfair Sprint Cup at Haydock.

Ten Sovereigns and Advertise – who both missed out on this event – have triumphed for the three-year-old division in top-level contests this term, and the lightly-raced Hello Youmzain added another victory.

One of three in the race for Kevin Ryan, James Doyle was content to help cut out the running with Invincible Army.

Two furlongs out the pair got a break on the field and once Hello Youmzain saw off his big rival, he just needed to hold any challengers emerging from the pack.

Former winner The Tin Man and stablemate Brando made late bids, but the 9/2 co-favourite stuck it out well. The Tin Man ran his best race of the season back in second, while the German raider Waldpfad flew home for third.

Hello Youmzain had been off the track since finishing third in the Commonwealth Cup at Royal Ascot in June.

Class act - Hello Youmzain makes most and powers to Group 1 glory in the @Betfair Sprint Cup for @the_doyler and @kevinryanracing ?? pic.twitter.com/OKw1HmopQ5

Ryan said: “We decided after Ascot that we’d be patient with him as it’s not all about this year. These horses don’t come around very often and although we gave him a tentative entry in the Nunthorpe, this race was always the plan.

“He’s such a young horse and a big horse as well. You shouldn’t wish your life away, but he’s going to mature and he’ll be a stronger horse next year. He’s very exciting.

“He’ll have one more run this year on Champions Day at Ascot and then we’ll put him away for next season.

“I wouldn’t rule out bringing him back to five furlongs at some stage. He showed today he has loads of pace – Major Jumbo is not a slow horse and he had him off the steel within a furlong.”

The trainer went on to reveal the fourth-placed Brando had burst a blood vessel, adding: “He has done it before and he did it here. He travelled into the race great, so it’s unfortunate.”

James Fanshawe was understandably proud of the performance of defending champion The Tin Man, and a rematch with Hello Youmzain in the Qipco British Champions Sprint on October 19 looks to be on the cards.

Fanshawe said: “First of all, the team has done a fantastic job to get him back. After his last run at Newbury, I thought that might be the end of him as he was a bit stiff behind and he is seven.

“Everyone has been working hard to get him back to top form. With the performances this year, you can never be that confident, but I knew he was in good shape going into the race.

“I’m really pleased with him, he’s run very well and I hope we can have him in the same form for Ascot (Champions Day).”

Great Scot remains unbeaten at @haydockraces with a lovely performance and career-best in the Group 3 Superior Mile for @RKingscote and @TomDascombe pic.twitter.com/mCx0Q3QUws

Earlier, Great Scot led his rivals a merry dance in the Group 3 Bet In Play On The Betfair Exchange Superior Mile.

Victorious in the Listed Ascendant Stakes on the corresponding card 12 months ago, Tom Dascombe’s inmate has been highly tried since, running with credit in the Vertem Futurity Trophy at Doncaster, the Greenham Stakes at Newbury and the 2000 Guineas at Newmarket.

However, having failed to run up to expectations on his next couple of appearances, connections decided on a gelding operation and an improved performance to finish a close-up fourth in last month’s Sovereign Stakes at Salisbury was a step in the right direction.

The three-year-old was a 7/2 chance for his latest assignment and was soon bowling along at the head of affairs.

With 11/4 favourite Sharja Bridge failing to pick up from towards the rear of the field, Matterhorn got closest to Great Scot, but Dascombe’s charge could be called the winner a long way out and passed the post with almost four lengths in hand.

Dascombe and Kingscote were claiming their fourth winner at the three-day meeting.

“We’ve had an up and down season with the horse. He started off really good, but then almost hit a flat spot and he was just running too keen,” said the trainer.

“We decided to do two things – geld him and make the running. He ran really well at Salisbury and today he’s bolted in. When everything goes right and then the wheels fall off, it’s difficult, but at least now we’re back in the right direction.”

Great Scot could be on his travels next year.

Dascombe added: “The owners are away on holiday at the moment and I haven’t spoken to them, but we’re thinking about Dubai. Now he’s a gelding, he’s a prize-money horse, and the prize money is in Dubai and places like that.

“As long as we mind the horse, we should have him for a few years and you never know where he could end up. He’s never lost his ability. What is it they say – form is temporary, class is permanent.”