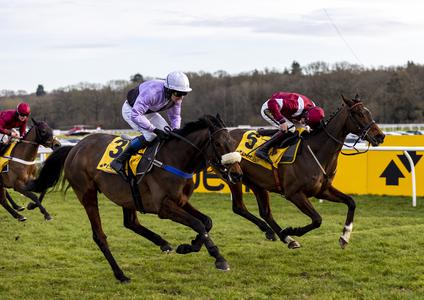 Glory And Fortune held off I Like To Move It to provide jockey Stan Sheppard and trainer Tom Lacey with victory in the most valuable handicap of the season, the Betfair Hurdle at Newbury on Saturday.

Glory And Fortune is a thrilling winner of the Grade 3 @Betfair Hurdle, tanking through to take the lead and finding plenty to hold on for a brilliant success for @StanSheppard9 and @tflacey ?? pic.twitter.com/O4VaJCOpDq

Second last time out in the Christmas Hurdle to Epatante, Glory And Fortune was nevertheless a relatively unconsidered 20/1 shot in a highly-competitive field of 14.

The novice Jetoile made sure the race was run at its usual helter-skelter pace, but running to three out he had faded and Glory And Fortune was left in front.

That was probably sooner than Sheppard wanted, but there were still a handful of the favourites travelling apparently well.

Among them were the Nicky Henderson-trained duo Broomfield Burg and First Street, I Like To Move It and last year’s winner Soaring Glory.

Glory And Fortune nicked a couple of lengths on the run to the second-last, however, and it proved crucial.

Everything else was soon off the bridle and while Nigel Twiston-Davies’ novice I Like To Move It emerged from the pack to throw down a late challenge and was closing with every stride, the line came in time for the winner who held on by a short head.

Victory for Sheppard came relatively hot on the heels of his Welsh National success with Iwilldoit.

Lacey said: “I was talking to myself and saying ‘don’t go too soon, don’t go too soon’, but Stan has had a fantastic year and it is fab for Stan. He works incredibly hard and when I leg him up on the horse he puts belief in him, so it is just great.

“Jerry (Hinds, owner) won the race previously and he always likes to have a runner in the race. Glory And Fortune ran in it last year actually and it was an obvious race to put the horse in.

“It is a huge handicap and I knew he deserved to have a run in it and as hopeful as we were, you never actually believe you are going to win it.

“He ran a cracker in the Christmas Hurdle, but they crabbed it and said others didn’t show up, which is probably half-true. I thought he ran Epatante to the line and it was a taking performance.

“We have learned more about the horse this year than ever before. We used to ride him handy and he has improved from being dropped in and we are not as hard on him as we once were. And he is just thriving.

“Of course, having the entrapment (a growth of scar tissue) removed in his larynx, everything has come together.

“He was not blowing at all. Jerry will definitely want to run in the Champion Hurdle – without a doubt. It can happen. God willing and he is sound tomorrow, and eats up and all is well in the lead up to the race, Jerry will want to run him in it without doubt.”

He added: “Financially it will be our biggest win. I bought him as a three-year-old store. Every winner is important.

“He is a beautiful horse. He has jumped fences and he has had runs over them and I think he will again. When we ran him over fences, he had the entrapment, and the poor horse was stopping so quickly and I said to Jerry we have to go and do something pro-active.

“He won’t be jumping a fence this year and next year we will possibly go novice chasing. Why not?”