Just one final step...
You must confirm your email address by clicking on the link we’ve sent to your email address.
You are only one short step away from reading 5 free Field+ articles.
VIDEO: Give Me A Copper lands Wincanton feature

VIDEO: Give Me A Copper lands Wincanton feature
By Irish Field Contributor on 09 November 2019
There were also big-race wins for Fusil Raffles and Reserve Tank on the card

Paul Nicholls landed his 10th Badger Beer Silver Trophy Handicap Chase at Wincanton on Saturday as Give Me A Copper provided part-owner Sir Alex Ferguson with a famous win.

Give Me A Copper finds the line just in time from the fast finishing Soupy Soups to win the Badger Beers Silver Trophy Handicap Chase for Harry Cobden and Paul Nicholls ?? pic.twitter.com/ZVcBT6AxGA

Nicholls also ran Present Man in the race, who had won the last two renewals under Bryony Frost, but once he relinquished the lead to Rock The Kasbah on the second circuit, his supporters knew their fate.

Rock The Kasbah looked right back to his best and tried stretching the field down the back straight, but Harry Cobden and Give Me A Copper, who has been plagued by injury in recent years, always looked to be travelling comfortably.

There were still a handful in with a chance turning into the straight, with Royal Vacation and Just A Sting holding claims, but in the end is was Soupy Soups who threw down the final challenge.

Soupy Soups was flying after the last, but to his credit, Give Me A Copper had enough left to fend off the lightweight by a neck with Royal Vacation back in third.

As the winner crossed the line Nicholls, who is also one of the part-owners, embraced former Manchester United manager Ferguson.

“I’m thrilled that we’ve eventually got him right to win a big race,” Nicholls told ITV Racing. “Everything went right today, Harry gave him a great ride and even managed to save a bit for the finish. It’s great to have a winner in the boss’ colours.”

Ferguson said: “I’m really pleased. We didn’t expect it to be honest, as it was his first run and Paul said he might be a bit fresh, so it’s really nice. Paul was strangling me! I’m covered in coffee, it was nice to watch – he was produced at the right time between the last two.

“I don’t know what we’ll do with him now. I love winning and that is why we are all in it, the excitement at the end – you can’t beat it.”

Cobden said: “He jumped like a stag the whole way, I really fancied him all week, so I’m delighted. He’s got loads of class. He finds it easy in these big handicaps as he travels well. I managed to get a blow into him going down the back. I’m absolutely delighted.”

Nicholls and Cobden also teamed up to take the closing bumper with Confirmation Bias (3/1 joint-favourite).

Reserve Tank opened his account over fences in the Grade 2 “Rising Stars” Novices’ Chase on the card.

Colin Tizzard has high hopes of the five-year-old reaching the very top given he won twice at the highest level over hurdles last season.

However, he was surprisingly beaten on his chasing debut at Chepstow recently when he met the last fence wrong and Jarveys Plate flew past him.

There was no hiding place in this contest as Solomon Grey set a serious pace in front, jumping with accuracy and increasing his lead at most fences.

Reserve Tank travelled through the race alongside If You Say Run and by the third-last obstacle, the two market leaders cruised past Solomon Grey.

It was clear running down to the last Robbie Power just had to jump it safely on the 4/5 favourite and while he did not sprint clear on the run to the line, Reserve Tank was three and three-quarter lengths too good for If You Say Run.

Power said: “He hated the ground and he’s a horse we might not see a lot of through the winter when the ground is very heavy – all his best form was in the spring last year on good ground.

“He jumped adequately, he’d improved from Chepstow, he was much more relaxed today which was great and he didn’t do a stroke when he got to the front, he was very idle.

“He’s a very good horse. I just think he’s ground dependent at the moment. Maybe as he gets older he’ll handle it, but all his best form is on good ground.”

Tizzard told ITV Racing: “During the race I was wondering how well he was travelling as he’s always been a bit keen, but that’s better to see him like that and he’s won really well in the end. Robbie makes it look easy. We’re glad to have him any time he wants to get on the plane, he’s really good for us.

“He’s been talked up all summer having won two Grade 1s, but sometimes you don’t know if those that won early in the year are over the top. This year he was beaten by a better horse at Chepstow, but today was a lovely performance.”

Fusil Rafflles gets the better of Grand Sauncy to land the Grade 2 Unibet Elite Hurdle for Daryl Jacob and Nicky Henderson ?? pic.twitter.com/CpxwgYVgus

Nicky Henderson’s four-year-old was forced to miss Cheltenham and Aintree last season, but returned from injury to land a Grade 1 at Punchestown.

Fusil Raffles was getting 3lb from Paul Nicholls’ Grade 2 winner Grand Sancy here, but he made a crucial mistake at the second last as the market leaders settled down to battle it out.

Grand Sancy had Fusil Raffles and Daryl Jacob under pressure at that stage, but he guessed at the flight and in an instant Fusil Raffles had the advantage.

To his credit Grand Sancy did not go down without a fight, but the 4/7 favourite held on by three-quarters of a length.

Henderson told ITV Racing: “I was very nervous, he wasn’t ready for a racecourse to be honest, so I wasn’t expecting it to be easy. He’s grown so much in the summer and he hadn’t filled out. I didn’t start with him until about three weeks ago, so I was nervous.

“I wished I’d had three more weeks! There’s a lot more to come, he’s grown a lot and he literally did his first bit of work three weeks ago, so he’s done well.”

Fusil Raffles is one of three Champion Hurdle hopefuls this season for Henderson, with Triumph Hurdle winner Pentland Hills and dual champion Buveur D’Air also in that division.

Henderson added: “Buveur D’Air is in great form and, as usual, will go to the Fighting Fifth. Pentland worked this morning and went well, but he grew outwards while Fusil grew upwards!

“Pentland has grown into a bull of a horse. I just need to get him ready for wherever he goes, I’m struggling to find a race for him because after the Fighting Fifth, there’s a dearth of two-mile races. I don’t want them taking each other on yet.”

Misty Bloom (9/2) appeared to relish the rain that fell earlier in the afternoon when winning the Richard Barber Memorial Mares’ Handicap Hurdle.

Having moved through smoothly to challenge Aimee De Sivola, the only moment of worry for 5lb conditional jockey Ben Jones was when the mare met the last flight on a very long stride.

After surviving that, Emma Lavelle’s six-year-old kept up the gallop to score comfortably by six lengths.

Lavelle said: “She’s not over-big, so being at the bottom end of the handicap in a race like this was ideal. Ben gave her a super ride, he’s a proper jockey to look out for.”

There looked to be some nice youngsters in the Frome Scaffolding Group EBF Stallions “National Hunt” Novices’ Hurdle in which Alan King’s Edwardstone came out on top.

Sent off the 6/1 third choice in the betting, Tom Cannon moved him up onto the heels of the leaders coming out of the back straight.

At the time Nicholls’ Flic Ou Voyou appeared to be travelling slightly better than odds-on favourite Fiddlerontheroof, only to quickly fold under pressure.

Despite Robbie Power’s best urgings, Fiddlerontheroof, who was second in the Persian War last time out, could not match the pace of Edwardstone who won by three-quarters of a length.

The Philip Hobbs-trained Keep Moving (5/1) was a clear-cut winner of the Z Hotels Conditional Jockeys’ Handicap Chase under Sean Houlihan. 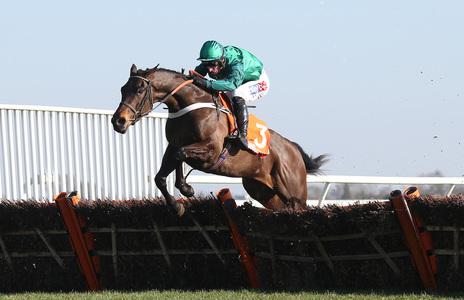 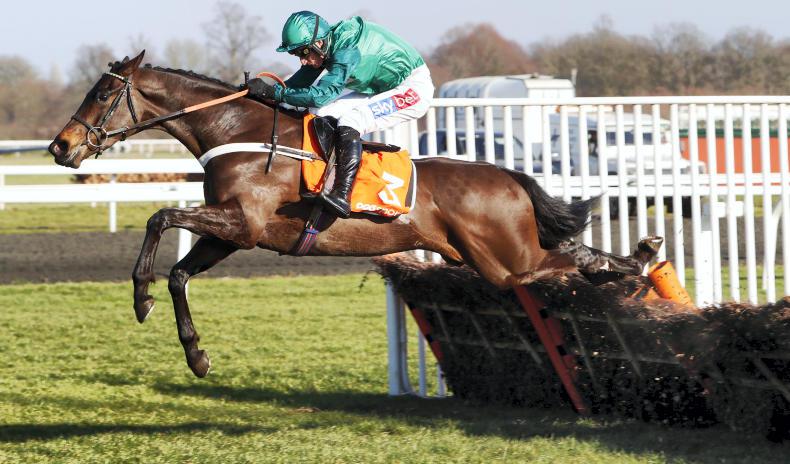 Inside Racing
BRITAIN: Raffles ruled out of Triumph
By Ian Carnaby on 26 February 2019
Field + 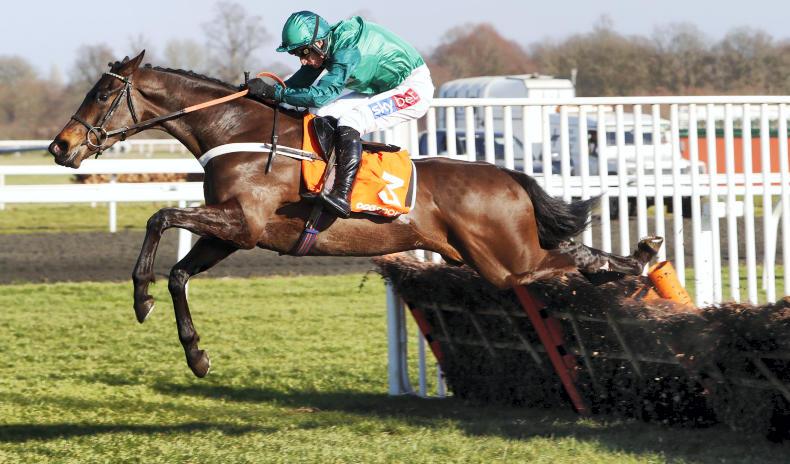