Just one final step...
You must confirm your email address by clicking on the link we’ve sent to your email address.
You are only one short step away from reading 5 free Field+ articles.
VIDEO: Emmet Mullins fined €6,000 by Tipperary stewards

VIDEO: Emmet Mullins fined €6,000 by Tipperary stewards
By Mark Costello on 01 July 2020
Just nine days after being banned from the racecourse for three months, the talented young trainer again fell foul of the authorities on Wednesday

TRAINER Emmet Mullins was fined €6,000 by the stewards at Tipperary today [Wednesday] over the performance of his horse The Shunter, who finished fourth in the opening maiden hurdle.

Backed from 10/1 to 6/4 before racing, The Shunter (light blue silks) went off the 2/1 second favourite, and finished strongly from off the pace under jockey Brian Hayes, who himself picked up a 21-day ban for not making sufficient effort to obtain the best possible placing. The horse, who has yet to win in 19 lifetime outings, was barred from racing for 60 days.

Bold Enough finished behind Ballyadam & Asterion Forlonge last term & this £65,000 purchase gets off the mark over timber with success for @HenrydeBromhead at @tipperaryraces with @rachaelblackmor aboard fresh from her ride in the Irish Derby

The incident comes just nine days after Mullins was fined €5,000 by the Referrals Committee for entering Leopardstown Racecourse without the correct paperwork. The trainer was also banned from coming racing for three months over that episode.

That suspension starts next Monday, so the trainer was able to give evidence to the Tipperary stewards today and told them that this horse was having his first run today under his care. He described today's run as "an expedition" to get his charge to learn, to get him to settle and get him to race.

In his opinion his charge was fit enough to compete and felt that he was sure to improve from today. He described the horse's past poor form and, having had the horse's wind checked at a veterinary hospital, he now believes that a wind operation is required but thought that his charge would benefit for faster ground conditions which would make the horse more manageable. He confirmed that he was satisfied with the ride.

Hayes said he was instructed to drop his mount out last and to get his mount to relax and breathe. He explained in detail to the acting stewards, while the video of the race was being viewed, that his mount relaxed but began to make a respiratory noise in the back straight and he gave him a chance at this point, even though he wanted to be closer to the pace.

always been an issue which has progressively got worse. He had suggested to the trainer that a tongue strap should be applied to assist the horse.

The stewards also received a report from the veterinary officer who stated that The Shunter was post race normal and that samples had been taken for analysis. Having viewed the recording of the race and considered the evidence, the stewards were satisfied that Mullins and Hayes were in breach of Rules 212 and 212(A)(ii), which are colloquially known as the 'non-trier' rules.

Having taken the previous good records of the jockey and trainer into consideration, the stewards fined Mullins €6,000, suspended The Shunter from running for 60 days and suspended Hayes for 21 racedays with his riding fee to be forfeited.

Both Mullins and Hayes, along with owner Paul Byrne, have the option to lodge appeals.

The owner, trainer and jockey had better luck later on the Tipperary card when Pilbara (backed from 7/1 to 8/11 favourite) won a handicap hurdle with ease. 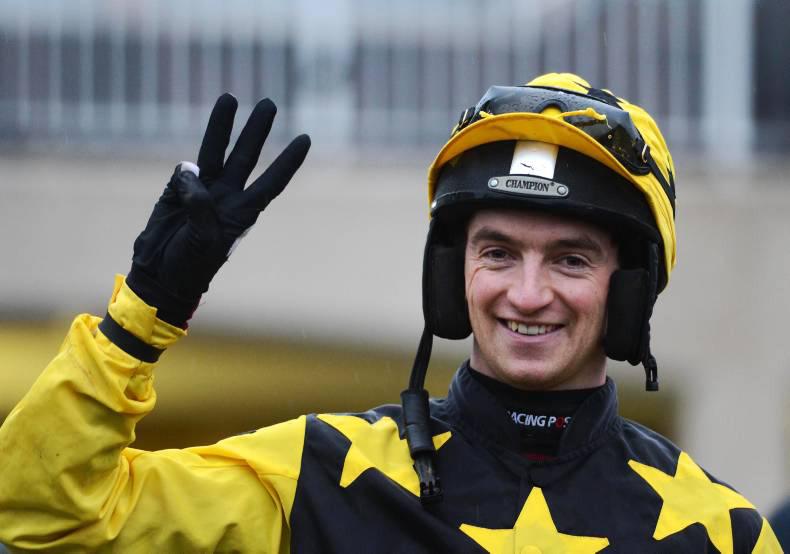