Just one final step...
You must confirm your email address by clicking on the link we’ve sent to your email address.
You are only one short step away from reading 5 free Field+ articles.
VIDEO: Denis Hogan signs off with Galway winner

VIDEO: Denis Hogan signs off with Galway winner
By Irish Field Contributor on 30 July 2020
No more race-riding for the up-and-coming trainer after perfect finish at Ballybrit

DENIS Hogan will focus on his growing training operation having announced at Galway on Thursday night that he will no longer ride in races.

Hogan, who is based in Cloughjordan, Co Tipperary, signed off his riding career with a winner, bringing home the well-backed Bua Boy in front in a handicap hurdle at Ballybrit.

Better known now as a burgeoning training talent, Denis Hogan bows out as a jockey after Bua Boy gives him one last winner in the saddle. pic.twitter.com/Aofx57ztqt

“I’ve really enjoyed it and it’s hard to let go,” said Hogan, who is rapidly making his mark in the training ranks with the likes of smart sprinters Sceptical and Make A Challenge.

“I have more things going on nowadays. It’s gone so busy at home and there are days when I can’t think what’s going on as there is so much happening. I wouldn’t even know I’m riding sometimes.

“It’s going so well. The only reason I could do this so long is because I’ve got such a great team at home. I couldn’t have stayed riding for so long if I hadn’t had that back-up behind me.

“My parents have been a massive help. I talked to them once or twice about doing this and they said keep doing it if you enjoy it.”

He went on: “I thought he could win, but you never know until everything goes right in the race. I thought if ever there was time to go and leave the job, it was here at my favourite track. I had a good career, I wouldn’t say outstanding but I rode lots of winners and this was probably my Cheltenham.

“I’m happy to concentrate on the training job now. We have a lot of good flat horses. It was my decision and I’m looking forward to the future now.”

He started out in racing as an apprentice with trainer Michael Halford at the Curragh. The Dark Flasher was his first winner on the flat at Killarney in 2003. His career really began to take off when he switched to jumps and moved to Charlie Swan's yard. It did not take long for Denis to register his first winners and he notched up seven in his first full season over jumps.

For the next five years, he had a very successful association with Swan, riding many winners. In 2009 Hogan took out his own training licence.

In his first season training he had two winners and has steadily increased the number of winners ever since. He continued to combine riding with training and has a reputation for delivering winners on well-backed horses.

In 2015 Hogan set up a second training yard at Cloughjordan, using facilities formerly used by Swan, who has since retired from training. 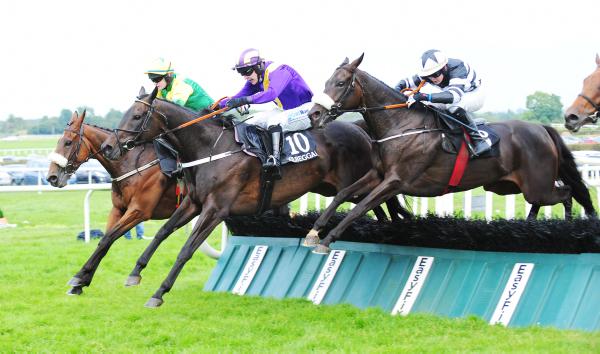