Just one final step...
You must confirm your email address by clicking on the link we’ve sent to your email address.
You are only one short step away from reading 5 free Field+ articles.
VIDEO: Defoe strengthens St Leger claims

DEFOE enhanced his prospects for the Group 1 William Hill St Leger with a clear-cut victory in the Group 3 Betfred Geoffrey Freer Stakes at Newbury.

The Roger Varian-trained colt dispensed with older horses in some style as he took his 100% record this season to four.

To Eternity made the running well into the straight, while Andrea Atzeni had Defoe switched off in last place until asking him to take closer order. The 13/8 favourite made eyecatching progress to go on after Frontiersman had briefly led two furlongs out.

Wall Of Fire tried to challenge on the inside of Defoe but the gap closed and Hugo Palmer's four-year-old had to switch and was three-quarters of a length down at the line. The first two pulled three and a half lengths clear of Frontiersman in third place.

The stewards allowed the result to stand following an inquiry into the incident.

Atzeni said: "He's a gem of a horse. He's very laid-back and you wouldn't think he'd had a race. The horse is getting better and he could be anything. At least we know that he stays.

"The Leger will be a very good race, but this fellow will go there with a big chance. He will also be a nice four-year-old."

Emma Clutterbuck, pupil assistant to trainer Hugo Palmer, said of the runner-up: "The horse has run an absolute blinder.

"He has finished in the first three, which is important in getting qualification for the Melbourne Cup. He is owned by some Australians and that is where they hope he will end up." 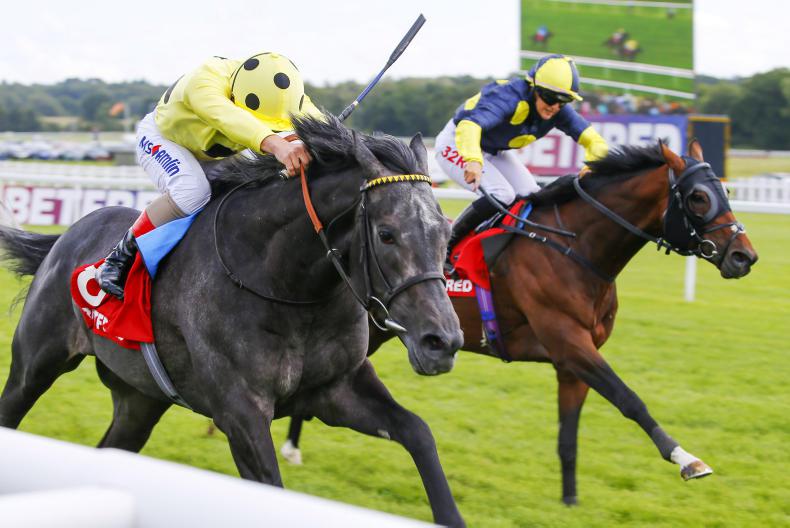