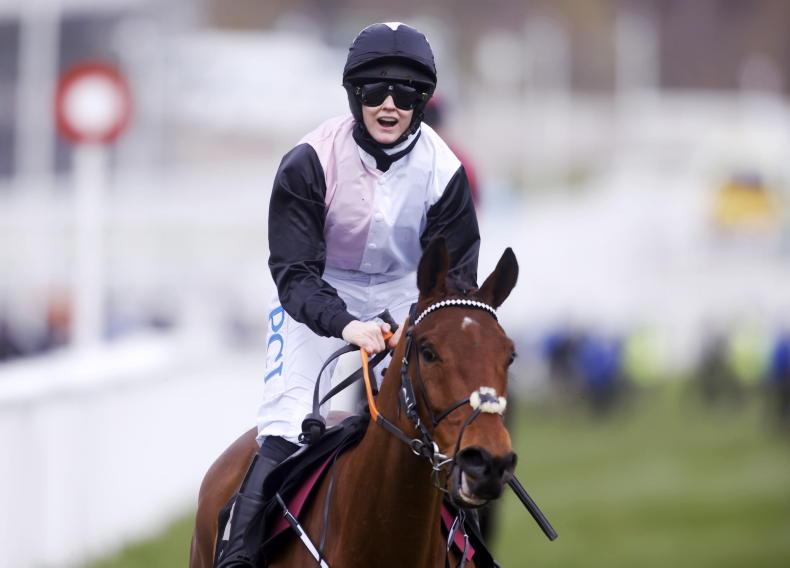 Bob Olinger made it two wins in as many starts over fences when running out a cosy winner of the Kildare Novice Chase at Punchestown on Sunday.

The Grade 3 Kildare Novice Chase goes the way of the exciting Bob Olinger, who makes it two from two over fences in good style as he forges clear under @rachaelblackmor for @HenrydeBromhead and @BrianAcheson ?? pic.twitter.com/w4sTzs0ekK

The seven-year-old, a dual Grade 1 hurdles victor last term, had triumphed on his chasing bow at Gowran in November although his jumping was not faultless on that occasion.

However, he turned in a more assured round of fencing in this Grade 3, with Rachael Blackmore content to maintain a watching brief in the early stages as Lifetime Ambition and Capodanno set the early gallop.

With three fences down the back straight omitted due to the sun, it was a long run to the third-last with Bob Olinger clearly travelling well for Blackmore.

However, she had to start pushing on the 1/2 favourite turning in, but once Bob Olinger found top gear he swiftly put the race to bed, clearing the last in fine style before coming home four and three-quarter lengths ahead of the game Capodanno. Gaillard Du Mesnil plugged on for third, beaten a further 27 lengths.

Bob Olinger is now the evens favourite for the Turners Novices’ Chase at Cheltenham with bookmakers.

De Bromhead was delighted with Bob Olinger’s performance and felt he had progressed from his Gowran victory.

He said: “He was really good and Rachael was really happy with him. He jumped great and it was a class race.

“He’d come on a hell of a lot since Gowran and I think the experience he got there has really stood to him.

“The second is obviously a good horse and the pair of them have pulled clear. Thankfully our man kept going.”

De Bromhead is now looking towards Leopardstown next month for Bob Olinger, if conditions allow.

He added: “The Dublin Racing Festival is the plan subject to ground. There would want to be a good ease in the ground. It seems our best option. It’s three weeks and I think that’s the plan at the moment.

He’s got a lot of class and a great attitude.”