Just one final step...
You must confirm your email address by clicking on the link we’ve sent to your email address.
You are only one short step away from reading 5 free Field+ articles.
VIDEO: Big York double for Norton and Johnston

VIDEO: Big York double for Norton and Johnston
By Irish Field Contributor on 09 July 2020
Thunderous and Rose Of Kildare won the Dante and Musidora Stakes respectively for the same trainer-jockey combination

Thunderous edged out Highest Ground in a thrilling finish to the Al Basti Equiworld Dubai Dante Stakes at York on Thursday.

A big race double on Knavesmire for Franny Norton and Mark Johnston ??

The Night Of Thunder colt battled on courageously to wear down Sir Michael Stoute’s unbeaten three-year-old and complete a big-race double at odds of 59/1 for trainer Mark Johnston and jockey Franny Norton. They had taken the preceding Musidora Stakes with Rose Of Kildare.

Thunderous showed he had come on for his belated seasonal debut at Newmarket 12 days earlier- when he had lost his 100% record.

He was handily placed as Cormorant made the running and kept his position as they headed for home in the straight, before Highest Ground (8/11 favourite) hit the front.

But the latter could not put the race to bed, and Thunderous (13/2) knuckled down to his task and got on top in the dying strides to score by a neck. Juan Elcano was two lengths away in third place.

Charlie Johnston, assistant to his father, said: “That was fantastic. He’s had his ups and downs, this horse – he was unbeaten as a juvenile and then had an injury after winning at Newbury (in August), just as we were starting to dream of races like the Royal Lodge and the Vertem Futurity Trophy.

“He had another setback in March – although the consequences of that weren’t quite as dramatic, because there was no racing in the early part of the year.

“Certainly when we left Newbury last year we felt he was a Derby horse. Just the way things have panned out, we’ve never had a clean run at that, but he’s a horse we’ve always thought a huge amount of – and he’s got a big future.

“He’s very laid-back, and we were quite rushed getting him to Newmarket. The picture has been changing so fast this year, it’s hard to make plans – but when it was announced that this race would move to this slot, we felt it was a good place for him.

“We knew going to Newmarket he was short of 100%, but knew running him there would give us the best chance of winning here today – that’s how it’s proved.”

On future plans, Johnston added: “We’ll have to look at Group 2s and Group 1s now. His attitude and racing style would suggest he could be (a St Leger horse), (but) his pedigree wouldn’t give you a lot of confidence for that sort of distance.

“It’s great to be back at York. Everything is very different – prize-money is not what it would be, but everyone is trying to make the most of this difficult situation. These races still matter a huge amount, and to win them both today still means a huge amount to the team.”

Norton said: “We’d normally be coming out of today with the favourite for the Oaks and the Derby! We’ll see where we go from here. He was off the bridle, but he was behind the bridle a little bit at Newmarket as well. He had to dig in deep today, but he did.

“I was quite confident and comfortable where I was. He loved that ground, and I think there’s more to come – I don’t think he’s quite there just yet. He’d stay further, but we’ll find out how he is when we get him home – whether he’s sharpened up. He’s obviously taken a step forward from Newmarket.”

Rose Of Kildare rallied in admirable fashion to take the Tattersalls Musidora Stakes.

Rose of Kildare relishes the step up in trip and clears away to win the Group 3 @Tattersalls1766 Musidora Stakes for Franny Norton and Mark Johnston ???? pic.twitter.com/t4NMecfD7o

Making a quick return on the back of finishing third at Epsom on Saturday, the Mark Johnston-trained filly defeated some unexposed types to land the Group 3 honours.

Franny Norton had Rose Of Kildare out in front from the start and set a steady pace before the tempo increased in the straight.

She was soon headed by Dubai Love and Ricetta, but Rose Of Kildare (7/1) found more in the final furlong to go on again and win by two and a half lengths. Albaflora (8/1) stuck on well to grab second, with the 13/8 favourite Ricetta third.

Norton said: “It was a good performance, because it was a quick turnaround from Epsom, where she ran very well. She hit a bit of a flat spot, but she picked up again and ran right to the line.”

The filly was bought at Tattersalls Ireland for €3,000 by Johnston’s son and assistant, Charlie. He said: “She’s taken us on an incredible journey and one we’re so proud of, really.

“We’re very fortunate to train for some of the most influential and powerful owners in racing – but at the same time, to have a syndicate of 20 owners with a filly like this is fantastic.

“We left Germany very frustrated – she should have won the German Guineas. When the Epsom race cut up we felt we had to run, because it was another good opportunity for black type.

“We left Epsom kicking ourselves a bit, thinking we shouldn’t have run, because we knew she’d improve for a mile and a quarter- and this was a good race for her. But as we always say, they are racehorses and they’re there for racing.

“She pulled it out of the fire today. There’s not a lot of her, and when we weighed her on Sunday morning we were hesitant to bring her here – but she’s very, very tough.

“I’m not sure where we’ll go. She’s won three Group 3s now, so we have to go up in class – I’m trying to rack my brains for a Group 2 at this kind of trip against her own sex.

“Do we look at the Nassau (at Goodwood)? I don’t know. She owes us nothing, and we’ll get home and enjoy today.”

Johnston senior was at Newmarket, where he told ITV Racing: “(That’s) absolutely fantastic. We ran her at Epsom last Saturday and then regretted it, because it looked like she clearly wanted further.

“We said we should have saved her for the Musidora – and we thought, why not, let’s run her in the Musidora.

“We ran her in the Guineas and we took her for the German Guineas – which had been her target all along – and she was very unlucky there.

“One of the owners in the partnership said he wished we had her in the German Oaks. We looked at that. It’s a €50,000 supplement, but we won’t rule it out. It’s the sort of thing she could win, and to get a Group 1 would be fantastic.” 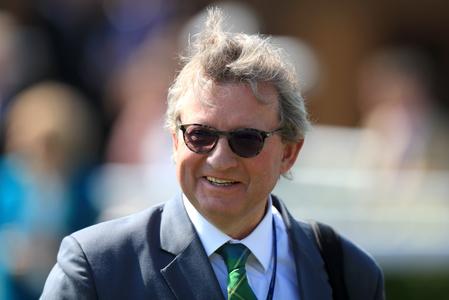