Just one final step...
You must confirm your email address by clicking on the link we’ve sent to your email address.
You are only one short step away from reading 5 free Field+ articles.
VIDEO: Benbatl romps to victory at Meydan

VIDEO: Benbatl romps to victory at Meydan
By Irish Field Contributor on 09 January 2020
One of the top-rated flat horses in the world, Benbatl looks set for another lucrative campaign in Dubai

Multiple Group 1 winner Benbatl predictably outclassed his rivals on his return to action at Meydan on Thursday.

Saeed bin Suroor’s stable star won the Dubai Turf, the Grosser Dallmayr Preis in Germany and Ladbrokes Stakes in Australia in 2018 – and rounded off his campaign by chasing home the wonder-mare Winx as she claimed a historic fourth victory in the Cox Plate.

Last season was not so straightforward for Benbatl, as he did not reappear until September – and while he looked as good as ever when making a winning return in Newmarket’s Joel Stakes, he floundered in the mud when favourite for the QEII at Ascot.

Making his first competitive appearance since finishing last of 16 runners on Champions Day, the six-year-old appeared to face a fairly straightforward task in the Group 2 Singspiel Stakes – and was priced up accordingly as the 1/8 favourite.

Benbatl was soon bowling along in front in the hands of Christophe Soumillon and the result was scarcely in doubt as he readily extended clear for a facile success.

“He ran really well and I’m happy with him,” said bin Suroor. “He showed plenty of speed tonight. He was in front all the way and was travelling really good.

“There was a little question mark about the [rain-softened] ground, but the way he finished off the race was really good.”

The obvious target for Benbatl would be for him to try to regain his Dubai Turf crown on World Cup night, but his trainer was non-committal when asked whether that would be the primary objective.

“We’ll keep the options open for him for the future. He was around 90% fit and he will improve from this race,” bin Suroor added. “That (Dubai Turf) could be an option, we’ll leave it (a decision) until later.”

There was further success for Godolphin in division one of the Longines Conquest Classic, with Charlie Appleby’s Zakouski bolting up in the hands of William Buick.

A winner on debut at Kempton in November 2018, the son of Shamardal had raced just once since – finishing fifth in last year’s Craven Stakes at Newmarket.

Having been gelded during the intervening period, the four-year-old was the 10/11 favourite on his first start in a handicap and extended clear in impression fashion.

Appleby said: “We came in here with a lot of confidence tonight – he shows a lot of talent at home. We ran him in the Craven and he was a bit disappointing, so we gelded him afterwards. The family have got a lot of talent, but they have their quirks.

“I felt the conditions would suit him out here and we felt we’d use his (handicap) mark and progress and get confidence. Hopefully we’ll have a fruitful career when we get back to the UK.”

Satish Seemar’s Commanding (13/2) came out on top in a thrilling three-way finish to the UAE 2000 Guineas Trial under Richard Mullen.

Only fifth on his return from a lengthy absence on dirt a month ago, the high-class sprinter – runner-up to Blue Point in a Group 3 at last year’s Carnival – was a different proposition back on the turf, winning with plenty in hand. 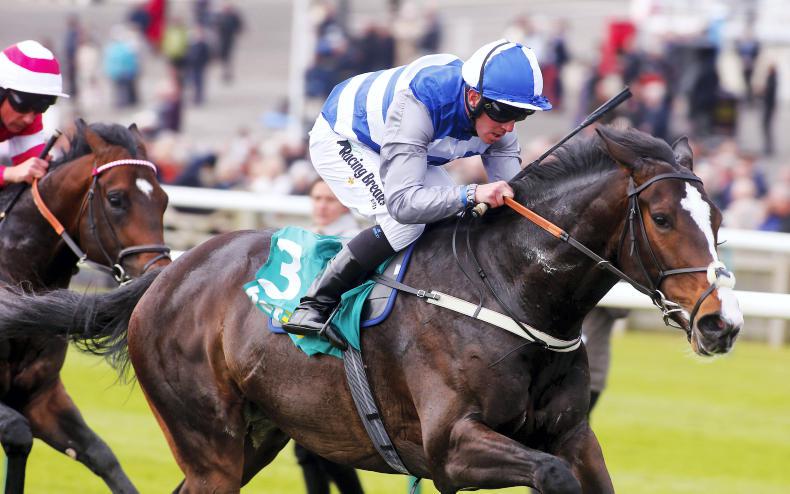 Racing News
BRITAIN: Eminent emerges with classic claims
By Ian Carnaby on 21 April 2017
More in Latest News
News FREE
VIDEO: Treble for Aidan O'Brien and Seamie Heffernan at the Curragh
News FREE
VIDEO: Curragh success for Elysium and A Step Too Far
News FREE
VIDEO: Majestic Dawn wins Cambridgeshire at 40/1
Classifieds
Place ad
Get full unlimited access to our content and archive.
Subscribe to The Irish Field
Unlimited access to The Irish Field via your computer, mobile device, tablet or newspaper delivered to your door.
Subscribe now +
Already a subscriber? Sign in