Just one final step...
You must confirm your email address by clicking on the link we’ve sent to your email address.
You are only one short step away from reading 5 free Field+ articles.
VIDEO: Baron Samedi surprises Vintage Crop rivals

VIDEO: Baron Samedi surprises Vintage Crop rivals
By Irish Field Contributor on 25 April 2021
A review of Sunday's card at Navan, where there were listed race wins for Measure Of Magic and Rocky Sky

Baron Samedi continued his winning ways when springing a 20/1 surprise in a dramatic renewal of the Vintage Crop Stakes at Navan on Sunday.

Baron Samedi denies Emperor Of The Sun to make it SIX in a row after landing the Group 3 Vintage Crop Stakes for @JosephOBrien2 ?? pic.twitter.com/wXGpEV5nKO

The Joseph O’Brien-trained four-year-old came from last to first to record a sixth consecutive victory in this Group 3 heat over a mile and three-quarters.

There was no fluke as Baron Samedi lifted this prize off a mark of 112, having started last term on a rating of 65, to give jockey Dylan Browne McMonagle a first group-race winner at his first attempt.

Baron Samedi led home a one-two for O’Brien, whose Master Of Reality was second after landing this race in 2019.

There was early drama with Sunchart jinking and unshipping Andy Slattery on leaving the stalls. The jockey was able to walk away while Sunchart continued riderless.

Emperor Of The Sun and Master Of Reality took the remaining five runners along with the latter going on two furlongs out.

However, Baron Samedi was delivered from the rear to hit the front and defeat his stablemate by half a length. Emperor Of The Sun was third with Santiago, the 8/13 favourite, only fourth.

O’Brien’s assistant Brendan Powell said: “He’s one of those unbelievable horses that has kept improving.

“Even turning in, a few lads said ‘you’re beat here’, but he never knows when he’s beat. He seems to love a fight and he keeps quickening up.

“It was Dylan’s first ride in a group race, and a winner. He’s a smashing rider for a young lad.

“That’s the quickest (ground) the horse would have run on, but he said he seemed to float away on it.

“He just kept pulling out that bit more and you just don’t know when he’s going to stop improving.

“He’s filled out this year and he’s a bigger horse. He just keeps improving all the time.

“You never know, he could end up going to Australia with the others.”

?? "I'm sure my family were shouting down the TV for me."

Rocky Sky ran her rivals into the ground to register a convincing success in the Irish Stallion Farms EBF Salsabil Stakes.

Surprise in the Listed @IrishEBF_ Salsabil Stakes after Rocky Sky gets up to win in great style for @rosullivan82 ?? pic.twitter.com/ug7dwmMyuX

Having her first run on turf after three races on Dundalk’s the all-weather surface, the Ross O’Sullivan-trained filly was given an enterprising ride by Gary Halpin to win this listed contest in tremendous style.

Rocky Sky (33/1) was soon driven up by Halpin to grab the lead and set a strong pace. The Rock Of Gibraltar filly, owned by retired jockey Mick Kinane’s wife, Catherine, then slipped the field on the home turn.

She kept up the gallop to cross the line four and a quarter lengths to the good over another 33/1 shot in French Fusion. Sacred Rhyme (12/1) was a length and a quarter back in third place.

Willow, the Aidan O’Brien-trained 5/4 favourite, appeared to have every chance but was well-beaten in seventh.

“She’s a grand filly. I thought the handicapper was very lenient on her when he gave her 83 after she was second to a very nice filly of Joseph’s (O’Brien’s My Generation) the last day in Dundalk, albeit in a messy race,” said Halpin.

“I knew coming here today that stepping up in trip and getting on to the grass, she’d be very competitive.

“She’ll come forward again from today. She’s an exciting filly and it’s very nice to ride a winner for Mr and Mrs Kinane and all the team at Castlefarm Stud.

“She’s a very nice filly going forward. She has plenty of pace and I’d say a mile-and-a-quarter is OK for now, I wouldn’t be in any rush to go a mile and a half with her as she has loads of pace.

“She hasn’t done anything wrong so far and the world is her oyster at the minute. She’s a good filly.”

Measure Of Magic got up close home to claim listed honours in the Committed Stakes.

Measure Of Magic outpaces Logo Hunter to land a winning return in the hands of @BenCoen2 for trainer @JohnnyMurtagh ?? pic.twitter.com/zNSf17eiSe

The Johnny Murtagh-trained filly was produced with a determined challenge by Ben Coen to collar Logo Hunter.

Coen kept Measure Of Magic off the early pace set by Erosandpsyche, with Sister Rosetta close up, before making his move.

Logo Hunter and the 6/5 favourite Lipizzaner looked like fighting out the finish, but Measure Of Magic (11/2) responded to Coen’s urgings to go and land the spoils by three-quarters of a length.

Runner-up Logo Hunter was a length and a half ahead of Lipizzaner.

Coen said: “She only got five last year, but she’s strengthened up from two to three well.

“I rode her to get the trip, she quickened up well for me, but she didn’t do much when she got there.

“She’s a nice filly, a proper sprinter with loads of speed. Five or six, it doesn’t matter to her as she’s strong enough now to stay six.

“She loves the ground, she’s a good-moving filly. Hopefully she’ll improve again off the back of that.”

Masseto put up a gutsy performance when making a wining debut in the Irish Stallion Farms EBF Maiden.

Gavin Ryan brought Masseto (4/1) with a sweeping run in the centre of the course and Donnacha O’Brien’s youngster knuckled down in the closing stages to get the better of Celtic Times by half a length.

The pair pulled four and three-quarter lengths clear of Butterfly Island in third.

Amalfi Coast, the 13/8 favourite, could not get a run at a crucial stage of the race but stayed on well to take fifth place.

Masseto, a son of Territories, could head for the Coventry Stakes at Royal Ascot.

O’Brien said: “I thought he was very good because he was very green. He broke slow and travelled in snatches.

“When he quickened up, it looked like he passed half the field in half a furlong and then he looked like he idled when he got there. He’s obviously got plenty of talent.

“Looking at that, you’d have to hope he’s an Ascot two-year-old. On paper it looked like a good race, I know Dad (Aidan) liked his and (brother) Joseph liked his. There were plenty of other nice pedigrees in there.

“I suppose you’d have to look towards the Coventry. He was very green, we’ll see how he comes out of it, then have a look and see what suits him. I don’t think it would be any harm if there was another race beforehand.

“The first two-year-olds I ran were the ones I actually liked most, nearly, but maybe I ran them a bit early and they’ll be better as they come along.

“The last two I’ve run have been impressive, so maybe they are just coming.”

Independent Missy (5-1) got on top in the last 100 yards to take the Irish Stallion Farms EBF Fillies & Mares Handicap.

Ronan Whelan brought Tracey Collins’ five-year-old with a well-timed challenge to go on and win by half a length from Miss Molly T.

Collins said: “I’m delighted. She’s probably been a little bit disappointing for us because we expected more of her early on.

“She’s come well in her coat and was pleasing us, so we decided to come here as it was a fillies’ handicap.

“Ronan’s given her a lovely ride and she came off the pace well, so she probably just needs a very strong run race.

“She was only beaten a few lengths in some good races. She’s probably a filly that lacked confidence and hopefully she can go forward from here.”

Gordon Bennett (13/2) ran out a ready winner of the Kilberry Apprentice Handicap.

Hitting the front a furlong out, Richard Brabazon’s three-year-old galloped on strongly for Nathan Crosse to score by a length and a half from The Peckhampouncer.

“That was a bit of excitement at the start of the season for us,” said Brabazon.

“We always thought he was a lovely horse, but he’s a horse that gets himself a bit upset and he was running too free in his maidens last year.

“He was just doing it the wrong way around, showing tons of speed and then not getting home.

“I said to Nathan today ‘just do one thing, try to get cover and then take it from there’. He did it beautifully and the horse settled for him. I was nearly more thrilled about that than winning because looking to the future, we can manage him a bit now.

“I think he’s a nice horse for the future. Physically and mentally we are only starting.” 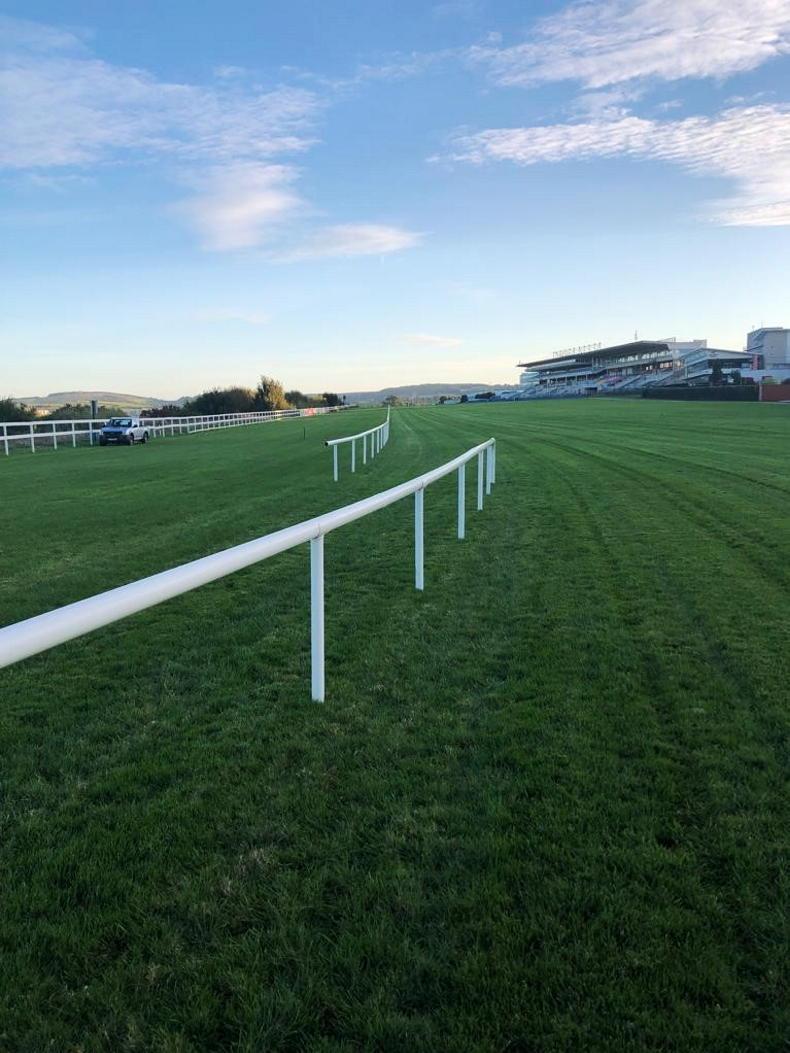 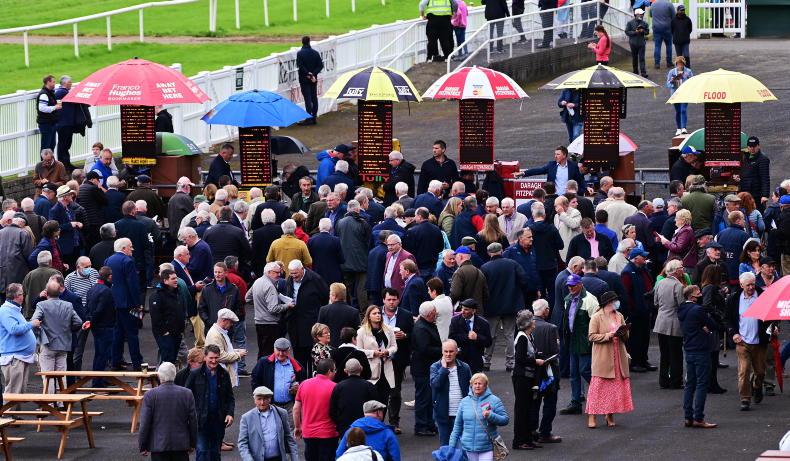 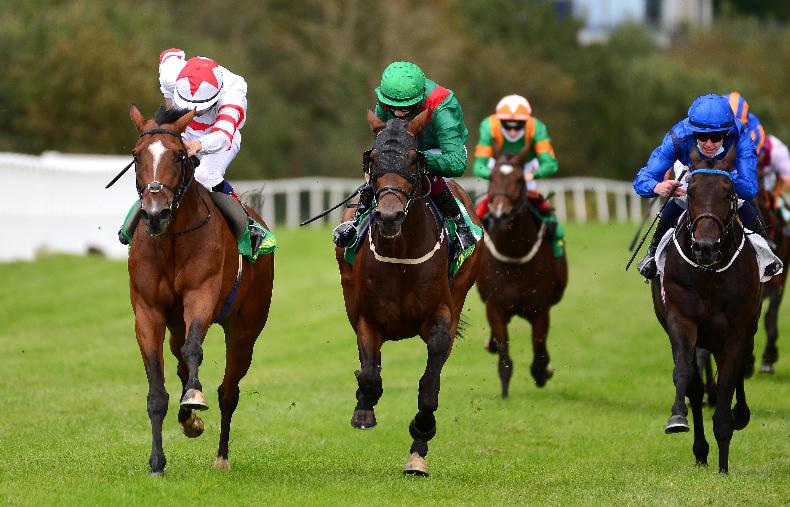 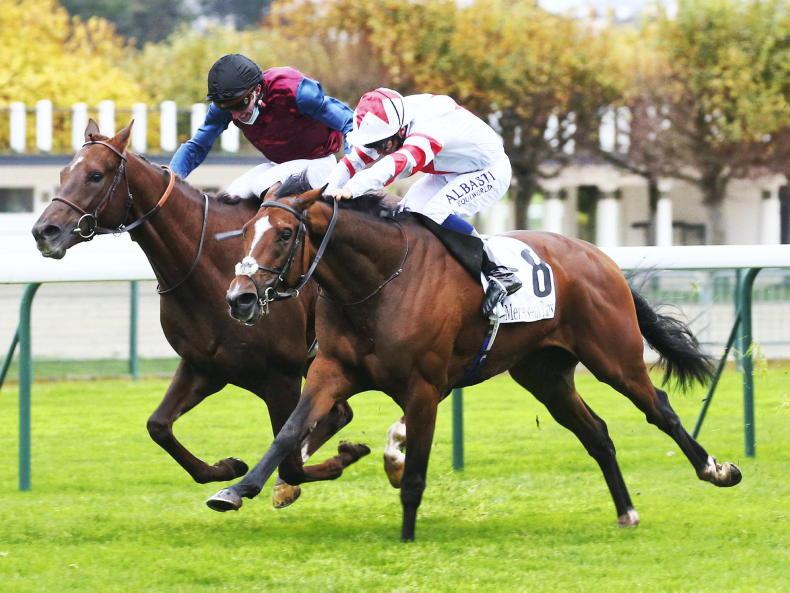 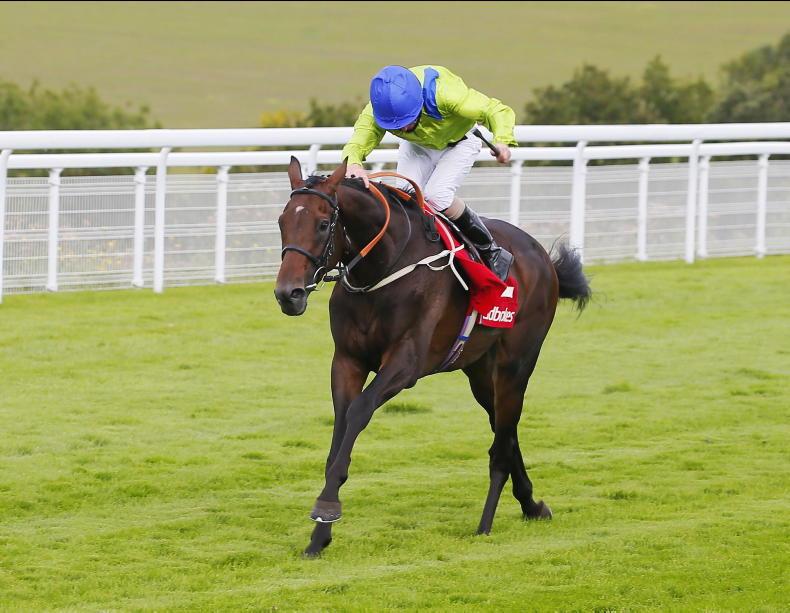