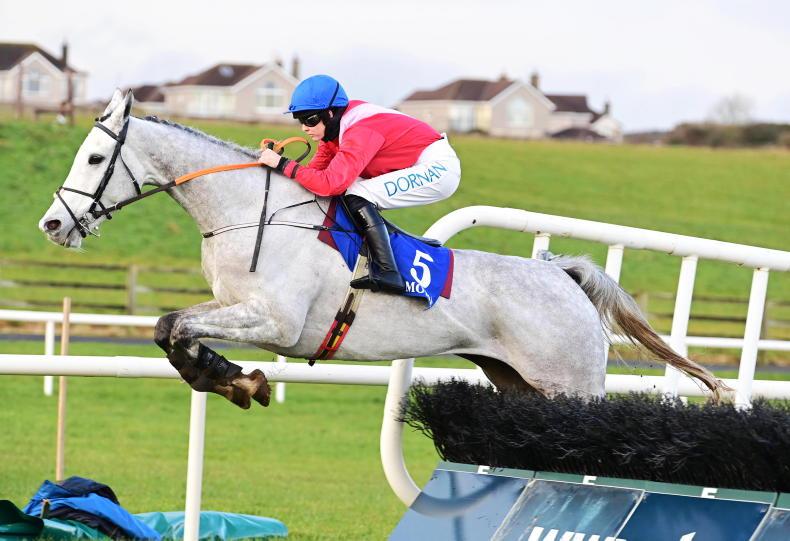 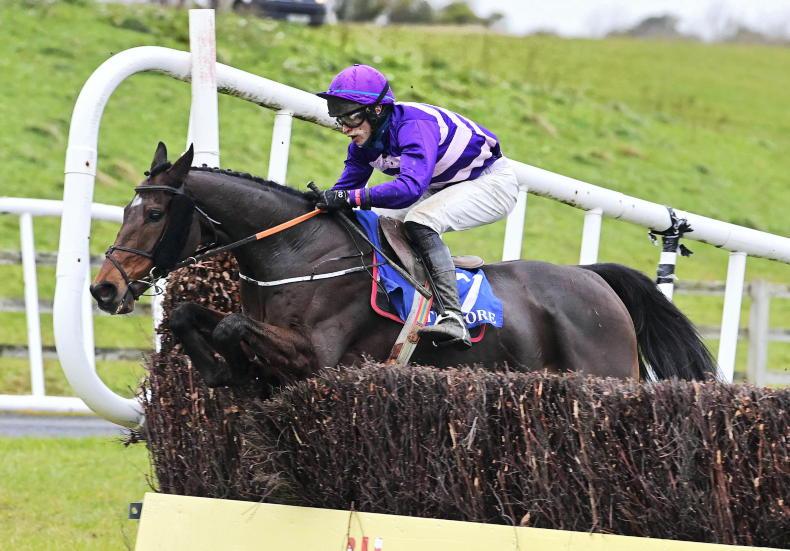 LOCAL trainer Henry de Bromhead and Rachael Blackmore teamed up for a 43/1 double in the two maiden hurdles on the card with Guily Billy and Brampton Belle.

Guily Billy defied a lack of market confidence when readily landing the opening Get Your 2022 Annual Badge At Tramoreraces.ie Maiden Hurdle. The grey son of Coastal Path, bought by Cheveley Park Stud for £310,000 last December after winning a point-to-point for Donnchadh Doyle, but beaten at odds of 1/3 on his hurdle debut at Clonmel, got his career firmly back on track here.

The easy-to-back 13/8 chance took command from the penultimate flight and stretched right away up the hill to beat Hauturiere, who got in as second reserve and was sent off the 11/8 favourite, by all of 25 lengths.

“That was a much better performance and what we were hoping he would be able to do. He’s a lovely horse and you would think he’ll be going chasing at some point. Hopefully he’ll progress now,” said Blackmore.

Brampton Belle opened her account at the second attempt in the Buy New Years Day Tickets Online At Tramoreraces.ie Mares Maiden Hurdle. The friendless 16/1 shot asserted before the last and kept on well to beat Mi Lighthouse by two and three-quarter lengths.

“She was quite keen the last day but settled better today. She was a little bit green in front at times but you would expect that and she galloped all the way to the line,” said Blackmore, sporting the Honeysuckle colours of Kenny Alexander.

THERE was also a locally trained winner of the Book A Table For New Years Day Mares Handicap Hurdle where Derek McGrath partnered his first winner since turning professional, aboard Powerful Out.

The 7/1 victory appeared unlikely for much of the two-mile event with the John Kiely-trained mare detached in rear. However, she made significant headway at the second last and finished with a flourish to collar 2/1 favourite Robyndeglory by a length and a quarter.

Dungarvan-based McGrath said: “To be honest I was worried coming down the hill thinking I was after leaving it too late but she has plenty of pace. John said to drop her right out and it worked a treat.

“It’s great to have a local winner with John and Conor (Lannen, owner). John Kiely goes back a couple of generations with our family. He had horses for my grandparents and rode winners for them as well, so I’m delighted to get a winner back for him. I rode a few point-to-point winners, and a couple of winners on the track as an amateur.”

Declan Queally, out of luck with Robyndeglory, also had to settle for the runner-up spot with another favourite as Kingston Kid edged out 10/11 chance Lovely Moon by a head in the John & Peter Queally Special Recognition Award Handicap Hurdle.

The 12/1 winner, trained by Eugene O’Sullivan and ridden by his daughter Maxine, was enthusiastically greeted back by her owners, the Kingston Hill Partnership.

“He’s a lovely little horse who has progressed greatly. I’m delighted for the lads who own him and are local to us at home,” said Maxine O’Sullivan before adding, “I was a bit worried down the back but I know he stays really well. I kept him wide for a bit of nicer ground and it suited him.”

LESSOFDNEGATIVITY, formerly trained by the recently deceased Andrew McNamara and now in the care of his son and namesake, recorded a poignant win in the Lady’s Cove Handicap Chase.

Available at 25/1 overnight, the well-backed 7/2 chance was prominent throughout under Paddy O’Hanlon and held off Arctic Ambition by a length and a half.

“Henry Lappin (part-owner with Michael Fay) was a friend of Dad’s from college and would have had horses with him for years,” said Andy McNamara. “He was a course-and-distance winner (over hurdles) and was well enough in over fences but his form has always been a bit in and out. He’d been working well.

“It wasn’t what we planned beforehand but Paddy was right to change tactics the way the race panned out. He rides out a bit for me and that’s his first winner for me – the first of many, hopefully! He could run at the Limerick Christmas meeting on the same day they run a race in memory of Dad.”

Shes Some Doll (11/2) was also prominently ridden in the other race over fences, the Doneraile Walk Beginners Chase, keeping on strongly on the run-in for Luke Dempsey to beat Earths Furies by four and a quarter lengths.

“She’s a very consistent mare and deserved that. I didn’t really want to be in front but she was jumping and travelling so well and I didn’t want to disappoint her,” said Dempsey of the 11/2 shot, trained by Gavin Cromwell for the Ever Optimistic Syndicate.

The Willie Mullins-trained Viva Devito proved a facile winner of the Garrarus Beach (Ladies Pro/Am) Bumper, drawing clear over half a mile out under Jody Townend and cruising home by 16 lengths from Bugs Moran.

“He’s still a big frame and is going to fill out again next year but is definitely one to look forward to. For a big horse he handled the track better than I thought,” said Townend of the Chris Jones-owned 5/6 favourite. 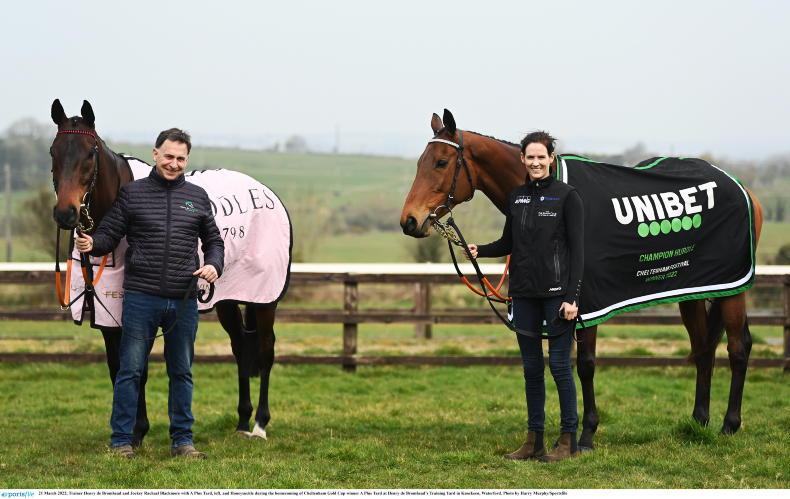 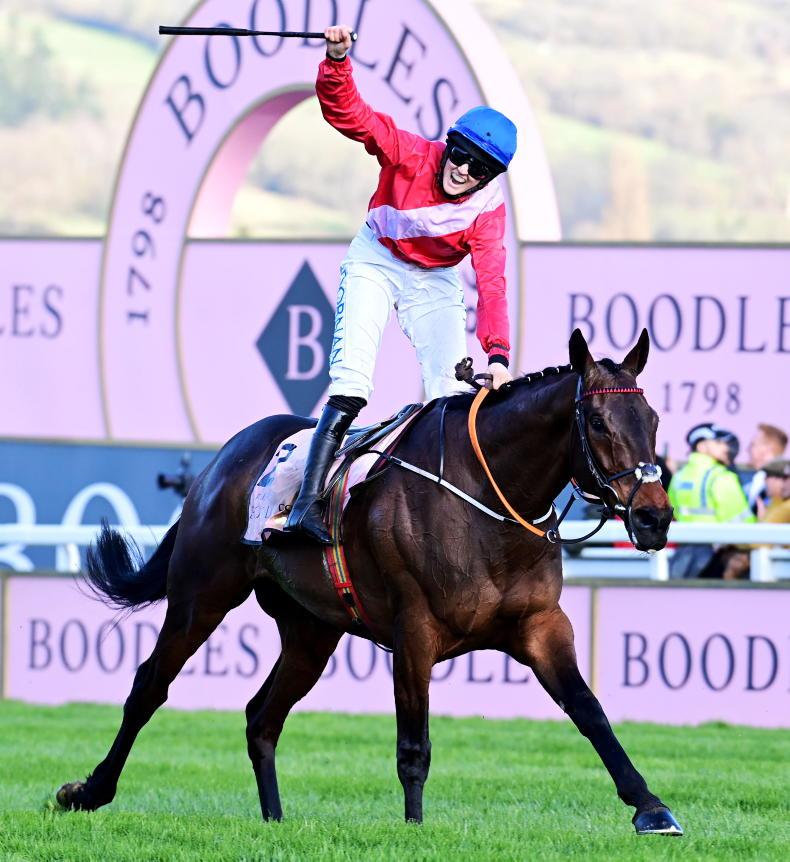 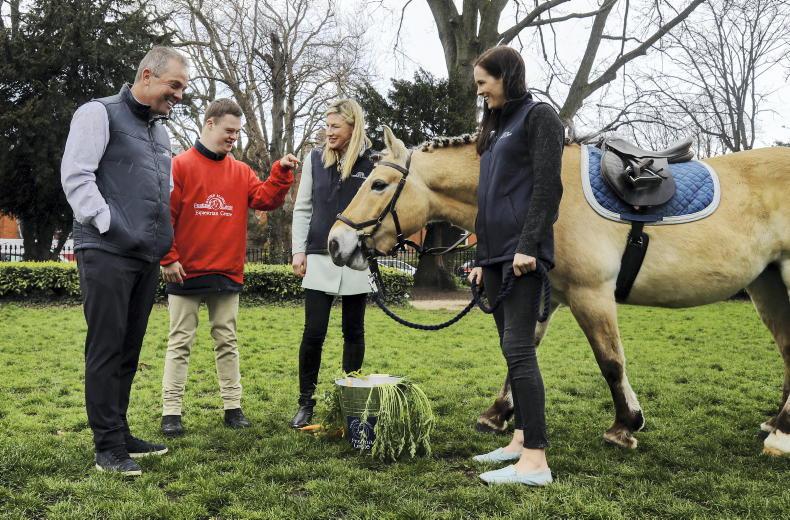