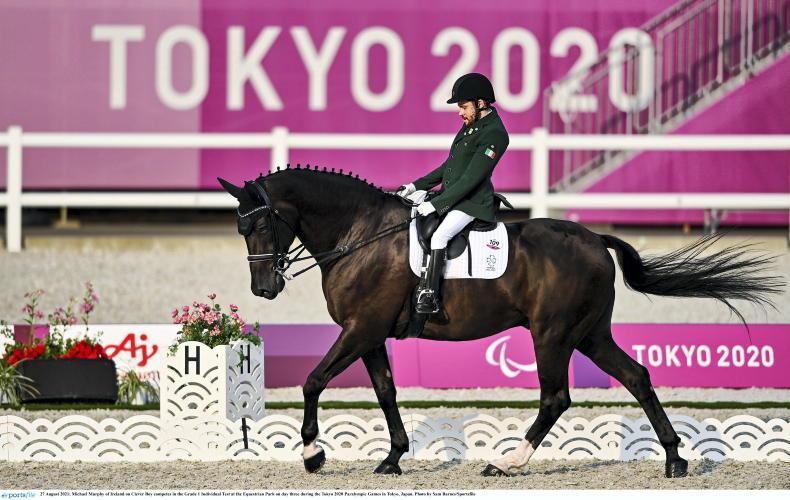 THE Irish para dressage team finished 12th overall in the team competition at the Tokyo 2020 Paralympic Games. Britain took the gold medal, continuing their unbreakable hold on the title which started in Atlanta 1996. The Netherlands won the silver medal, ahead of The Netherlands in bronze.

Michael Murphy and Cleverboy got Ireland off to a good start on Saturday, scoring 75.17% in the Grade I test and they were followed by Kate Kerr-Horan and Serafina T who scored 65.67% in Grade III. The final member of the Irish team, Tamsin Addison and Fahrenheit scored 66.23% in the Grade V team test on Sunday.

Horse Sport Ireland Para Dressage High Performance Director Debora Pijpers said: “I’m very happy that Horse Sport Ireland and Paralympics Ireland supported us in order to be in Tokyo with a complete Irish para dressage team. I’m very proud of all the riders. All of them showed improvements during the competition.

“Michael Murphy showed amazing sportsmanship. After an unfortunate slipping of the right rein during his individual test, he rode a very strong team test that was rewarded with a score of 75.179%.

“During the competition Tamsin Addison showed great improvements in the collection and uphills. Kate Kerr Horan showed the talent of her mare Serafina T in the extended walk and in the expression in trot. Rosemary Gaffney and Werona showed a nice, light and uphill way of going.

“Of course we are all aware of the improvements that we would still like to make. But to be with an Irish team at the Paralympics is for sure a very inspiring and motivational step in the good direction."