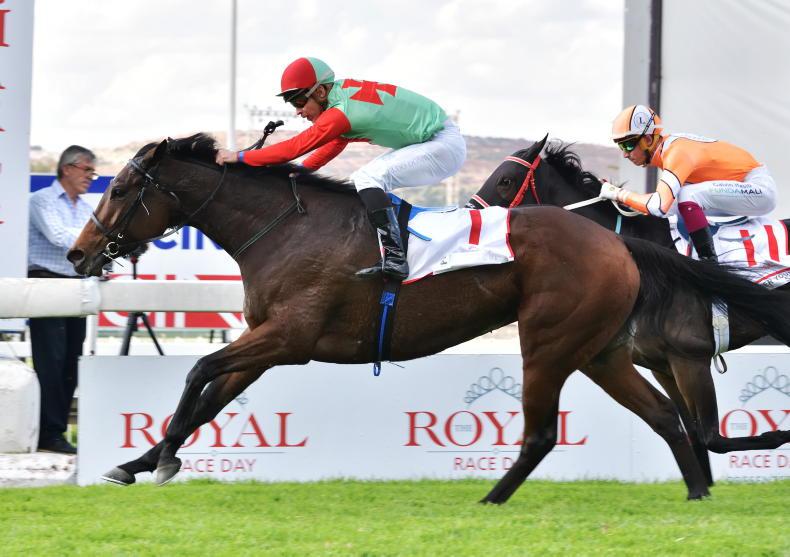 She was well handled by Aldo Domeyer, son of the trainer’s husband Andrew Fortune who was himself a brilliant jockey. “I’m so glad to get my first Group 1 on the board and so grateful to Aldo for making my dreams come true,’ enthused the trainer.

Princess Calla was bred by Maine Chance Farms and made R600,00 (€35,650) at the 2019 Cape Premier Yearling Sale. She is by the successful American sire Flower Alley out of South African Group 2 winner Princess Royal (by Captain Al).

KOMMETDIEDING is odds-on to become the first Cape Town-trained winner in the 17-year history of the Premier’s Champions Challenge at Turffontein today.

The way the Met and Durban July winner ran on over an inadequate trip in the Horse Chestnut last time suggests he should win convincingly but he has the altitude to overcome.

Indeed the Johannesburg course’s 5,550 feet is the reason so few horses trained at sea level have even attempted this 10- furlong Group 1.

And the further the distance the more altitude takes its toll on the horses.

IRISH racing is getting more showing on South African TV’s 240 racing channel now that 4Racing has taken over from Tellytrack. The last-named seemed to have a distinct preference for British all-weather sprints, seemingly because they were able to cram in more of them.

Too much power was given to the studio presenters and on one infamous occasion the presenter blanked out the Irish Derby, declaring: “We don’t want this!”

Now the operators simply switch over to a British racing channel (that includes some Irish racing) once South African racing has finished for the day. The Irish Grand National was shown from start to finish as were some races from Punchestown.

In addition go-ahead bookmaking group Hollywoodbets has made an agreement with SIS to show racing from 35 British courses, and all Irish courses, in its shops and online via www.hollywoodsbets.net.

THE long-running saga involving the ban on direct export of South African horses to Europe is back on again after a two-year break because of Covid-19. The devastating pandemic resulted in the cancellation of the EU audit of animal health controls in South Africa but this has now been provisionally rearranged for October.

Furthermore the EU has said that the audit will be supplemented by a video option if Covid takes off again. The number of new daily infections recently soared from 900 to 4,600 inside a week, although experts are divided on whether this is the start of the dreaded fifth wave or no more than the consequence of Easter get-togethers and the easing of mask requirements.