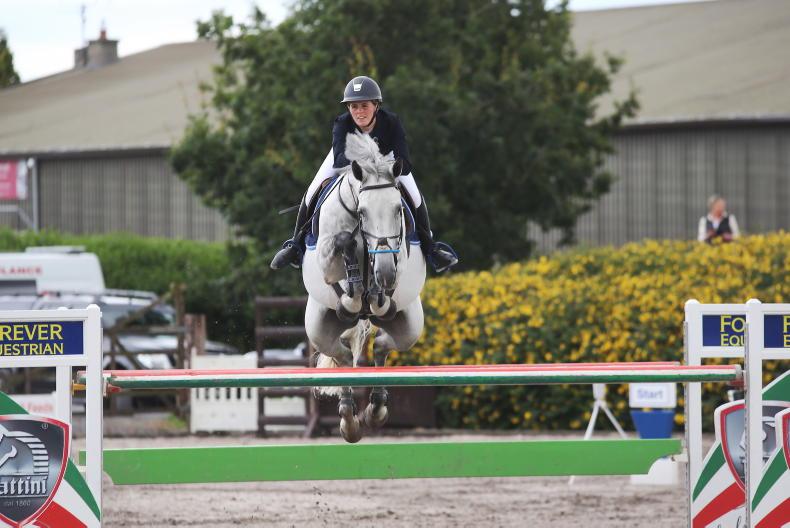 ROBYN Moran put her first win on the board in the Gain/Alltech National Grand Prix series when she was the only double clear of the class aboard Cushlas Fryday at Mullingar Equestrian Centre.

Owned by Vera Griffin and bred by John Peter Finlay, Cushlas Fryday is an eight-year-old gelding by Hector Van D’Abdijhoeve out of the Apache D’Adriers-sired Une Ardente De Vie (SF).

It has been a very good year for Moran, having been crowned the TRM Showjumpers Spring Tour Champion in April with Cushlas Friday. As well as featuring in the regional Grand Prix leagues, the talented Limerick rider has also clocked up results with her other horses, Coolminga Inspector Royal, Fortside Big Bucks, Fortside Trend, Carrowgar Cool Heart and Top Aviator to name but a few.

In total some 53 combinations took up the challenge and the Limerick rider booked her place with 10 others in the jump-off.

Brendan Murphy also had his foot to the floor with the seven-year-old PLS Somers Knight, clocking 43.07, but with one on the ground, he had to settle for third place. Owned by William McDonnell and bred by Michael Byrne, the gelding is by OBOS Quality and is out of the Harlequin Du Carel-sired Lucy’s Harle. This pair took the win in the Studbook Series qualifier at Tattersalls July Show as well as featuring consistently in the Mervue Equine Leinster Summer Tour.

Young rider Luisa Horta Osorio decided to take longer lines with Jasmin Da Hermida, but despite this, she crossed the line carrying four faults in a time of 44.51 for eventual fourth. Owned by Daniel McAlinden, the eight-year-old mare is by Milton Du Murier and is out of the Papillon Rouge-sired Mathilde Hayettes.

Kildare’s Derek McConnell claimed fifth place with Inlaws Manolo, when they came home carrying five faults in a time of 45.69. Owned by Sorcha Hennessy and bred by Tomas Hester, this seven-year-old gelding is by Corland out of the Lord Z-sired Helena De Va Lie.

This combination has been in the ribbons of late, taking the win in the seven-year-old HSI Studbook Series Final in Charleville, second in Mullingar and second in the RDS horse qualifier at The Meadows.

Winners of the round in Omagh, Jonathan Smyth and Crystal Graf added to their leaderboard tally when they finished on eight faults in a time of 41.02 for sixth place.

Owned by Ann Doherty and bred by her late husband Anthony Doherty from Donegal, the 11-year-old gelding is by Lady Graf out of the Graf Magna-sired Lady Graf. Smyth currently tops the leaderboard with Mulvin Light’s Out.