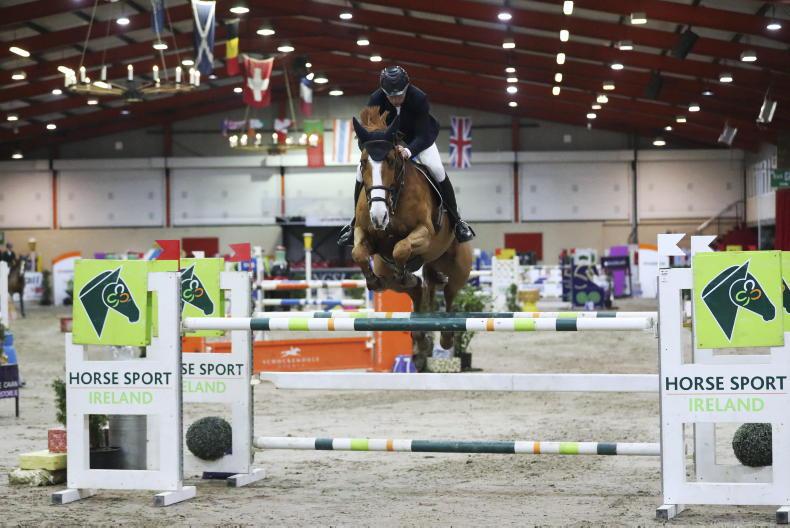 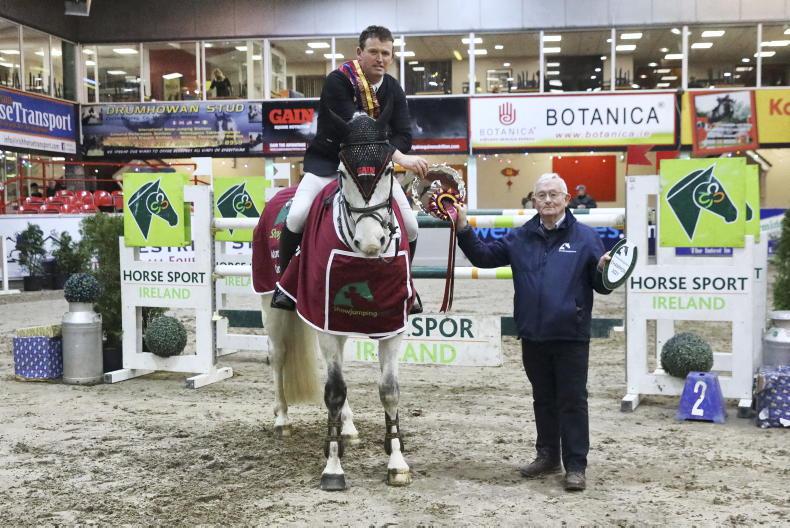 CAVAN Equestrian Centre was the place to be last weekend with massive entries for every event meaning there was constant activity in both arenas from early morning until late evening.

Included in the schedule were Horse Sport Ireland’s Development Series young horse classes for all the age divisions, each offering a prize fund of €4,000, as well as the final of the HSI Autumn Grand Prix league.

Dermott Lennon, riding his own nine-year-old gelding Athletix Hero Z, came out on top in the 1.40m final on Sunday. The pair saw off stiff competition in the 17-way jump-off to take the lion’s share of the €10,000 prize fund.

By Aganix Du Seigneur out of Class Of Touch Hero (Radco D’Houtveld), the gelding was bred in Ireland by Gerry Marron and Luc Henry. He has been showing a good run of form recently, taking third place in the Autumn Grand Prix in Ravensdale at the beginning of December as well as a win in the Eglinton Grand Prix in October.

A total of 59 starters lined out for the final. Four combinations collected a single time fault to deny them a place in the decider, while a further 12 had one fence down for four faults. Four riders had one fence down and added one for time to finish on five faults and the remaining 19 had eight faults or more.

Lennon was 12th to go in the jump-off. Tight turns and accurate riding saw the pair stop the clock at 32.25 to snatch the lead from eventual runner-up, Austrian young rider Josefina Goess Saurau and Happy Girl, who had broken the beam in 34.12 when 11th into the arena.

Jenny Rankin came close to catching Goess Saurau with the Conor Swail owned gelding Lajgardens Cannavaro in 34.32 but had to settle for third place.

Eddie Moloney was crowned the winner of the overall Autumn league after earning four top-10 places in Killossery, Barnadown, Tipperary and Ravensdale with Temple Alice which gave him 23 points.

Speaking after the presentation, he said: “It’s great to have won it. It didn’t quite work out for us tonight but he has been really consistent throughout the league placing in four of the classes so we’re delighted with him.

“I own him with TSI Equestrian. We’ve had him since he was six years old. We bought him from Tholm Keane who produced him as a four and five-year-old. He won the six-year-olds in Dublin and went on to do the seven-year-olds there too.

“He is by Foxglen Cruise Control and out of Innishannon Shamrock by Rantis Diamond. He moved up to 1.40m about 18 months ago and has coped really well. He’s easy to ride and does his job really well.

“He is called Temple Alice so most people think he is a mare; I don’t have any idea why or who named him that but it would be interesting to find out!

“I’m lucky that I have three nice horses at the moment that are ready to move up to 1.50m so maybe in the New Year we will take a trip away to some shows.

“For the moment I’m looking forward to some down time over Christmas, the horses will all go out for a break, it’s nice that we ended the season on a high note with the Autumn league win.”

Northern rider Niamh McEvoy, who is enjoying a great run of form as well as juggling school and upcoming exams, won the leading young rider prize after finishing fourth on Sunday night with Templepatrick Welcome Limmerick. Following the presentation, she said: “It was a really fast class so I’m delighted to feature at all in the top-six. He has been very good all season. I’m very lucky with the horses that I’ve had this year and they’ve given me some great results.

“One of the highlights was winning the bursary class in the RDS. I’ll use that to go and train with Laura Kraut and Nick Skelton maybe next summer so I’m really looking forward to that.

“My prize today gives me €500 to spend on training, I’ve just started dressage training with Anne Marie Dunphy so I will use it to go towards more of that. I’m so lucky with my owners, the Binghams, they are so good to give me this horse to ride, I’m very grateful to have him.

“I’m still in school and have exams next week so the horses will get a break now and I will concentrate on that. I only have the three horses at home so I can manage them alongside my studies quite well. My Mom is quite strict about making sure that school comes first so having the three is more than enough right now!

“I’ll bring them back into work with a bit of hacking in January and then back to proper work in February. We’ve had a great year so hopefully we can keep it up in 2022.”