Just one final step...
You must confirm your email address by clicking on the link we’ve sent to your email address.
You are only one short step away from reading 5 free Field+ articles.
Sheikh Mohammed restocks for Godolphin at Deauville

THE European yearling sales season got off a very strong start at Deauville over the weekend when the average price paid at the two-day Arqana August Yearling Sale jumped by 23.8% from the previous year.

Sheikh Mohammed was a notable attendee and acquired several top lots for Godolphin.

At Sunday's session Anthony Stroud - acting for Sheikh Mohammed - signed for a €1,625,000 Dubawi filly out of Prudenzia, already the dam of Chicquita and Magic Wand.

Stroud secured the filly after a fraught battle with Michel Zerolo (Oceanic Bloodstock). She was bred by perennial leading vendor Ecurie des Monceaux.

Stroud said, “She’s a very nice filly with a wonderful pedigree from an exceptional stud. She’s by a fantastic sire in Dubawi and she’ll hopefully be a good racehorse and a future addition to Godolphin’s broodmare band.

"Sheikh Mohammed came over to the sale this year - he hasn’t been for a long time and it’s fantastic to see him here. His enthusiasm is as strong as ever, this is him buying the horse - I’m just following instructions!”

Also consigned by Ecurie des Monceaux was a colt by top sire Galileo and the first foal out of a sister to Prudenzia. It was the Japanese trainer Mitsu Nakauchida that had the final say at €1,500,000 for this yearling.

Nakauchida explained, “Obviously he comes from a very good family and he’s a very athletic colt. We lost Deep Impact and King Kamehamaha recently in Japan and we’re looking for the next future sires. We want to buy in Europe because of the different bloodlines and we wanted a Galileo. I want to prove that they can run in Japan. I have great owners and have been very lucky.

Very active over the two days, Anthony Stroud also bought a second lot by Dubawi for €600,000 from Haras de la Perelle, as well as a daughter of Dark Angel, the second foal out of Prix Allez France winner Mahem for €800,000 from Ballylinch Stud.

He said, “We like this filly very much and she comes from a very good stud. She looks very racy. We bought her half-sister last year by Invincible Spirit. The Dubawi colt is also very nice and is very athletic. I really liked him,” commented Stroud.

Amanda Skiffington bought two Kingman colts during the session. Lot 129 from Ecurie des Monceaux was knocked down to the agent for €850,000.

Earlier in the evening, she bought a half-brother to group-winning juvenile Goken for €675,000 from Haras de Colleville.

A half-brother by Camelot to the listed placed High Strung from the family of Arc winner Huricane Run made €650,000 also to Mitsu Nakauchida from Camas Park & Glenvale Studs.

"I have always liked Camelot’s progeny and he is very good looking. I’m sure he will run well in Japan. I’ve been coming here for the last three or four years. I am honoured to buy a yearling here."

The hammer fell at €650,000 in favour of Morten Buskop for a half-sister by Galileo to juvenile stakes performer Peace Envoy and Our Last Summer from Haras des Capucines. "She has been bought by Lone Kaj-Nielson. She has had a great year in Scandinavia winning the Swedish

Derby amongst other races with Red Cactus (Hard Spun). She loves to invest in good horses and has a very good relationship with her trainer Bent Olsen.

"Our success started at Arqana started when she bought Brownie that became a champion miler in Scandinavia,” said Buskop.

A son of first-crop sire Shalaa sold for €600,000 to Satomi Horse Company. Lot 122, offered by Fairway Consignment, is a half-brother to listed winner and group placed Penglai Pavilion was signed for by Emmanuel de Seroux.

"He is a beautiful horse with a lot of class. We think Shalaa will be a good stallion. He has a great pedigree and is a beautiful mover with a lot of potential. He will race in Japan for Mr. Satomi. We have a very nice Galileo filly that we purchased last year that should make a good three-year-old,” commented de Seroux.

On Saturday night, a son of Galileo was the most expensive during the session, with lot 23 from Haras d’Etreham selling for €800,000 to Phoenix Thoroughbreds. He is the first foal out of dual group winner Steip Amach.

Tom Ludt said: "When we buy yearlings in Europe, we send them to England to be broken before deciding on further plans. We like to take our time and we’ve got a lot of trainers, so no decisions will be made yet."

The eight top lots during the day were all sold to different purchasers, showing the diversity of

buyers. Godolphin led the way, notably signing for the first foal out of listed placed Siamsaiocht, by Siyouni (lot 8), from Ecurie des Monceaux for €450,000.

Anthony Stroud commented: "She is a very good-looking filly that moves very well. Her sire is an exceptional stallion - I’ve had lots of luck with him - and she was bred at a top stud. All of this makes her a very attractive prospect. She will run in the Godolphin colours."

Lot 68 was also knocked down to Stroud from Haras de la Perelle. He was another son of the in-demand Galileo and the second foal out of dual Group 2 and Group 1 Matron Stakes runner-up Cladocera. He was bought for €750,000.

“He’s a very nice yearling - and I hope he will be on the racetrack! He’s very athletic by a wonderful stallion in Galileo out of a group winning mare.”

Second on the overall buyers' list, Shawn Dugan had the last word when going to €700,000 for lot 4, from the family of black-type performers Plumania, Plumatic and Left Hand from Ecurie des Monceaux.

"She’s absolutely stunning, obviously. We went a lot higher than we wanted to but she’s just gorgeous. There’s nothing wrong with her, the stallion’s on fire and the family is live, that’s all I can say. We’re very happy. She’s been bought for an undisclosed client of mine but she will stay in training in France as she is a French bred. She’s an absolute stunner."

Dugan also bought the half-sister to Fleeting (lot 54) for €400,000 from Haras d’Ombreville. "She’s a lovely filly from an excellent family, half-sister to one of the best fillies in Europe. Her new owner is very happy! She was born in late April, so she’s going to blossom a lot still hopefully. She’ll stay in France to go into training.”

The eagerly awaited lot 21, offered from Ecurie des Monceaux, is a half-brother to Prix du Jockey Club winner Sottsass, Sitercharlie and My Sister Nat. He was sold for €700,000 to David Redvers.

"I was on the phone to Sheikh Fahad in California where he is watching proceedings, and I’m thrilled to get a horse like that. He is the type of horse he is now looking for - we’re breeding a lot of our own but we want to fill in the gaps and find these kinds of horses. He’s a world class horse at a world class sale.

"I haven’t had a chance to discuss plans with him yet, but one thing is for certain, he will go to a trainer who deserves him."

Offered from the Fairway Consignment (lot 49), the daughter of Siyouni out of listed winner and group placed Apple Charlotte was sold for €650,000 to Jason Litt. She’s a half-sister to group placed Lottie.

“Clearly a lot of people liked her as well and we’re delighted to have her. She’s been bought for LNJ

Foxwoods. She’s a lovely filly - we prefer to buy them first before making any plans to her future! We’ve had a lot of success with horses bought from Arqana.”

A half-sister by Frankel to group winner Nordic One and Family One was bought for €535,000 by Justin Casse. Consigned by Haras des Capucines, she is a daughter of listed winner Ascot Family.

“If she does as well as War Of Will she will be worth her weight in gold. She stood over a lot of ground, she moved really well and had a lot of quality to her.

Frankel’s been very good to me, I’ve bought some stakes horses by him. She’s got residual value and looked the part.”

Consigned by Camas Park & Glenvale Studs, a son of Invincible Spirit and the Prix de Flore winner Albisola was knocked down for €450,000 to Emmanuel de Seroux (Narvick International) on behalf of Satomi Horse Company.

“He’s got an exceptional physique and is very athletic. We saw him at the stud a few weeks ago and wanted to buy him. He will probably race in France - I’ve bought him for the Satomi Horse Company. Mr Satomi has had lots of success in Japan and would like to have some quality horses in Europe."

Part II of the sale takes place on Monday.

FULL REPORT IN THE IRISH FIELD NEXT WEEKEND 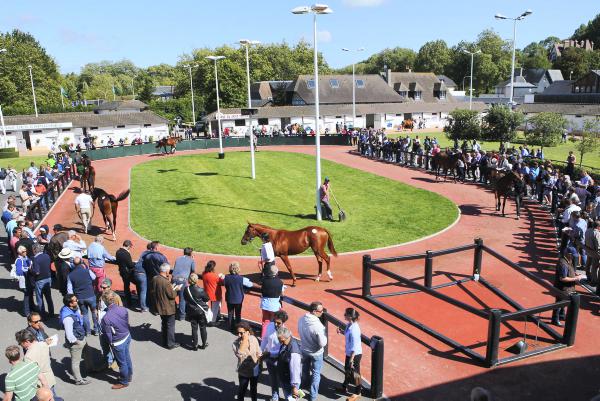 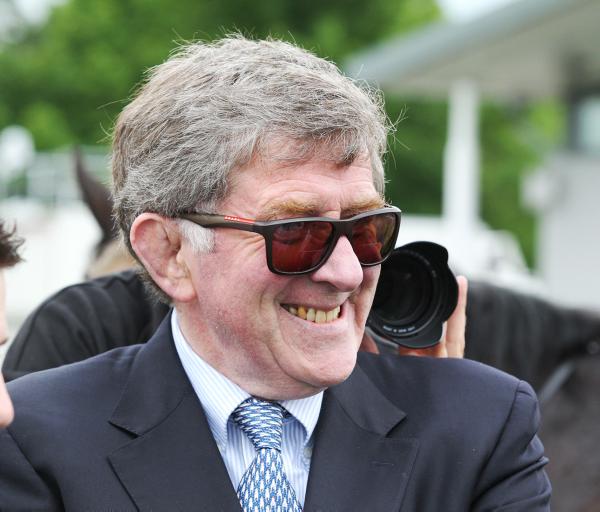 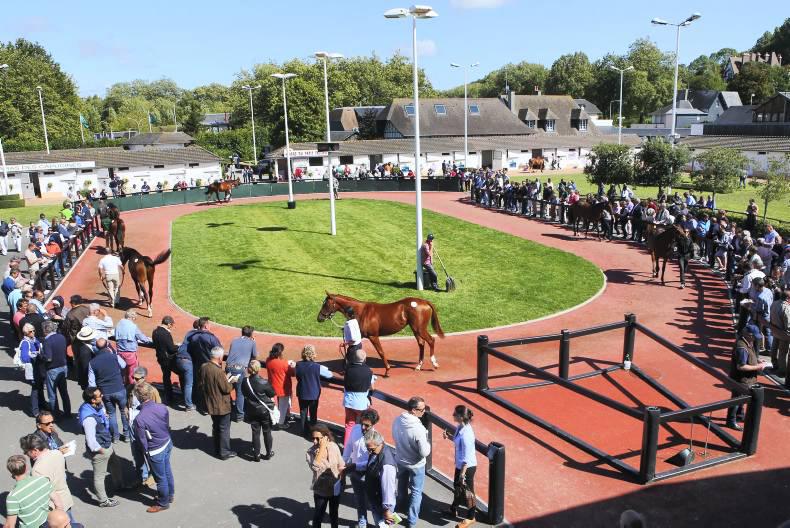