BBA Ireland's Michael Donohoe bought some more high-priced lots at the Tattersalls Autumn Horses In Training Sale on Tuesday but he was the underbidder for the 700,000gns top lot 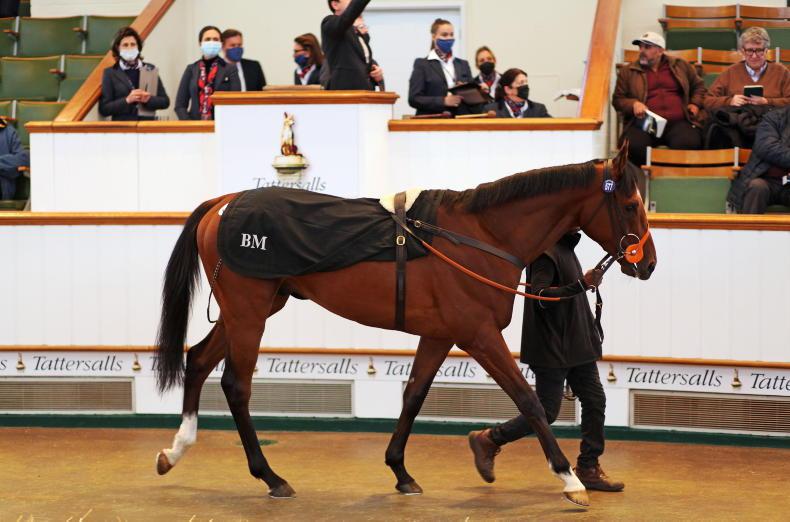 Hannibal Barca finished fourth in the Group 1 Vertem Futurity at Doncaster on Saturday and was sold for 500,000gns today

GROCER Jack became the equal third highest priced horse in training sold at the Tattersalls Autumn Horses in Training Sale when he was knocked down to Saad bin Mishraf and Peter Doyle for 700,000gns on Tuesday evening.

"He is for the Saudi Cup, and with that rating he will definitely be accepted for the race," explained Najd Stud's representative Saad bin Mishraf.

"Hopefully, he will act on the dirt, we hoped we might get him for 400,000gns – it was tough competition and I think it was from people with the same target!

"The prize-money fund at the Saudi Cup is driving up the market for the right horses. And it is not just the Saudi Cup, there are other valuable races on that card, too – Saudi is becoming very important on the international racing scene."

A realistic Mishraf added: "No matter what you spend, sometimes it works, sometimes it won't work. You can spend three million on a yearling and it won't break its maiden, and that is the same everywhere."

The four-year-old son of Oasis Dream was owned and bred by Dr Christoph Berglar and trained by Waldemar Hickst and was a winner of the Group 3 Preis der Deutschen Einheit on his most recent start, having been second in the Group 1 Grosser Dallmayr-Preis on his previous start.

"That was, by a long margin, more than I expected! I thought he might make between 300,000gns and 500,000gns," reasoned consignor Ronald Rauscher. "But obviously we had a situation of two people going logger heads, and that makes a big difference."

Out of the Doyen mare Good Donna, Grocer Jack was consigned with a Timeform rating of 117 and also caught the attention of underbidder Michael Donohoe of BBA Ireland and local agent Armando Duarte.

Rauscher said: "Grocer Jack has not put a foot wrong for us, and I hope that continues for his new connections. He is a very fluent mover, and I think he prefers fast ground."

Hannibal Barca was rated as a classic contender after selling for 500,000gns earlier in the session.

The two-year-old entered the ring off the back of a fine fourth in the Group 1 Vertem Futurity Trophy last Saturday, having won one of two previous novice starts for trainer Brian Meehan.

The son of Zoffany was bought by BBA Ireland’s Michael Donohoe for an undisclosed client – and while plans are fluid at present, the agent believes the colt has huge potential.

“He has been bought for an existing client who has a couple of horses in England, Ireland and France, and he may stay in training here. We are not sure what the plans are with him – the first thing was to get him bought, and we will make the plan after.

“He could obviously be a horse for the classics next year, he could have the speed for a mile, but I think in time he could stay a mile and a half.

Hannibal Barca carried the colours of Sam Sangster in his three runs this year – and having bought the colt for £55,000 last September, he was thrilled with the sale.

He said: “I am still buzzing – it was emotional really. Brian and I buy a lot of horses together on spec, and we put them in the shop window – he was one of them. We loved him as a yearling but, with the year of Covid, we struggled to get people to the yard, and he was one of the horses we did not get sold.

“We have a lot of confidence in the horses we buy, so we raced him. Full credit to Brian, who believed in the horse to take him to the Doncaster race. Brian targeted the race for him.

“He has such a bright future. We are obviously gutted to see him go, but it was good business all round.”

Donohoe is by far the leading purchaser over the first two days of the sale. On Monday he bought the top two lots Horoscope (325,000gns) and I Am Magic (200,000gns) for Middle Eastern clients and on Tuesday he also spent 230,000gns on Wink Of An Eye, previously trained by William Haggas for Queen Elizabeth.

Horses from the Shadwell Estate draft also proved popular – with Leicester winner Ikhtiraaq changing hands for 220,000gns, while Elsals was sold for 140,000gns.

Gordon Elliott is set to train Amir Kabir, a four-year-old gelding who recently won a 14-furlong handicap for trainer Roger Charlton off a mark of 82.

Ado McGuinness looks likely to take charge of Favorite Moon, a classy staying handicapper for William Haggas, who was bought by Shamrock Thoroughbreds for 90,000gns.

The sale continues in Newmarket on Wednesday and finishes on Thursday.