A son of Farhh was sold to Peter & Ross Doyle Bloodstock for 110,000 guineas. He was the 72nd six-figure foal of the four-day sale 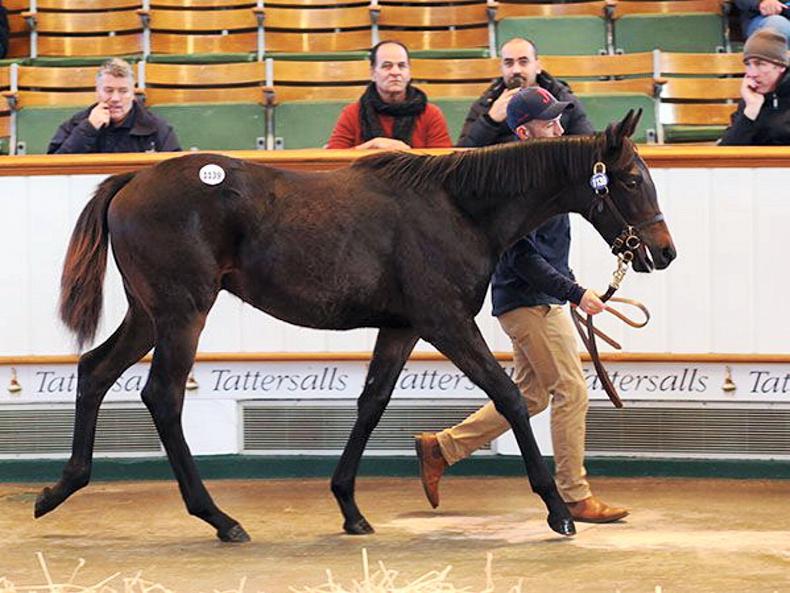 Lot 1139, a Farhh colt out of Duchess Of Fife, topped the final day of the Tattersalls December Foal Sale when sold for 110,000 guineas \ Tattersalls

THE top lot on the final day of the Tattersalls December Foal Sale was the Farhh colt out of the Dutch Art mare Duchess of Fife who continued the fabulous week enjoyed by breeder Colin and Melba Bryce's Laundry Cottage Stud and consignor Jamie Railton.

The team topped the second day of the sale with their Bated Breath colt at 185,000 guineas and Saturday's colt realised 110,000 guineas to the bid of Ross Doyle after he saw off Tally-Ho Stud’s Tony and Roger O’Callaghan.

"It is great, we are very lucky," said Bryce with a smile. "We bred the mare Duchess Of Fife and this was always a fabulous foal, a great walker. It was Melba who decided on Farhh – she loved him when she saw him at Darley.

Duchess Of Fife is in foal to Unfortunately and is due to be sold at the December Mares Sale next week, catalogued as Lot 1983.

Ballyhane Stud’s Joe Foley went to 95,000 guineas to secure the Nathaniel colt out of the Cadeaux Genereux mare Robema from Flintshire Stud after seeing off Yeomanstown Stud’s Gay O’Callaghan. The March-born foal is a half-brother to the listed winner Connect and the stakes-placed Atlantic Sun.

Dave Weston of the Marlborough-based Flintshire Stud said: "This is a lovely foal and has always been very straightforward. The very first mare we bought was from Joe Foley and Joe was underbidder when we bought Robema.

"We started Flintshire 15 years ago – it was a derelict dairy farm. We have trained National Hunt horses from there under a permit but have recently got a flat licence too.

"We want to train our own and then, once we get going, a few for syndicates, but we don't want to train for lots of outside owners.

"We have four mares and are looking to upgrade them now so we can produce Book 1 and Book 2-type yearlings. We hope to buy next week."

Purchaser Joe Foley said: "This is a special-looking foal, and the mare has shown that she can do it. Nathaniel has proved that when he gets a good one, it can be a very good one indeed!"

The first foals of the dual Group 1 winner Ulysses have been very well received at the December Foal Sale and the colt from West Moor Stud caught the attention of Ballyphilip Stud’s Paul McCartan.

Out of the Exceed And Excel mare Azhar and from the family of the Breeders’ Cup Mile winner Domedriver and this year's Prix Marcel Boussac heroine Albigna, the colt was knocked down to McCartan for 90,000 guineas.

"He is a gorgeous individual, and from a good cross, that of Galileo over Exceed And Excel," said McCartan.

"He is out of a mare rated 89, who won at two, and he looks as though he will have some pace. It is also the family of the autumn's Group 1 winner Albigna."

At the end of the day, Tattersalls Chairman Edmond Mahony commented: “A sale average of almost 45,000 guineas, second only to last year’s wide margin record, combined with an improved clearance rate and turnover well in excess of any other European foal sale, are all positive indicators, yet again reinforcing the status of the Tattersalls December Foal Sale as the premier fixture of its kind in Europe.

“Demand for quality British, Irish, French and German foals has been unrelenting, and while we should continue to recognise the selective nature of the current market, we have had more than 70 foals selling for 100,000 guineas or more this week, as well as an impressive 14 foals breaking the 300,000 guineas mark and international buyers making a significant impact at all levels of the market.

"Following on from their prolific buying at Books 1 and 2 of our October Yearling Sales, it was particularly encouraging to see American buyers continuing to make their presence felt alongside buyers from throughout Europe, the Gulf region and Japan, all of whom have also made a major contribution to this week’s sale.

“While the Tattersalls December Foal Sale has enjoyed a spectacular year of racecourse achievement in the shape of classic and Group 1 winners Blue Point, Magna Grecia, Phoenix Of Spain and Star Catcher, it is, of course primarily the domain of the pinhookers who as ever have worked tirelessly throughout the sale.

"Their commitment to the Tattersalls December Foal Sale is driven by consistent success and we very much look forward to seeing their expertise and judgement being handsomely rewarded at next year’s Tattersalls October Yearling Sale where so many of their purchases will reappear.

“In the meantime, we look forward to welcoming buyers from all over the world to the Tattersalls December Mares Sale which begins on Monday and is the annual showcase for the very best breeding stock to be found in Europe."

The Tattersalls December Mares Sale starts at 9.30am on Monday, December 2nd.