Buyers from the Middle East and Australia really showed their strength at Tattersalls on Wednesday, but Gordon Elliott also managed to secure one of the top lots 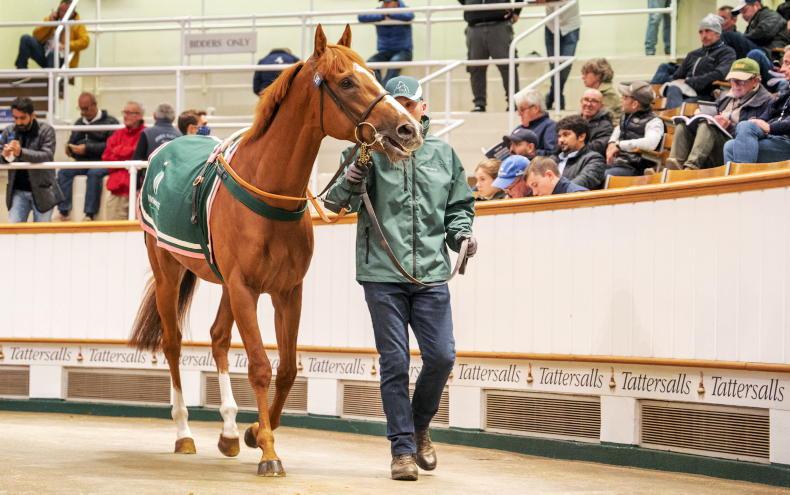 Boltaway has won four handicaps this season in Britain

THE lure of the Saudi Cup races in February continued to have a profound impact on the Tattersalls Autumn Horses in Training Sale on Wednesday when a member of the Saudi royal family paid 400,000gns for the three-year-old colt Boltaway.

Ironically, Boltaway was being sold by Juddmonte, the global racing and breeding operation headed by the late Prince Khalid Abdullah of Saudi Arabia. Trained by Roger Charlton, the Dubawi colt won four handicaps this season and has a BHA rating of 93.

His representative Saad bin Mishraf said: "We tried to buy this horse privately, but that wasn't possible and so we waited for this sale. It's proved to be one of the toughest markets I have ever seen for horses in training.

"He's by Dubawi, whose offspring have succeeded in Saudi Arabia and out of a Dansili mare, and Dansilis have done well well in Saudi Arabia, so he had the right pedigree. He also had size and good feet for racing on dirt.

"He's not been over-raced and he vetted 100%, which was one of the main reasons for trying to buy him.

"All the races in Saudi Arabia are on the up, with better prize money, sometimes increased by four or five times. There are races for locally-bred horses and imported horses, and while we don't have many imported horses the ones we have are very good."

Old Flame, another of the Juddmonte Farms draft, was bought by the Sydney-based Snowden Racing/Will Johnson Bloodstock for 250,000gns.

Formerly trained by Ralph Beckett, the three-year-old colt has run four times, winning twice over seven furlongs and is rated 87.

Speaking from Australiam Colum McCullagh, Snowden Racing's racing and bloodstock manager, said: "He will be on the first shipment from Europe to Australia. He looks to have the right sort of profile for Australia and is by Invincible Spirit, who has such a huge influence here through his son I Am Invincible.

"He should suit a lot of races here over distances from six furlongs to a mile, he is a real-sprinter miler type – the prize-money here in Australia for this type of horse is so good. He has not been bought for a particular client and we will look to syndicate him."

Also heading to Australia is Youth Spirit, a high-class staying three-year-old for trainer Andrew Balding this season. With a rating of 110, he might have been expected to fetch more than his price of 230,000gns.

"I am extremely excited about that... I have been trying to buy the horse all year. There has been a lot of activity from Australia to buy this horse privately, for various reasons the sale did not quite happen.

"His level of form is outstanding, he is by Camelot, he is such a beautiful looking horse, he has absolutely everything going for him. I am surprised and delighted, thrilled, I am very satisfied - that is my buy of the year."

McKeever was buying for regular client Gai Waterhouse and Adrian Bott, a second horse purchased for the Australian-based training team.

Despite all the Saudi and Australian money in circulation, Gordon Elliott managed to get his hands on one of the high-priced lots. He will train Pied Piper, the dual-winning three-year-old colt by New Approach, was was sold out of the Gosden yard for 225,000gns.

Buyer Joey Logan said: "Pied Piper has been bought by Andrew and Gemma Brown, who have a string of horses with Gordon. The horse will go juvenile hurdling this winter, and will run back on the flat next summer – and will be a dual purpose type.

"I saw some videos of him, but Gordon saw him at Tattersalls and really loved him. Pied Piper won well last time on softer ground and looks to have a good profile to go hurdling."

The final day of the sale is on Thursday but already the total turnover for the first three days - over 10 million guineas - is greater than the entire sale has recorded in the past.