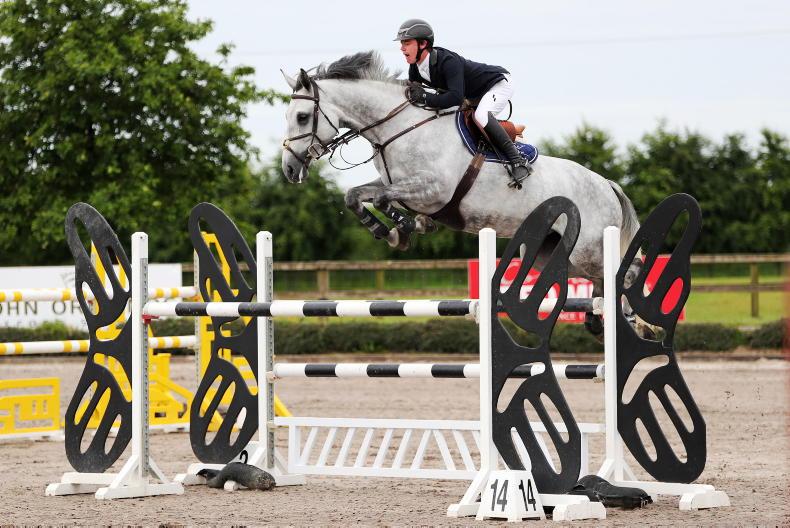 HHS CORNETTA and Mikey Pender made their mark in the seven and eight-year-old qualifier for the RDS in Mullingar on Wednesday, winning the competitive class by a margin of over a second.

At just seven years old this Marion Hughes-owned and bred mare, who is by Cornet Obolensky out of HHS Acorado (Acorado) has been cruising through every challenge she has been set this year; finishing as runner-up in the HSI Studbook Series in The Meadows in April, as well as in Barnadown in May.

Some 81 combinations lined out for the 1.40m class which offered nine places for the Ballsbridge show case.

Of the 81 only 33 managed to produce a clear first round. Course designer Tom Holden had set them a testing track which included a triple combination at fence six to an oxer four strides later, all of which was on a direct line to the in gate and followed by a change of rein back to a double.

Of the 33, just 11 left all the fences intact and, early to go against the clock, Pender proved fastest of these in a time of 40.21 to secure the win.

Another seven-year-old, William McDonnell’s PLS Somers Knight (OBOS Quality 004 x Harlequin Du Carel), ridden by Brendan Murphy, came closest to catching him in 41.87 and had to settle for the runner-up spot. Mullingar has been a happy hunting ground for this pair; they won the HSI seven-year-old series qualifier here at the international show at the start of June.

Dermott Lennon took third place in 42.10 with Bronte Stable’s All Pleasure Hero II, an eight-year-old mare by Aganix Du Seigneur who, out of Calgot Pleasure (For Pleasure), is a granddaughter of Lennon’s former world champion mare Liscalgot. She was bred by HPBNL Horse Invest Ltd.