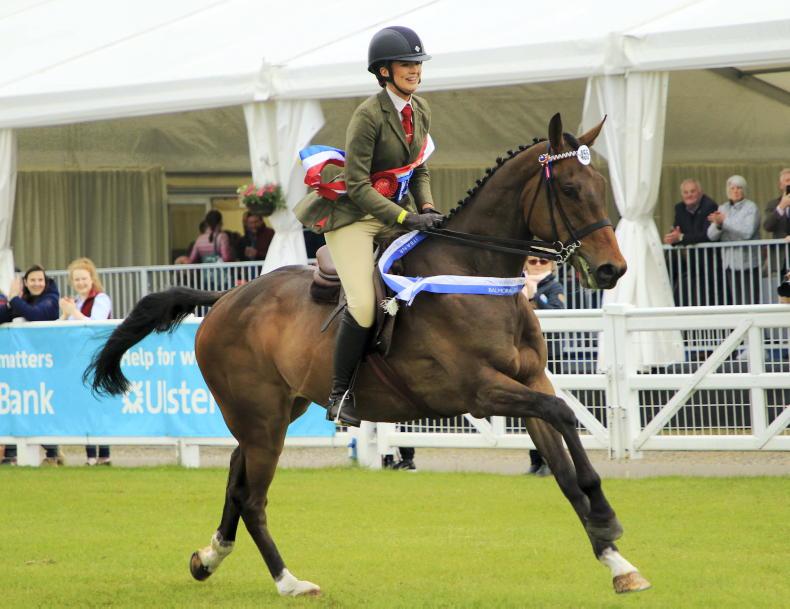 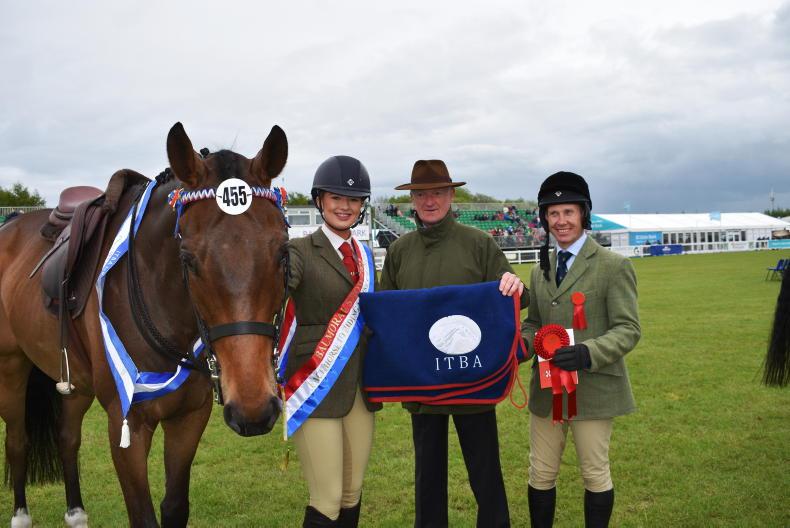 WITH introductions which left no one in any doubt as to their credentials, Willie Mullins (conformation) and Richard Johnson (ride) were the focus of attention in the Main Arena at Balmoral Show last Thursday week as they judged the Irish Thoroughbred Breeders Association racehorse to riding horse championship.

Unlike the regular showing classes at Balmoral Park, the horses were not put into an initial order following the ‘go-around’ but riders were just asked to form a line as they came into the centre of the arena.

The judges then rode them and inspected them in-hand, working along from the entrance end of the line-up.

Had there been betting on the outcome among those ringside, chances are that last year’s winner of the class, the Jamie Buckley-ridden Woodland Opera, would have been a short-priced favourite to complete the double.

As it transpired, the youngest of the 19 entries, Joyce McConnell’s five-year-old Mahler gelding Easy Pleased, partnered by the youngest rider, the owner’s daughter Felicity (16), topped the judges’ placings with Woodland Opera standing reserve.

The winner, who is out of the hurdle-winning Presenting mare Hard To Please, was bred in Co Kerry by Brendan Nolan.

Through Peter Nolan Bloodstock, he was sold as a foal for €8,000 at the 2017 Tattersalls Ireland November sale to Matt O’Connor Bloodstock who, trading as Graigue Farm, re- sold him at the 2020 May Sale for €19,000.

There he was purchased by leading Co Antrim point-to-point handler, Warren Ewing, for whom he ran just the once, unseating his rider five out in a four-year-old geldings’ maiden at Tattersalls last November.

“We quickly realised that he was never going to be a racehorse, but he’s a lovely, well-balanced, athletic individual and we knew he’d find another job,” said Ewing who is currently re-stocking his yard having enjoyed good sales during the year.

Ewing’s head girl, Sarah Sproule, who broke Easy Pleased, contacted the McConnells as she had sold them a successful eventing pony, Finding Nemo, in the past, and, acting on her recommendation, they bought the horse.

“I’m thrilled for them,” said Sproule. “It’s Felicity’s hard work which has got him there so quickly.”

The rider is coached once a week by Lucca Stubington who has retrained a number of ex-racehorses and is due to compete in the Advanced class at Castle Irvine, Necarne today on the John Kidd-bred September Storm gelding Quingenti.

Surprisingly for most, and disappointingly for the winner’s connections, this Balmoral championship was not a qualifier for the Dublin Horse Show so, as Easy Pleased doesn’t have a racing rating, he will have to use the qualifying route if he is to compete at the Ballsbridge showgrounds in August.

The Treo Eile prize for the best turned-out horse was presented by Diana Cooper to Oisín McCann who took sixth on his fiancé Louise McLaughlin’s Poetic Lord.

This 13-year-old British-bred Byron gelding, who won three times on the flat and once over jumps in spells in England and Ireland, is a half-brother to eight winners including the seven-time scorer, Millennium Force (by Bin Ajwaad).

“When we first saw him, he belonged to these flapping people who had him at a local Riding Club show,” said McCann who, with McLaughlin, runs a mixed yard of thoroughbreds, sport horses, cobs and Connemaras near Lifford.

“When we saw how well the horse moved we knew there would be another job for him but, having bought him in January 2020, we had nowhere really to go with him because of Covid.

“We had him here last year when he was also sixth but he was only half the horse then,” continued McCann.

“We have another ex-racehorse, Miller And Cook, who we will probably go eventing with and do working hunters with this year and keep Poetic Lord to the flat for the moment.

“As he is rated 120, he may or may not get into Dublin off that but we are going to do a couple of the qualifiers as well just in case and hope we get through.”

Louise, who runs the Irish Pony Society North Western Area show at Castle Irvine, Necarne was, according to Oisín, the one responsible for Poetic Lord’s prize winning turn-out last Thursday. “I can just about manage to dress myself, Louise does the rest!” he concluded.

This full-brother to the 16-time winner Balthazar King changed hands for £90,000 following his second-place finish in a Dawstown maiden in May 2016 but failed to win on the track before his racing career ended in September 2017.