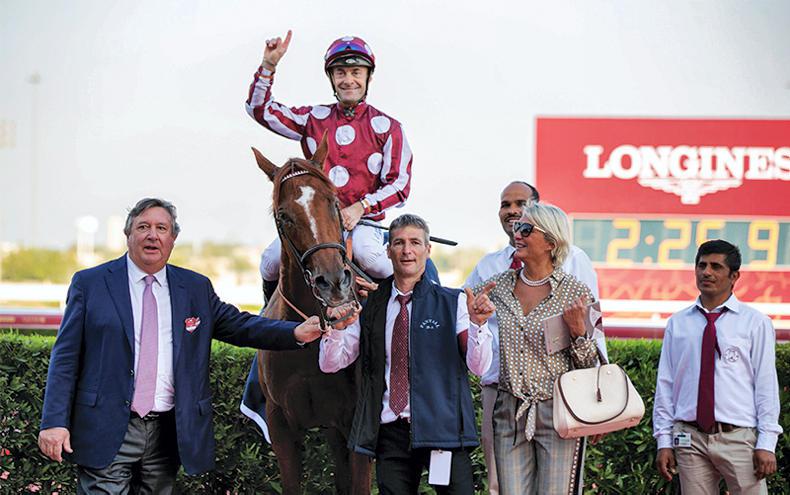 FRENCH King retained his Qatar crown last Saturday when running out an easy winner of the Amir’s Trophy for French trainer and jockey Henri-Alex Pantall and Olivier Peslier.

Only ninth in the Prix de l’Arc de Triomphe last year, French King (by the Turtle Bowl horse French Fifteen) made short work of his 12 opponents in the 12-furlong domestic Group 1 contest on turf. The five-year-old entire is locally owned by Sheikh Abdulla Bin Khalifa, whose maroon silks were also carried by French Fifteen when he finished second to Camelot in the 2000 Guineas at Newmarket in 2012.

There was one Irish runner on Saturday’s valuable card at Al Rayyan racecourse is Doha. The Denis Hogan-trained Make A Challenge looked to have a leading chance in the six-furlong Dukhan Sprint but, drawn wide on his seasonal debut, Joe Doyle’s mount raced freely and lost ground on the first bend. He still held every chance a furlong out before weakening into sixth spot.

The race, a domestic Group 3, was won by Dark Pursuit, a four-year-old gelding formerly trained on the Curragh by Michael O’Callaghan.

Bought for €20,000 at the Tattersalls Ireland September Yearling Sale, the British-bred son of Pastoral Pursuits made a winning racecourse debut at Down Royal and finished third in the valuable Foran Equine Irish EBF Final at Naas before being sold to Qatari connections for 60,000gns at the Tattersalls October Horses in Training Sale.

There was an Irish-bred winner on the day in the shape of Sir Arthur Dayne, a three-year-old colt by Sir Prancealot bred at Tally-Ho Stud. Trained locally by Jassim Mohammed Ghazali, Sir Arthur Dayne won the Al Biddah Mile, a domestic Group 2.

The Oisin Murphy-ridden winner was a £38,000 Goffs UK Premier Yearling Sale purchase and was a minor winner for Mick Channon before being moved on to Qatar for 88,000gns at the Tattersalls October Horses in Training Sale.

A day earlier the one-mile US$200,000 Irish Thoroughbred Marketing Cup, a domestic Group 2, was dominated by French-trained horses by Irish stallions. The six-year-old Stunning Spirit (by Invincible Spirit) defeated last year’s winner Marianafoot (by Footstepsinthesand) to give jockey Mickael Barzalona one of three winners on the day.