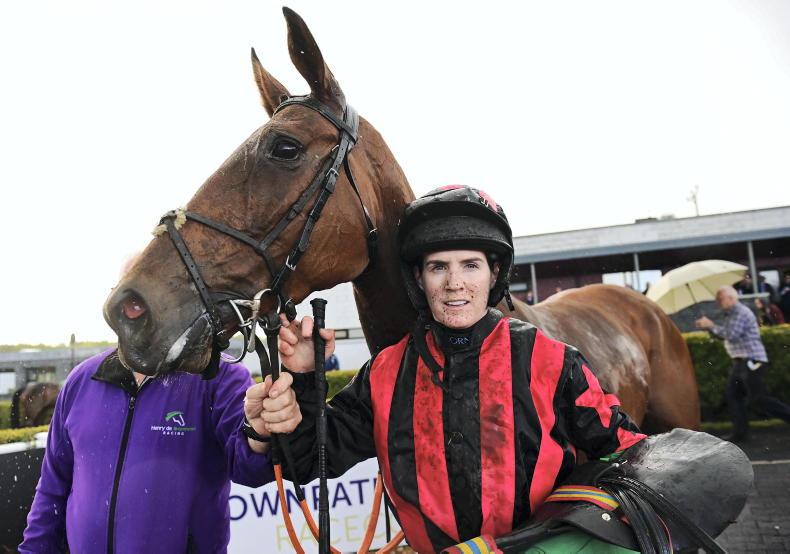 THERE was plenty of chat at the Northern Region event at Castle Irvine, Necarne on Saturday about the previous evening’s race meeting at Downpatrick where the opening two-mile, three-furlong maiden hurdle was won by Queen Jane.

The only runner at the track on Friday for trainer Henry de Bromhead and rider Rachael Blackmore, the Mahler six-year-old Queen Jane is owned by Angus Potterton and was broken for him by his sister-in-law, Sarah Ennis. The Co Meath rider, who partnered two winners and two second-placed horses from her four rides at the Irvinestown estate on Saturday, didn’t mention her role in Queen Jane’s win but her proud husband, Niki Potterton, did so on her behalf.

It was photographer Anne Hughes who brought up the success in Friday’s second race, a 15-runner handicap hurdle over the same trip, of the Stuart Crawford-trained Kingfisher Lane. The six-year-old Court Cave gelding, who was sent off at odds of 33/1 and scored by a neck from the 9/2 favourite Willyouwalkwithme, runs in the colours of his breeder, Regional committee member, and trustee, Elizabeth ‘Hammy’ Hamilton.

The third race on the card, the near two and three-quarter mile Adare Manor Opportunity Handicap Hurdle, saw an eight-length success for the Colin McBratney-trained Journey West. This six-year-old Westerner gelding is owned by amateur show jumper, and veterinary surgeon, Isla Acheson.

Racing at The Curragh was very much in the mind of Joanne Lavery who finished third in the EI110 at Castle Irvine, Necarne on her Irish Sport Horse mare, Shorttale.

While that three-year-old New Bay colt is being aimed at the St James’s Palace Stakes (Group 1) at Royal Ascot next month, Shorttale has the more immediate target of the CCI2*-S at Millstreet this coming week. Sheila also bred Quora who won Saturday’s EI90 under Caroline Lynch. Out of the Don Juan de la Bouverie mare Killossery Donna, the six-year-old chesnut gelding is by Golden Lariat, sire of this year’s BoyleSports Irish Grand National winner, Lord Lariat.

On the point-to-point scene, top show horse producer Rosemary Connors sent out Woodfield Symphony to land the seven-year-old and upwards maiden at Ballingarry on Sunday. Another Mahler mare, the eight-year-old was running for the first time since finishing second in the same race 12 months previously.