Title: PONY TALE: Is that a leprechaun we see? 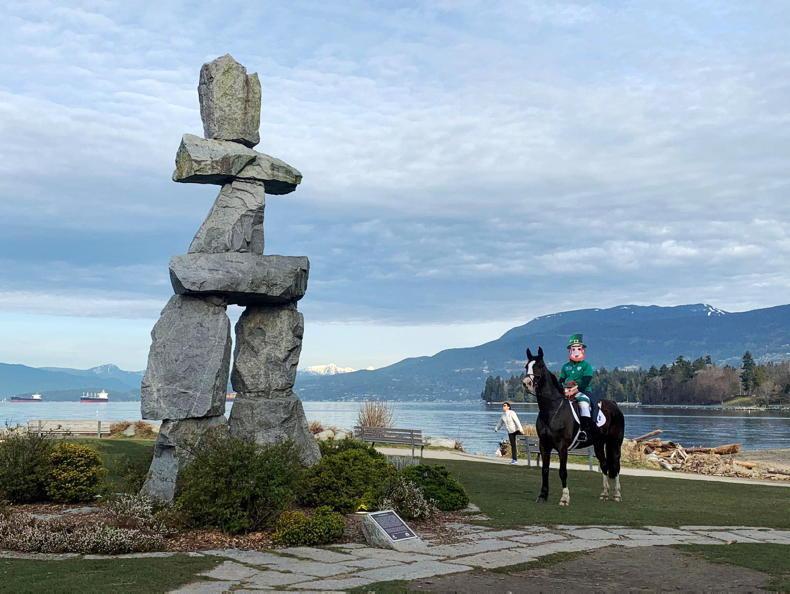 William, who featured in Susan Finnerty’s article last week on interesting facts about the national holiday, moved to Canada with partner Laura in April 2009.

A six-month working holiday turned into a success story for the Craughwell couple and his business interests now include real estate and pubs. Meanwhile, his construction company, IRL Construction, has been recognised as one of the top 10 businesses in Vancouver for its ongoing charitable work and sponsorship.

“Don’t stress about the small stuff and secondly, it’s all small stuff” are his two main rules of business.

A keen hurler, who played at many levels at home in Canada, William is a carpenter by trade with a background in the pub business too. He grew up hunting with the Galway Blazers as a child and was a regular follower until he left for Canada. “I’m living close to Eddie Macken and it was actually through Eddie that I started hunting in Canada. I’m now a master with both the Fraser Valley Hunt in Vancouver and the North Galway Hunt.”

According to William, the Vancouver horse scene is alive and well. “I enjoy going to the Thunderbird Show Park to watch the show jumping. Owner, Jane [Tidball] and her team do a spectacular job there each season and some of the best horses in the world jump at this venue.

“I enjoy catching up with the Irish riders there, especially Conor Swail who always does so well at Thunderbird. Spruce Meadows, later in the summer, is another incredible show.”

What about last year’s ‘public appearance’ with his horse McGregor? “Last year I dressed up as a leprechaun and rode through downtown Vancouver on Paddy’s Day for a bit of fun. The reception I got was phenomenal. I wasn’t sure if I’d be arrested or applauded but thankfully it was the latter… People cheered and clapped and were just so happy to see someone doing something fun amidst the doom and gloom we were all experiencing with the lockdowns across the world at that time.

“Many are wondering will this leprechaun appear again this year…”