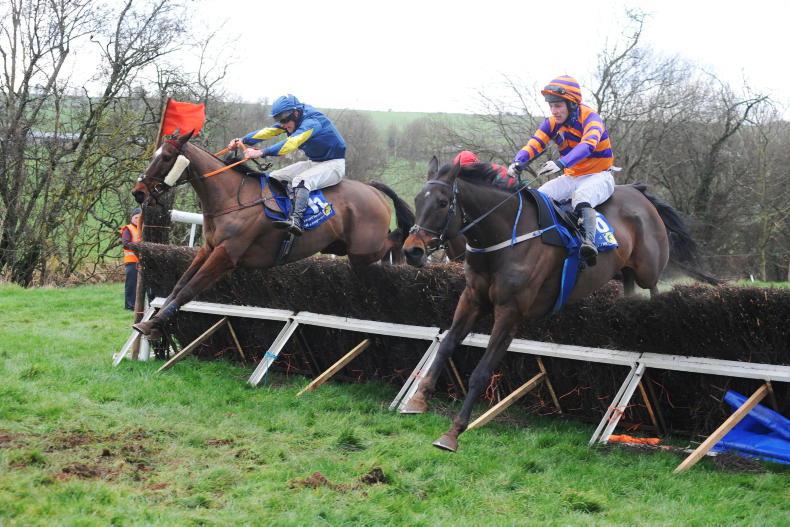 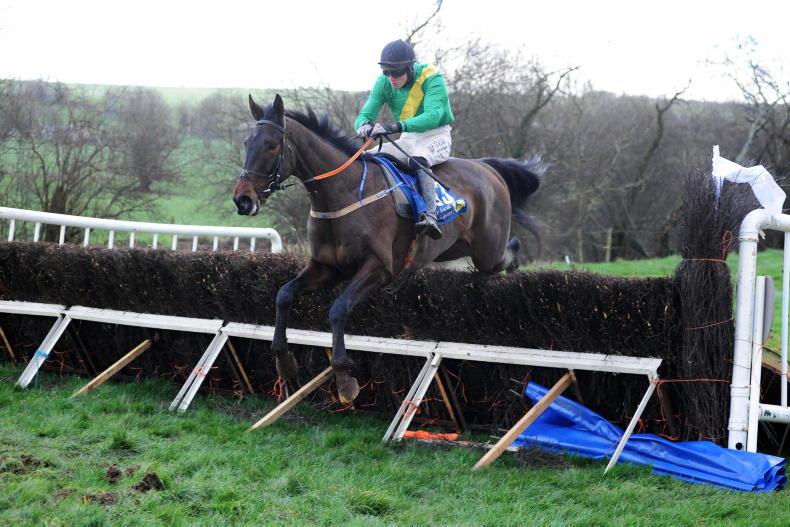 JAMES Hannon is enjoying a terrific run at present and the evergreen rider attained a most praiseworthy feat at his local Tallow meeting last Sunday by partnering the first three-timer of his career at the West Waterford Foxhounds-sanctioned fixture.

Hannon will have attained immense satisfaction from his success aboard James Motherway’s former Midlands Grand National winner Na Trachtalai Abu in the open as he finished second aboard the gelding on his only previous points start in a Dromahane four-year-old maiden in March 2014.

Lord Schnitzel set out with the intention of making all and Na Trachtalai Abu (2/1 - 5/2) was the market-leader’s closest pursuer from before half-way.

The front-runner didn’t exactly aid his cause by blundering two out with the eventual winner, representing Brian Acheson of Robcour fame, moving past on the outer before the final fence.

While Lord Schnitzel then rallied, the 12-year-old winner was much the stronger from the last as he asserted to beat Declan Queally’s charge by one and a half lengths.

“Brian [Acheson] was anxious to come back pointing with him and we’ll go for another open with him now,” said Motherway of the five-time track scorer that amassed in excess of some €170,000 in prize money earnings during his career on the racetrack.

Hannon got his afternoon off to the best possible start by combining with local Fermoy native David Murphy, who now trains a 10-strong string on the outskirts of Thurles, to win the four-year-old maiden aboard Matata.

The hooded Matata (2/1 - 7/4 favourite) was bounced out at the head of affairs and, while a shade keen early doors, he got into a nice rhythm in front and he led until overtaken by runner-up Bannow Bay Boy at the penultimate of the 15 obstacles.

Matata though is nothing but tough with the son of Vadamos coming back with a renewed effort to lead before the last and he asserted on the flat to oblige by two lengths from Bannow Bay Boy, the duo being the only finishers.

“He’s a horse that was broken in early and we were expecting a performance like that,” said handler Murphy of his landlord Donal Commins’ Matata.

Hannon also made his initial mount for handler Mick Goff a victorious one by guiding Well Dick to a gallant front-running success in the five-year-old geldings’ maiden. This race attracted the biggest field of the afternoon in a total of 14 runners.

The giant Well Dick (6/4 - 5/2), having unseated six out on his debut in Aghabullogue last month, was always positioned on the pace and he was joined by Wild Grouse with four fences remaining.

The latter couldn’t raise his effort from two out as a more potent threat some emerged in the form of the patiently ridden Flash Conroy.

There was little to separate the pair at the last, but Well Dick was in no mood to be denied on the flat as he asserted to eclipse Flash Conroy by a length in what was the closest finish of the afternoon.

The pair returned fully 20 lengths clear of the third-placed Thomas Mor, runner-up on his debut at Borris House in mid-December.

Well Dick, an early-May foal, owned by his handler’s wife Catriona, is out of an own-sister to a blacktype-placed chaser in It’s Crucial,.

The €15,000 Goffs foal purchase is now likely to be offered for sale.

BRIAN Dunleavy is another that’s experiencing a stellar campaign and the Dungourney native posted his second career double, the teenager signing off former hurdler Plan B in the five-year-old and upwards adjacent hunts maiden.

The Micheal Griffin-trained Plan B (7/4 - 6/4 favourite), who finished third in a Roscommon maiden hurdle last summer when under the care of Gearoid O’Loughlin, made his way to the front at the fifth last and he coasted clear from two out to dismiss landowner Jimmy Mangan’s Breeze Of Wind by eight lengths.

Griffin indicated that his wife Kay’s Plan B, whom he purchased at Goffs’ horses-in-training sale last October, could revert to hurdling duty over the summer months.

Dunleavy, who was cheered on by his parents and brother DJ, was witnessed to terrific effect when steering Alan Ahern’s newcomer She’s A Saint to success in the five- and six-year-old mares’ maiden.

She’s A Saint (4/1 - 3/1) was sent to the front on the inner two out and, throwing a fabulous leap at this second-last fence, she was always in command thereafter.

The Clondun Partnership-owned bay duly maintained the tempo to account for Benny Crowley’s Ami Des Flots by two lengths. She’s A Saint, a half-sister to a Grade 2-placed hurdler in Equus Amadeus, is now likely to be sold.

THE Robert Clancy-trained Hitthekettle stepped forwards from his fourth-placed effort at Carrigarostig last month by landing the six-year-old and upwards geldings’ maiden in the hands of Adam Feeney, who celebrated his initial track success aboard Black Bamboo in a Limerick bumper the previous week.

However, Hitthekettle (6/1 - 8/1) had his task greatly simplified when newcomer Max’s Champ fell two out when seemingly travelling best at the time with an eight-length advantage.

Hitthekettle was then left with an unassailable lead and, although slow at the last, the winning six-year-old still defeated Glenavaddra by 40 lengths in the colours of Tony Considine.

The 21-year-old Clancy, who hails from Six-Mile-Bridge, was celebrating his second success as a handler and he would have partnered Hitthekettle but for sustaining a fall from Useitorlooseit at Ballvodock the previous Sunday.

Flash Conroy (M. E. Doyle): This newcomer by Walk In The Park came from well off the pace to finish second to Well Dick in the five-year-old geldings’ maiden.

A €25,000 yearling purchase, he seems to possess an abundance of pace and appeals as a ready-made track winner over shorter to middle distances.