Just one final step...
You must confirm your email address by clicking on the link we’ve sent to your email address.
You are only one short step away from reading 5 free Field+ articles.
Pinatubo team brimming with confidence

Pinatubo team brimming with confidence
By Irish Field Contributor on 29 May 2020
The 2000 Guineas favourite is said to be pleasing connections, 10 days ahead of the classic

The Shamardal colt was unbeaten in six outings last year, culminating in Group 1 victories in both the National Stakes at the Curragh and the Dewhurst at Newmarket.

Pinatubo was awarded a mark of 128 following his impressive juvenile campaign – making him the highest-rated two-year-old since Celtic Swing in 1994 and putting him ahead of Frankel.

Appleby thinks Pinatubo’s mindset is what sets him apart ahead of his planned reappearance in next week’s Newmarket Classic.

He said: “I think his asset is he’s the ultimate professional. He’s like any sportsman at the top end – you generally don’t see them fretting coming into a championship competition, whether it be boxing or golf.

“Those cool, calm customers are the ones that will often turn up with their A game and channel their positivity into the match, the swing of the club or the punch of a glove, stuff like that.

“Those are his attributes – he just turns off, he’s a got a great mind on him. He knows when those gates open, it’s game on.”

Pinatubo is a general 10/11 favourite for the Guineas and has dominated the ante-post market throughout the winter months.

The Aidan O’Brien-trained Arizona is his closest market rival as a 7/1 shot, but given that runner finished two lengths behind Pinatubo in the Dewhurst, Appleby’s main worry would be the draw on the Rowley Mile.

He said: “The draw would be one thing (that concerns me) – at Newmarket they’re probably going to come from left to right with the stands rail being the higher numbers – so we would like a draw to help William (Buick, jockey) get into a position where he’s comfortable on him.

“Without wanting to sound too confident, he’s pleasing us, he’s the highest-rated two-year-old we’ve seen in the last 25 years, he looks great, he’s won on all ground conditions and more importantly he’s won on that track so fortunately he ticks a lot of boxes going into the race.

“Let’s just hope we can see the Pinatubo we saw as a two-year-old.”

Pinatubo is also well fancied in the betting for the Derby, which is scheduled to be run at Epsom on July 4th.

While Appleby thinks Pinatubo’s temperament would help his chances of staying 12 furlongs, his sights are purely focused on the Guineas at present.

He said: “His mindset gives him every chance of being able to step up in trip – what trip we will find ourselves at is the question I’d love to be able to answer.

“The Guineas is our priority and watching him as an individual, you’d say there’s a chance of him getting to a mile and a half as he’s got the right mindset to be able to do it. He switches off so well.

“If or when we cross that bridge of potentially stepping up in trip, he has the mindset to give himself every opportunity.”

Big-race rider William Buick is also looking forward to Pinatubo’s Newmarket return, having been delighted by a racecourse gallop at Chelmsford last week.

He said: “I’ve been very pleased with him, so from my perspective everyone is very happy with him and I’m no different. He’s done what’s required and he’s in good shape and pleasing everyone.”

Appleby could also have a second string to his bow in Al Suhail.

The Dubawi colt won one of his four starts last term and was last seen when being beaten half a length by fellow Godolphin runner Military March in the Autumn Stakes.

Appleby added: “The plan is for Al Suhail to participate in the Guineas, hopefully. We’ve got 10 days to go, we’ll gallop him again this weekend and then we will chat amongst ourselves and make a final decision going into Monday.” 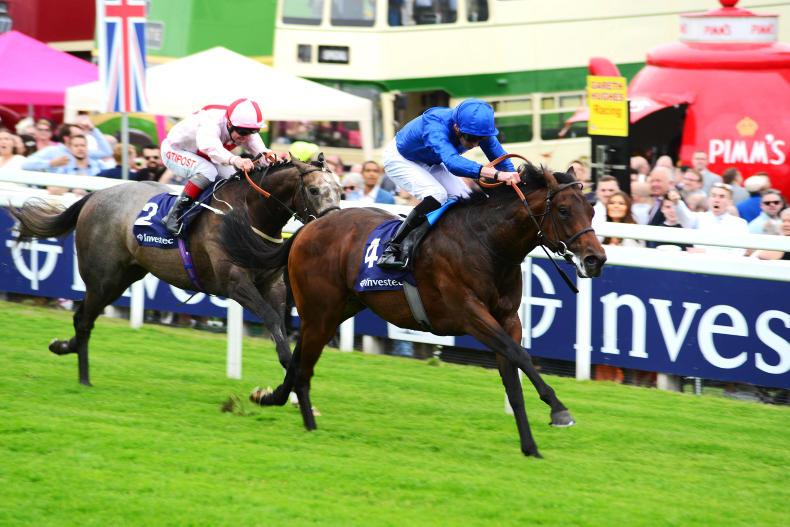