Just one final step...
You must confirm your email address by clicking on the link we’ve sent to your email address.
You are only one short step away from reading 5 free Field+ articles.
Nuts Well springs Old Roan surprise at Aintree

The nine-year-old, whose top-weight of 11st 10lb was reduced by the 3lb claim of jockey Danny McMenamin, outstayed Clondaw Castle to claim the £36,000 first prize.

Imperial Presence made most of the running with Midnight Shadow and Crievehill to the fore with the latter going on four out.

He was soon challenged by Oldgrangewood and Clondaw Castle, who put in their bids with Itchy Feet and Nuts Well.

There was little between the quartet at the last, but Nuts Well (18/1) and Clondaw Castle knuckled down to fight it the finish.

It was only in the closing strides Nuts Well got on top, to win by a length and a half. Itchy Feet was a length back in third, with four and a half lengths back to Oldgrangewood in fourth.

There was early drama in the two-and-a-half-mile feature when Robbie Power was unseated from the well-fancied Vision Des Flos at the second fence.

The obstacle was bypassed on the second circuit as the Gold Cup-winning rider received treatment, but while stood down for the rest of the day he was able to walk back into the weighing room, having reportedly escaped serious injury.

Elsewhere on the card, Minellacelebration continued his love affair with the Merseyside venue as he recorded a third course and distance success in the Every Race Live On Racing TV Veterans’ Handicap Chase.

The 11-year-old, trained by Katy Price, quickly put the race to bed after leading at the second-last fence in the hands of Ben Poste.

The rest of the field were playing for places as the 15/2 chance ran out an emphatic winner of leg three of the veterans’ chase series over three miles and a furlong.

Minellacelebration scored by 14 lengths with Pobbles Bay staying on to claim second spot by a neck from Sametegal. 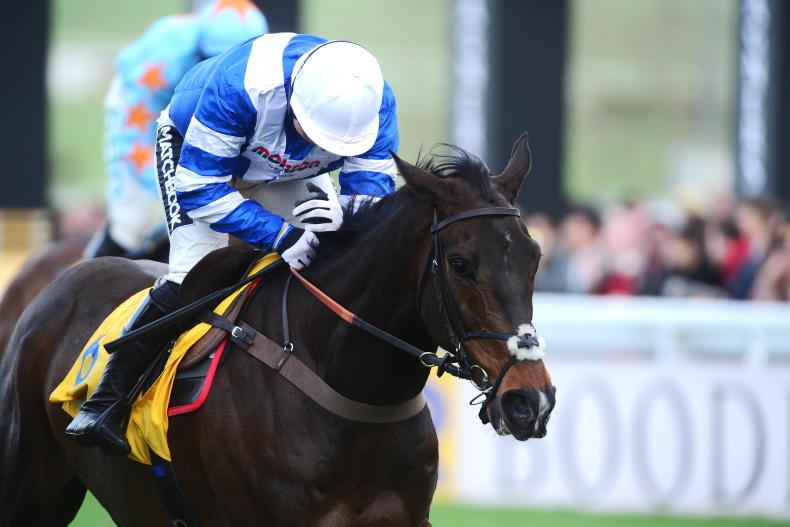 Inside Racing
SIMON ROWLANDS: Frodon needs to rise further
By Simon Rowlands on 27 October 2020
More in Latest News
News FREE
SALES: Aunty Bridy heads opening day of December Mare Sale
News FREE
Walk In The Mill on course to bid for Becher hat-trick
News FREE
Skelton all set for Tingle Creek on Politologue
Classifieds
Place ad
Get full unlimited access to our content and archive.
Subscribe to The Irish Field
Unlimited access to The Irish Field via your computer, mobile device, tablet or newspaper delivered to your door.
Subscribe now +
Already a subscriber? Sign in