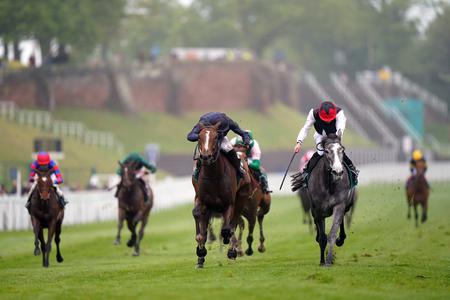 Thoughts Of June dominated from the front to provide trainer Aidan O’Brien with a seventh victory in the Weatherbys Bloodstock Pro Cheshire Oaks.

Without a win in three previous outings, the daughter of Galileo was last seen finishing second to the reopposing Above The Curve in a Leopardstown maiden four weeks ago.

Above The Curve, trained by Joseph O’Brien, was the 5/4 favourite to cement her status as a leading contender for the Cazoo Oaks at Epsom, while Thoughts Of June was a 7/1 shot under Ryan Moore.

Seemingly keen to ensure the mile-and-a-half contest was a stern test of stamina, Moore bustled his mount away from the starting stalls to get to the lead and she remained there throughout.

Having been ridden with more restraint by Shane Crosse, Above The Curve moved stylishly into Thoughts Of June’s slipstream rounding the home turn and looked sure to pick her up in the short straight.

But the market leader hung slightly when coming under pressure and did not pick up as expected in the rain-softened ground, allowing the Ballydoyle runner to see her off by a neck.

Both the winner and the runner-up are part-owned by the Coolmore triumvirate of John Magnier, Michael Tabor and Derrick Smith.

Coolmore’s UK representative, Kevin Buckley, said of Thoughts Of June: “I think we have to be thinking of Epsom. Aidan will have a chat with the owners, which include our partners Moyglare Stud, but I think on that performance we’d have to head to Epsom.

“Aidan always felt that stepping her up in trip would be to her liking, he thought she’d handle it here round the bends and Ryan was very happy.

“We made plenty of use of her last time at Leopardstown, so that was always the plan to do that today but she’s fairly versatile I would imagine.

“We’ll have to see what else happens in the trials. We were very happy with Tuesday in the Guineas and she seems to have come out of it well. We’re looking forward to June.”