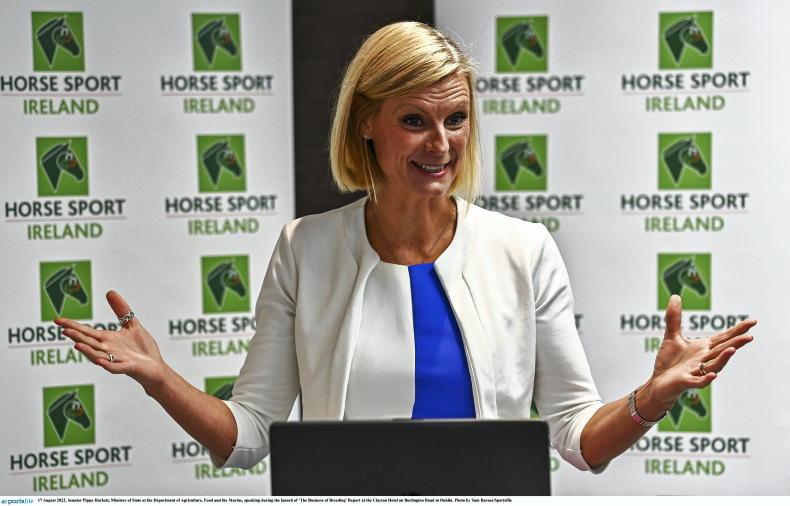 Senator Pippa Hackett (Greens), Minister of State at the Department of Agriculture, Food and the Marine, speaking during the launch of ‘The Business of Breeding’ Report at the Clayton Hotel on Burlington Road in Dublin \ Sam Barnes Sportsfile

The report was based on investment sentiment analysis and surveys carried out during June 2022 of sport horse breeders nationwide. The survey was shared with breeders registered in the Irish Horse Register, sport horse breeding groups, breed societies and other Department of Agriculture, Food, and the Marine approved studbooks. The research was conducted at a time when the challenges of Brexit, climate change and rising inflation were well known.

Launching ‘The Business of Breeding’ Minister of State at the Department of Agriculture, Food and Marine, Senator Pippa Hackett said: “The Dublin Horse Show is a highlight each year for the Irish equine community and is globally renowned for showcasing Irish performance and rare breeds nationally and internationally.”

Minister Hackett continued saying “Horses play a huge role in supporting rural Ireland - something I am passionate about and this industry supports many family farms across the country. I am working with my colleagues Minister McConalogue and Minister Heydon to have the equine sector included in the next TAMS scheme. This will require approval from Europe in the coming months and today’s study offers valuable insight on how the breeding sector will continue to make a valuable contribution to many farms across Ireland.”

Speaking at the launch of the report, HSI Chief Executive Denis Duggan said: “Irish sport horse breeders intend to invest €342 million over the next three years in on-farm improvements such as manure management, fencing, and stabling.

“This is a significant and large scale of on-farm investment in equine premises across the country. Our research indicates that Horse breeders live, work and will undertake these investments in every county of the country.

“Such level of on-farm investment has the potential to support many other construction and fabrication jobs in other Irish companies. Despite rising construction costs, which were well known when this research was being undertaken, we see a significant appetite for on-farm equine upgrades and improvements many of which will have environmental benefits or lead to improvements in both farm safety and animal welfare standards”

Breeders are the industry bedrock

“There is a desire both nationally and internationally to own an Irish-bred horse. Irish-bred horses are of significant export with 69 per cent of breeders having sold at least one horse outside of the Island of Ireland.

“Future investment in capital infrastructure is essential in any industry and the equine industry is no different. Our sport horse industry is estimated to be worth more than €1bn annually to the Irish economy. Supports for future capital investments on-farm will be welcome. This research provides a framework for such future funding in the successor to TAMS.”

“This type of future investment support will encourage breeders to retain and produce their young stock, in doing so adding value and profit margins to their breeding enterprises. Horse Sport Ireland’s objective for our research, undertaken by IFAC accountants, is to articulate the industry needs to government so that we have improved viability of the breeding industry through investment flexibility, innovation and sustainability.”

This breeder-centred research, and resulting report, was issued directly to active sport horse breeders, breed societies, breeding focus groups and Department of Agriculture, Food, and the Marine studbooks. The survey received 1,076 unique responses from breeders nationwide, making the research nationally representative and accurate to within three per cent.

• 78% say that increasing costs is the greatest challenge facing their equine business with the most significant costs increases seen across feed, fertiliser and fuel.

• 69% have sold a horse outside the Island of Ireland

• 78% have undertaken at least one environmental measure in the past three years such as tree planting or muck-heap management.

• 48% have another farming enterprise with the majority having a beef or sheep enterprise.

• 71% believe that Brexit has affected the transportation of horses

• 56% say an On-Farm Capital Investment programme will encourage them to invest in their enterprises.

This survey was conducted independently by IFAC on behalf of HSI, and was funded by the Department of Agriculture, Food, and the Marine.