Just one final step...
You must confirm your email address by clicking on the link we’ve sent to your email address.
You are only one short step away from reading 5 free Field+ articles.
NEWS: Connections of Aloha Star to appeal Curragh demotion

NEWS: Connections of Aloha Star to appeal Curragh demotion
By Irish Field Contributor on 10 August 2020
“It’s not just the €20,000 difference in prize-money, it’s the difference between finishing second and third in a Group 1,” said trainer Fozzy Stack

CONNECTIONS of Aloha Star have confirmed their intention to appeal the decision of the Curragh stewards which saw her demoted from second to third in the Keeneland Phoenix Stakes on Sunday.

The Fozzy Stack-trained filly was supplemented for the Group 1 contest having won the Airlie Stud Stakes on her previous outing. She also holds an entry in an online Tattersalls sale this week.

The daughter of Starspangledbanner finished second to Lucky Vega, a short head in front of The Lir Jet – but the stewards deemed there was sufficient interference between the runner-up and third-placed horse to see the placings reversed.

“She’s come out of the race well and she holds an entry in the online sale this week,” said Stack.

“If she’s still in the yard after that we’d like to aim at the Cheveley Park. It’s always hard when the girls take on the boys, but she ran a cracker. The winner looks very good, but she beat a lot of smart horses with good form.

“It’s not just the €20,000 difference in prize-money, it’s the difference between finishing second and third in a Group 1.

“We’ve lodged an appeal, so we’ll leave it at that.” 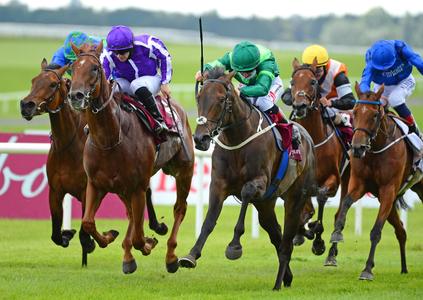