Just one final step...
You must confirm your email address by clicking on the link we’ve sent to your email address.
You are only one short step away from reading 5 free Field+ articles.
NAVAN PREVIEW: Mullins mare looks a Cut above in Flyingbolt

This looks a fairly poor turnout, perhaps not surprising so close to Cheltenham. Gordon Elliott’s Galet D’Oudairies ran with credit on his first start since moving to Cullentra from France and he could tough to beat here, racing in the double green silks of Isaac Souede and Simon Munir.

Annie Pender showed promise on her first two starts for John Queally and presumably found the ground too deep at Gowran Park on her latest run. She can do better now while it’s worth keeping an eye on the market for Joseph O’Brien’s newcomer New Ross.

La Chanteuse ran a big race when fourth to Bidbadandbeautiful in a listed mares’ bumper at this course in November and she may be able to win on her hurdles debut. She won her bumper at Ayr three weeks before that and if she can take to jumping now, this looks decent opportunity.

Flying Risk struggled a little when she was given a chance in a listed mares’ bumper at Huntingdon but she did seem to improve for hurdles when third to Jazzaway at Fairyhouse. With normal improvement, she’ll be bang there again. Robin Des Sivola is another worth mentioning for the in-form Jessica Harrington team. She ran nicely in a couple of races last summer but may just need this run given she’s been off the track for 262 days.

There was a lot to like about Even Flight’s effort to finish third at Gowran Park yesterday and he may be able to go two better today. Philip Fenton’s gelding has been in good, consistent form and still has scope to improve further. He showed he can handle the combination of two and a half miles and heavy ground at Gowran so there is a fair chance he can get involved again today.

Punitive heads the weights and will be one of the principals. He won over the course and distance last time, albeit scrambling home in the end, and that followed his maiden hurdle win at Limerick in November. He has a 6lb rise to contend with. Minx Tiara and Askann are two more for the shortlist, especially the latter who has improved on each of her previous three starts and went close to winning again at Fairyhouse on New Year’s Day.

This isn’t a very strong maiden hurdle and it looks a good opportunity for Noel Meade’s Young Ted to get off the mark. He had a belated start to his season when reappearing here last month but he performed with real credit on that run, finishing fourth to Mr Hendricks. Prior to that there was a 261-day gap back to his very good second to My Sister Sarah in the big three-mile handicap hurdle at the Punchestown Festival. With race fitness now attained and coming up another two furlongs in trip, he has plenty going for him.

Desire De Joie could give him most to do. He probably put up his best effort yet when a six-length third to Foxy Jacks over two and a half miles at Punchestown. He can improve again and may also enjoy this extra test of stamina.

Cut The Mustard could be the answer to this trappy contest. She has won two of her three races this season, finding only classy stablemate Elimay too good in between, and probably represents a solid option here, receiving with from all six rivals. I’m A Game Changer comes out slightly best at these weights but he hasn’t been seen since earlier in the season, when running second to Tornado Flyer. Perhaps he’ll need this run. Ten Ten has good course form but he was very disappointing when last seen at Naas and you could legitimately ask if the performance of Yaha Fizz at Punchestown last time was as good as it looked, considering he was in front on his own and it represented a significant upturn in form to what he had done recently.

Next best: I’m A Game Changer

Spare Brakes could gain compensation for a last fence fall at Fairyhouse last month. He probably wouldn’t have won that contest (won by Velocity Boy) but he was certainly going to be at least a close third. That was two good runs in a row this term, following his second over hurdles at Clonmel and if he can maintain this level of form, he should be involved here.

Locally-trained Conright Boy has equally good claims, having finished second on three of his last four starts. He isn’t as good as he used to be but is certainly competitive at this level and should run well again. Grey Atlantic Way performed with credit on his handicap chase debut at Thurles and if able to build on that, he can have a say also.

Wishmoor has found a little form since joining Johnny Levins and may get his head back in front here. At his best he held marks in the low 130s but he has tumbled down the handicap and showed the first sign of a resurgence over this course and distance when he finished second to Se Mo Laoch, the pair of them coming well clear. He got a 3lb rise for that but he is still only rated 114, so will be a big player if he is able to move forward again.

Mr Diablo runs well at this course and finished second in this last season however he ran no sort of race at Leopardstown for his latest start. Ice Cold Soul finished ahead of him in that contest (good two-mile-five-furlong handicap chase won by Glamorgan Duke) and he should find this easier. He is lightly-raced compared to these veterans so might have a little more improvement in him. 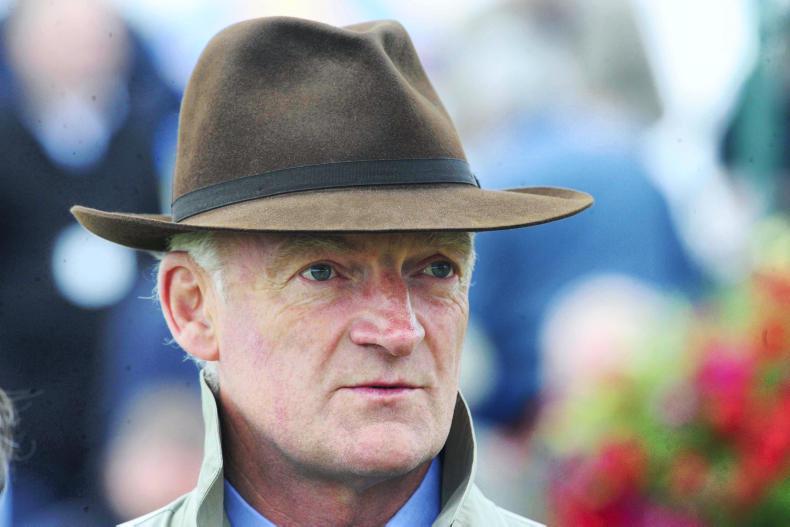