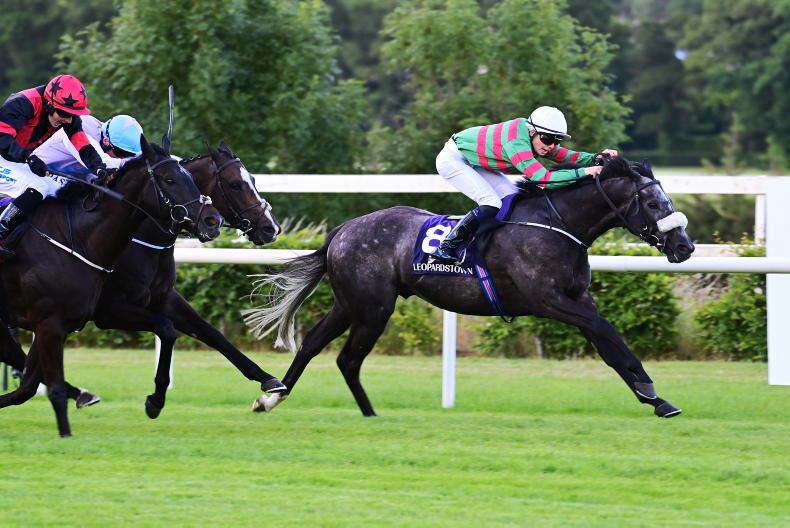 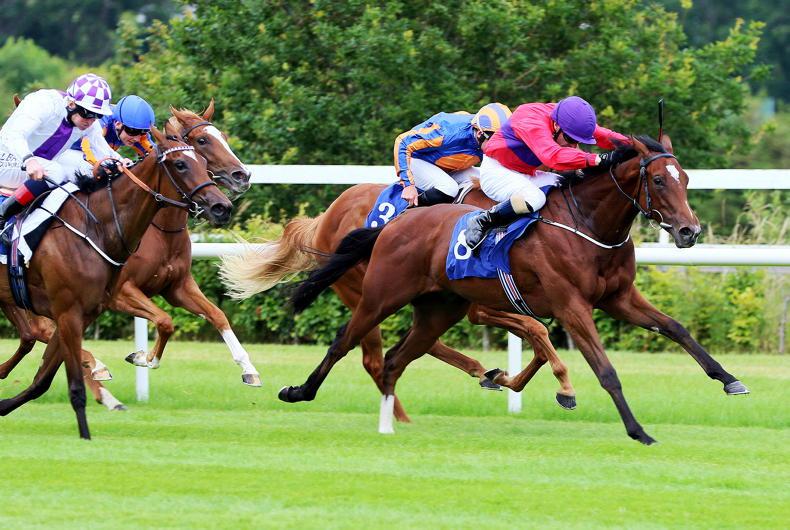 ON an absolutely stunning evening for Jessica Harrington, apprentice Dylan Kidd enjoyed a fairytale start to his career in the saddle as he made his first ride in public a winning one aboard Jungle Cove in the Irish Stallion Farms EBF Nasrullah Handicap, which completed a double for the trainer who also bagged a treble at Limerick.

In the most valuable (€100,000) flat handicap at the track outside of Irish Champions Weekend, Kidd produced a masterful effort that belied his inexperience to pull off a 20/1 upset on the experience five-year-old who was notching up the third win of his 30 race career.

The Trim-born rider, who only graduated from RACE last week, received much the biggest reception of the night in scooping this huge pot.

The 16-year-old bided his time on Jungle Cove, who also carries the colours of his trainer, and then went for a daring run down the inner as the field turned for home.

Remarkably for Leopardstown, Jungle Cove enjoyed a totally untroubled run against the far rail and he appeared on the inside of last year’s winner Mosala to strike the front inside the distance en route to a three-quarter-length success over Casanova, with Mosala taking third.

“He’s a brilliant horse, he’s my lead horse and he works like a group horse,” said the trainer Harrington. “Dylan gave him a great ride, full of confidence and stuck to the inside.

“He didn’t interfere with him, when proper jockeys get on him, they kind of bully him and he hates it. He loved going around there thinking he was in charge. Dylan has been with me all winter. He’s a super worker.”

Meanwhile, the thrilled winning rider added: “It’s incredible. It just happened so easily. I got up the rail after having a nice position. I’ve ridden this horse a few times at home.

“My instructions were to go out, enjoy it and see what happens from there. I owe a big thanks to Mrs Harrington and everyone in the yard. This is very special.

“I only found out I was riding him on Tuesday morning. I was delighted. Everything leads up to this moment - it’s unreal. I’m from Meath and have been doing ponies and horses all my life. You learn loads in RACE and I’m down with Leighton [Aspell] on Tuesdays and Thursdays doing work on the simulators. He’s a big help to me.”

Harrington’s Ha Ha Ha is building a progressive profile and continues to look a filly on the up on the evidence of her all the way success in the Built With Pride By Richmond Homes Handicap over a mile. Fresh from landing a Listowel maiden last month on her third outing, the CBR Partnership-owned daughter of Dark Angel bossed this six-runner affair from the front.

Shane Foley dictated a tempo to suit himself and the 11/4 shot was always in control. She had her rivals toiling in vain when quickening well with over a furlong to run and reached the line with a length and a half to spare.

“She’s a nice filly who is improving and we’ll just let her climb in the ranks. Later in the season she will look for black type and I think she will be a better four-year-old. Easier ground might suit her better but it’s lovely, safe ground out there,” stated the trainer.

THE fallout from Rosscarbery’s disqualification in the Pretty Polly Stakes continues to rumble on but the teak tough and relentlessly progressive four-year-old let all her abilities do the talking on Thursday evening as she claimed a second Group 3 triumph of the season in the Irish Stallion Farms EBF Stanerra Stakes.

Now a winner of five her six starts for Paddy Twomey at a range of trips from a mile to this mile and three-quarters, Rosscarbery was turning out just 12 days after being disqualified from third in the Pretty Polly.

In recording a hard-fought and admirable short-head success over Emily Dickinson, this Robert Moran-owned daughter of Sea The Stars served notice that she will remain a force at the top level this season.

On her first time at this trip for almost a year, the 15/8 favourite moved to the head of the field for Billy Lee approaching the final furlong and soon held a useful lead.

However, it all got very tight late on as Emily Dickinson charged home and the latter forced a bobbing finish and a photo, but Rosscarbery deservedly got the verdict by a short-head.

“She’s tough and she’s hardy and has a bit of class. She’s come out there and carried her penalty. I think she deserves a chance now so we’ll have a look at various options for her,” stated Twomey.

“The Group 1 Prix de Royallieu on Arc Weekend over this trip is one race and she’s in the Yorkshire Oaks while she wouldn’t have a penalty if we ran her back in the Blandford Stakes on Irish Champions Weekend. I’ve also put her in a Group 1 in Germany.”

A tremendous season for the Hilary McLoughlin seems to get better with every week that passes and she followed up a winner at Fairyhouse the previous evening by sending out Howyoulikethat (10/1) to land the 50-80 rated seven-furlong handicap.

Now a dual winner this season, the Top Five Syndicate-owned five-year-old was produced with a powerful last furlong charge by Ben Coen to cut down Might And Mercy for a decisive two-and-a-quarter-length triumph.

Another trainer with his string in fine fettle is John McConnell whose Smaoineamh Sile (17/2) defied a 10lb rise for last month’s course-and-distance success in the 47-65 rated Richmond Homes Handicap over nine furlongs.

The Peter Commane-owned daughter of Pride Of Dubai struck the front under Dylan Browne McMonagle turning in and she bravely lasted home from Complete Fiction who charged home from the turn in to lose out by a diminishing neck.

Thornbrook impresses in double for Joseph

JOSEPH O’Brien’s Thornbrook (11/4) announced herself as a filly of some potential for the second half of the season with a successful debut in the Irish Stallion Farms EBF Fillies Maiden over seven furlongs.

A half-sister to the classy Magnanimous and the smart Seisai (both trained Joseph O’Brien), this Moyglare Stud Stakes entrant had plenty to recommend her and she turned in a nice display.

Declan McDonogh got her to the front as the last furlong loomed and she kept on nicely to reach the line a length and a quarter ahead of the 40/1 shot Lan Mara who made great progress from her debut at Naas the previous Saturday.

There was a further half-length back to the favourite, Dame Kiri, who also made an encouraging start to her career.

“She’s a nice filly and I know Joseph thought a bit of her. She travelled very nicely and Declan felt she’d improve plenty from this and I’d say it will definitely be a stakes race next for her,” stated O’Brien.

The trainer made it a double here and four winners on the night when Shoshone Warrior got loose on the lead in the amateur riders’ conditions race over just short of two miles.

The well-backed 7/2 chance, who was without a win since landing a maiden here two years ago, enjoyed an uncontested lead throughout under John Gleeson and was afforded far too much leeway by his rivals.

By the time the leader turned for home, it was far too late for his rivals to make any semblance of an impression and Shoshone Warrior maintained an unfaltering gallop to get home by 10 lengths from his odds-on stablemate Okita Soushi.