Title: KILGUILKEY INTERNATIONAL: Whelan over the moon with "unreal" double 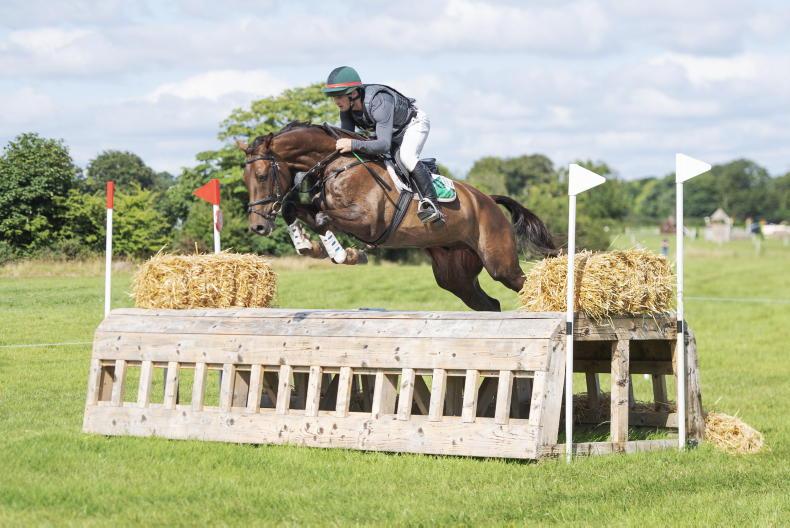 “I COULDN’T believe it, I just couldn’t believe it,” said Wexford’s Patrick Whelan who recorded a double at last week’s Semalease Kilguilkey House international. “I’d only ever won two internationals in my career before so to win two on the one day was unreal.

“I wouldn’t mind but I was just delighted the way all my horses performed so the wins were really a bonus. Hopefully now, this run can continue. What made Altitu’s win all the better was the fact that his owner/breeder, Seamus Carew, was there to see him – which isn’t always the case. Seamus puts a good bit of money into his horses so it’s great to have them going well.”

Altitu faced 37 opponents in the DJI Group CCI3*-S but, as he was on a score of 31 penalties, only two of those rivals were on a lower mark. Ian Cassells won the phase with Master Quality Imp (28.4), who he withdrew following a clear show jumping round while a pole down show jumping was the main reason Co Antrim’s Alex Houston dropped from second to seventh with her home-bred Beach Ball gelding, Atlantic Rockstar (34.2).

Co Cork-based English international Daniel Anderson partnered three horses in this class and finished second and fourth, on his dressage scores, with the Irish Sport Horse geldings Lux Like Cruise (32.2), a son of Lux Z, and the OBOS Quality 004 bay Global Fugitive (33.9). From nearby Kilroe, Sian Coleman was third, for the third time running in an international, on the seven-year-old Dignified Van’t Zorgvliet mare Blarney Monbeg Pepper (32.8).

Co Wicklow veterinary surgeon Michael O’Toole will have been annoyed with himself for omitting a cross-country fence with First Obama who was on 30.8 after a good performance in the dressage arena followed by a clear show jumping round.

The Whelan double came up in the Black Rainbow CCI1*-Intro where he again completed on his first phase score, this time with the Dutch Warmblood gelding Ikoon Lan DHI (30.6), a nine-year-old by Emilion.

Here, Fraser Duffy was second on the ISH gelding You Two Hotshot (31.2), a six-year-old by Warrenstown You 2, while an ex-racehorse got into the mix when Denmark’s Charley Walshe, a longtime resident of Westmeath, finished third on the 10-year-old Black Sam Bellamy gelding Herobrine (31.3).

Co Down’s Abby Cummiskey led after dressage with Crackerjack VII (30.4) but had an expensive pole down to drop to ninth.

“The cross-country tracks were really good, well up to scratch and they rode well,” commented Whelan. “There was a right bit of rain on Saturday, which made the ground a bit slippy, but it was nice on Sunday. I’ll definitely take Altitu to Millstreet and would hope to be in the top five there; he’s a real nice horse but still needs more mileage.

“His main target this season is the seven-year-old championship at Le Lion. I’m not too sure about the other fellow yet but I do know I want to get up the levels quickly with him.”