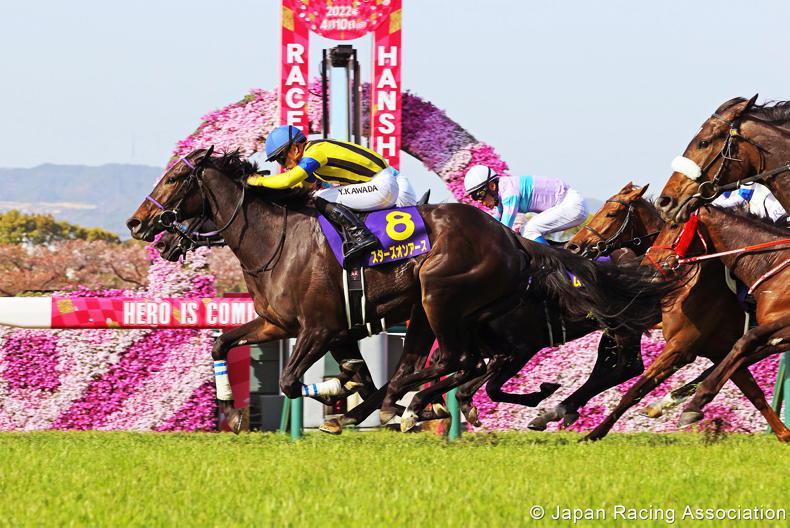 STARS On Earth sprung a surprise win in the first Japanese classic of the year, the Group 1 Oka Sho (Japanese 1000 Guineas) at Hanshin Racecourse last Sunday winning in a blanket finish.

The Duramente filly, with Yuga Kawada up, got through between rivals in the final strides to win by a nose from Water Navillera, who looked to have the race in the bag with 50 metres to go.

Namura Clair took third as little more than two lengths separated the first 10 finishers, including the favourite, Namur in 10th.

Finally getting a gap, though bumped by Personal High while doing so, the Duramente filly displayed a fine closing kick to snatch the win from Water Navillera at the line.

“I’m just so glad that she actually snatched the win at the end,” jockey Kawada reported to the press. “I knew we had caught up but couldn’t tell who’d won.

“The plan today was to stay in mid-pack and let her run in a comfortable rhythm. Her strength and determination that shone and gave us the win today.

Stars On Earth is out of the Smart Strike mare Southern Stars, who is a daughter of multiple Group 1 winner Stacelita.

The race was billed as a rematch between the 2021 Japanese two-year-old filly champion Circle Of Life and regular rival Namur.

Namur came into the race with a win in the March 5th Group 2 Tulip Sho, where Circle Of Life finished third. She too finished well to take fourth place.

Stars On Earth, once a winner last year, had finished second in both her previous 2022 starts in Group 3 races -- the Daily Hai Queen Cup at Tokyo and the Fairy Stakes at Nakayama.