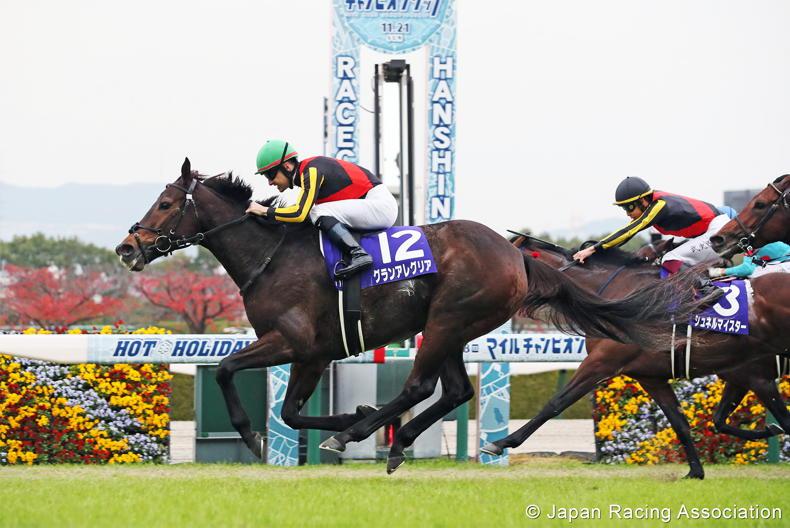 THE Group 1 mile Championship was once again held at Hanshin as renovations continue on Kyoto Racecourse, the usual venue for the deciding leg for the leading miler title.

Open to three-year-olds and above, the Group 1 contest had €800,000 on offer to the winner

Defending Champion and odds-on favourite Gran Alegria once again proved that she is the best of her generation in the sprinting and miler ranks.

Announced as her last career start prior to the race, the Kazuo Fujisawa-trained filly gave a fifth Mile Championship crown to her handler, Fujisawa himself also retiring in early 2022.

The only concern for those willing to take the prohibitive 4/6 odds on offer was at the start when the typically ultra-reliable filly broke sluggishly to race further behind the pace from her usual prominent style.

It proved nothing more than an inconvenience as the filly moved effortlessly through the field to run out a three-parts of a length winner.

Evidence to the strength of this year’s renewal, Group 1 winners Schnell Meister, Danon The Kid and Indy Champ finished in second, third and fourth respectively

In the 22 annual Group 1 races on the JRA fixture list, historically and also current public interest is focused on longer distance races.

This invariably leads races run over a mile and shorter to lack competitiveness and strength in depth. However, three of the first five horses home in the 1,600 metre race were filled by three-year-olds, the future of the division looks sure to be hotly contested.

By Deep Impact, Gran Alegria is the first living produce of the dual Group 1 winning American mare Tapitsfly (Tapit). She had produced just two living foals from five years as an active broodmare. Tragically the mare died from complications during foaling in 2018. Her 2017 produce and full-brother, Blutgang, made a winning debut in June 2019 but has yet to return to the track since.

Gran Alegria is retiring a six-time Group 1 winner and a seven-time winner in total from her 10-career starts, amassing earnings of over €8,300,000.

She is the sixth mare in Japanese racing history to earn in excess of one billion Yen. Her six Group 1 titles range from six furlongs to a mile, her exploits have already essentially all but retained the end of year title for the Champion Sprinter and Miler in the JRA.