We asked some racing personalities for their favourite Irish Derby memory 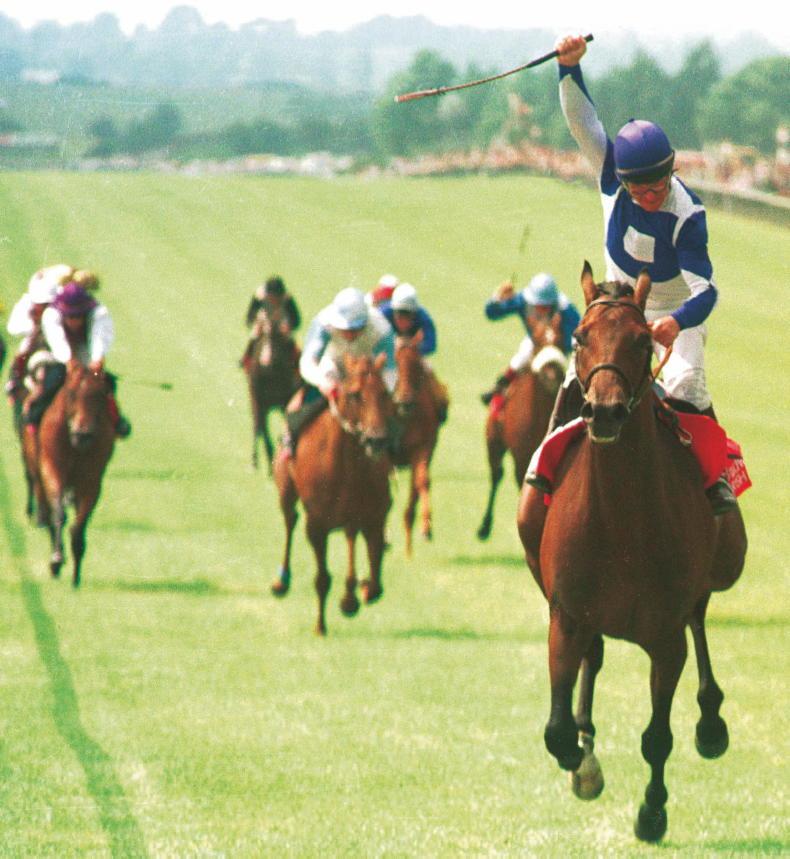 St Jovite runs away with the 1992 Irish Derby. His jockey Christy Roche also won the 1982 running on Assert and the 1997 edition aboard Desert King

‘The races that put

the Irish Derby on

I remember going up to see the Derby in 1962, hoping Arctic Storm would win for John Oxx Snr, but he finished second to the French horse, Tambourine II. That was the first year of the Irish Sweeps sponsorship and there was over £50,000 for the winner, which made it the richest race in Europe. You could buy a house in Dublin for £2,000 at the time.

My favourite Irish Derby memory is Santa Claus winning in 1964 for jockey Billy Burke. Billy was from Naas and was essentially a work rider for trainer Mick Rogers. Scobie Breasley has won on Santa Claus at Epsom but Mick wanted Billy to ride him at the Curragh. They cantered in.

It was races like those in the 1960s that put the Irish Derby on the world map. – Ted Walsh, trainer and broadcaster.

‘A screamer for us bookmakers’

Frozen Fire was a screamer of a result for bookmakers in 2008. The Epsom runner-up Tartan Bearer was the even-money favourite for Sir Michael Stoute and Ryan Moore. We laid plenty of others in the race too and, to top it off, I backed Frozen Fire as I thought he was too big a price. – Willie Power, former racecourse bookmaker.

‘Surreal sensation in the grandstand’

I will never forget the roar of the crowd back in 1992 when St Jovite was extending his lead and going away from Dr Devious and exacting revenge for his defeat by the same horse at Epsom. More recently there was the surreal sensation of being alone in the stands watching Santiago winning the ‘behind closed doors’ edition of 2020 in the middle of a thunderstorm! - Garry O’Gorman, Senior Flat Handicapper, Irish Horseracing Regulatory Board

My first Irish Derby memory is Desert King powering home under Christy Roche. I remember I was on a family holiday in Tralee when he won his maiden at the third attempt the previous August in what was a very exciting time following the new master of Ballydoyle. Just before the atmosphere hit fever pitch, The Curragh of Kildare was sung beautifully as racegoers gathered themselves for the pinnacle of the Irish flat season. On that sunny June afternoon I remember the huge roar that lit up the Curragh when Desert King went for home a furlong out, overtaking the Epsom Derby runner-up Silver Patriarch.

Desert King finished second to older international superstars Singspiel and Pilsusdski on his only two subsequent starts, so I think history should judge him as a good Derby winner. He was certainly a real favourite of mine as a new young racing enthusiast. – Peter Burke, TD & Minister for State

I loved those years when the Epsom and Chantilly winners clashed at the Curragh – Generous beating Suave Dancer in 1991 was special. But the year before was my all-time favourite. Salsabil became the first filly to win the race since 1900. It was a very sporting decision to run by owner Sheikh Hamdan and he gave me the most wonderful interview on RTÉ afterwards.

It was a great race. You had rookie trainer Roger Charlton going for a Derby treble in his first season and he ran both the Epsom winner Quest For Fame and eventual runner-up Deploy. You had the Epsom runner-up Blue Stag and Henry Cecil’s Belmez, who went on to win a King George.

Having John Dunlop, Willie Carson and breeder Pat O’Kelly involved in the winner meant a lot to me too.

That weekend is remembered by most people for the homecoming of the Irish soccer team from Italia ’90. They had reached the quarter-finals and lost out to the hosts.

Everyone was talking about Jack’s Army but we had our own story to tell. - Robert Hall, former auctioneer and broadcaster.