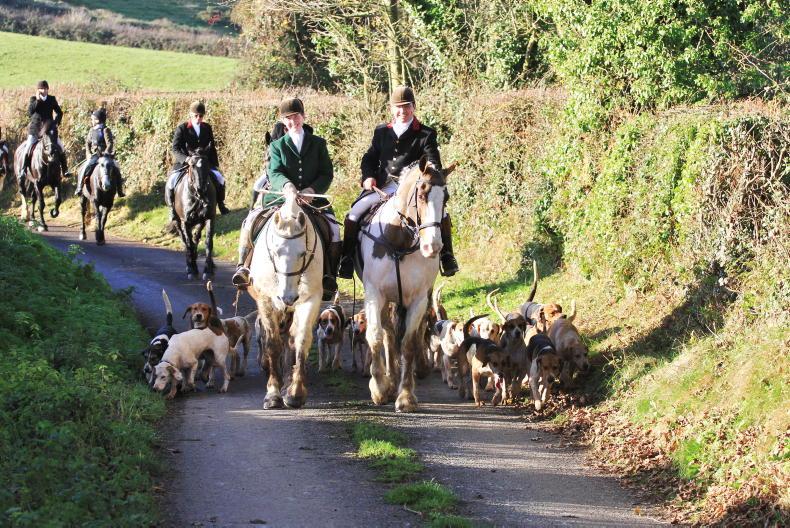 Dan Moloney, huntsman of the Golden Vale Foxhounds, is joined by Emma Ryan, huntswoman of the Suir Vale, at their meet at Drombane \ Catherine Power 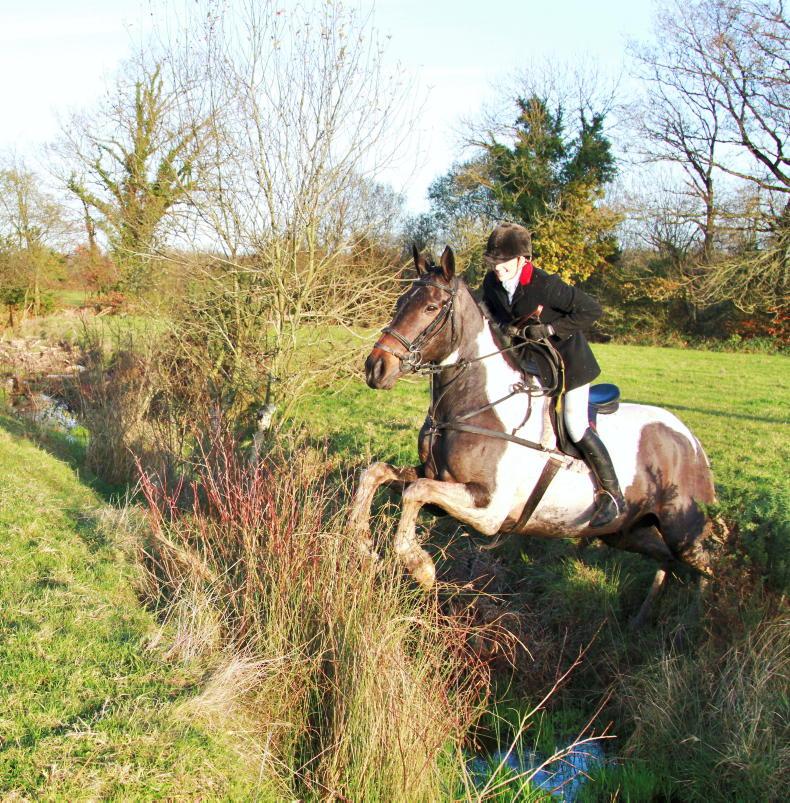 Whipper-in to the Golden Vale Foxhounds, Cynthia Hanly out hunting with her lovely coloured hunter \ Catherine Power
Previous Next

THE village of Drombane, deep in the very sporting heart of Co Tipperary, saw us make a return visit for a meet of the Golden Vale Foxhounds. Since we hunted with them last season from a meet at Clonakenny, they have found a new huntsman in Dan Moloney, the previous incumbent Michael Comerford now hunting the county pack in his native Laois. Dan has proven to be a most enthusiastic and able replacement. He comes from Roscrea and by what we saw, will go on to be a great success in his new role.

“Hunting, it’s all I do,” was his reply when asked about his C.V., having started with Richard Markham in the Ormond and got the bug for hounds and hunting, he started his own pack, the Roscrea Beagles, before disbanding the pack and moving to America to gain experience with Johnny Dean and the Radnor Hunt in Maryland. All the while he kept his hand in as an equine dentist, a profession he still practises as time allows in between hunting.

Still in his first season and no breeding program to fall back on, he has been dependent on drafts from such packs as the Meath, The Blazers and the Old Mill in Limerick. He was hunting 11 and a half couple of cross-bred hounds and every one of them looked as if he could do the business.

Every huntsman needs moral support and in Dan’s case it was supplied by his fiancé, Sarah Loughnane, who was out on the day. She works as a veterinary receptionist so she has to be a natural problem-solver. The couple hope to get married once the rigours of the hunting season and Covid allow.

Hunt chairman Michael Costigan was out on his good dun as was his near neighbour Johnny Martin, accompanied by his three daughters Lucy, Hannah and Grace, all from Clonakenny. Our huntsman was well mounted on a coloured horse of Pat Hanly’s and coming out of that yard he was bound to be well schooled. Pat’s daughter Cynthia, on another coloured mount, is his very able and experienced first whip with Brian Walsh from Templemore acting as assistant.

The Golden Vale and the Suir Vale Harriers share country and putting aside the rivalries that often bedevil neighbouring packs, Suir Vale huntswoman, the very talented Emma Ryan, was out and rode up front with Dan and showed him the country, it being his first day ever to hunt hounds in Drombane. Holding a watching brief was Suir Vale master Seamus O’Dwyer who, no doubt, was able to compare and contrast the performance of the two packs from the same meet. While many rural villages are now bereft of a pub of any kind, Drombane boasts a really successful and thriving establishment known locally as Ned Ryan’s which is currently getting a huge facelift with the addition of a beer garden and function room, an unusual addition to the premises is the recreation of the shop fronts of the many the village stores long gone. The Ryans are a very sporting family who only recently bred a Cheltenham winner and they farm extensively in the area.

With the large field, including visitors from the near by Ormond, Laois and North Tipperary, led by former master Jeremy Kearns and his son Charlie, all being suitably refreshed, our huntsman moved off the first draw at Larry Burke’s farm.

It was great to see so many old friends and hunting companions out, notably the inimitable Mattie Maher, now senior master of the Golden Vale whose hunting memories go right back to Tim Hyde and Michael Purcell and the founding of the pack. He was on a horse borrowed for the day from John Ryan Moore of Dualla and if the horse wasn’t fully schooled before Mattie sat up, he certainly was before the day ended!

Award-winning Shorthorn breeder Noel Stanley was out as was Frankie Fogarty from Templemore on his good grey, having received a new kidney since we last saw him hunting in Clonakenny.

Despite the fact the farm had been extensively re-seeded, local farmer Larry Burke insisted his farm nearby the village should be the first draw. A small gorse plantation was home to the first fox of the day. Plummer, a hound drafted from the Old Mill, opened and soon the pack rallied to him and they were away over some good country across the main Rossmore road, only to mark him to ground and give him best.

It was there I saw whipper-in Cynthia Hanly on her quality batty come back at speed to collect some wayward hounds. Now I’m no physicist but I’m sure the sound barrier must have been broken as she just floated over the ground. Full marks, Cynthia!

Hounds drew on across country to Kennedy’s where hounds had loads of covert at their disposal. It was there we met former whipper-in and area manager for the day, Owen Mockler, with his two juniors, his son Jack and young Shane Lee, who were schooling their ponies while hounds drew.

Schooling had to hurriedly abandoned as hounds found in some gorse just below the farmyard and he set his mask for Coolbawn Wood and ran on to Burkes of Roskeen where the field were met with some great Tipperary bank country. Visiting from Laois was Vincent Neville, known as the man to follow if you’re up to it, on a good grey, beautifully turned out as you would expect from Ireland’s leading purveyor of pre-hunted clothes.

Another grey to turn in a copy-book performance was Nick Seale on a horse supplied by the producer of Rolls Royce hunters, Jim Derwin. Nick, in a previous life, was field-master to one of the UK’s smartest packs, The Heythrop, but has now settled in the Nth Riding. Hounds hunted on through Clancy’s where he found a welcoming shore and was given best.

All in all, it was an excellent day hunting and those still left when the huntsman blew for home, went home more than happy.

Founded by the late Tim Hyde, who had won the Grand National in 1939 on Workman. Tim had hunted the family pack, The Shaun Peels, in his native Inishshannon before coming to Tipperary and hunting a country once hunted by the Thurles and Kilshane Harriers extending from Devil’s Bit to Bansha. Allowed to lapse in the 1950s due to Tim Hyde’s riding injury, they were reformed in 1975 by Michael Purcell and Tim Hyde Jnr.