The champion jockey was in fine form at the Co Kilkenny track on Wednesday, recording a treble 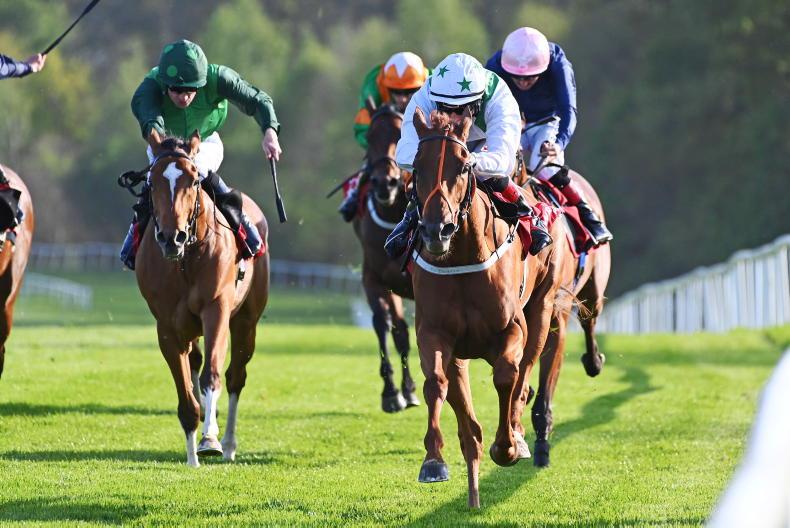 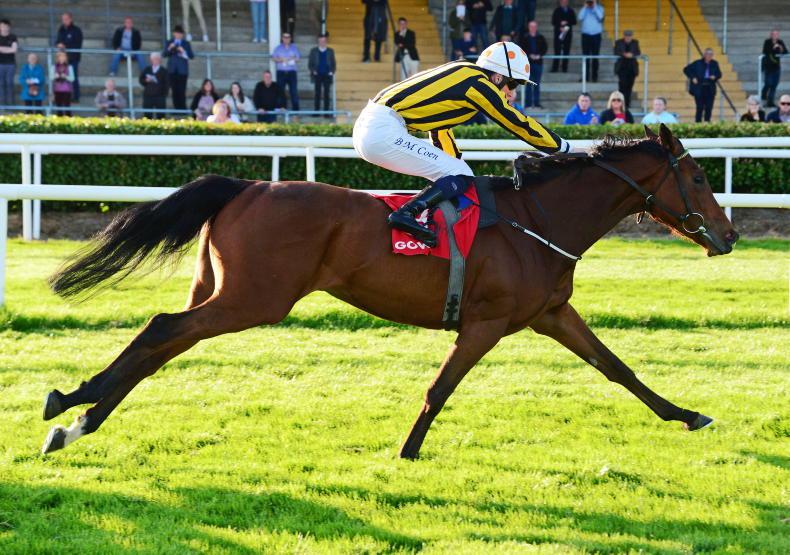 A TERRIFIC evening for champion jockey Colin Keane yielded a treble which took in both listed events on offer and the rider brought up his hat-trick aboard the Paddy Twomey-owned and trained Rumbles Of Thunder in the Irish Stallion Farms EBF Victor McCalmont Memorial Stakes.

A dual listed winner in France last year, the daughter of Night Of Thunder shaped up nicely when fourth to Thunder Kiss on her Irish debut at Cork last month and she looked quite at home as she dropped down in trip. The 3/1 chance was travelling powerfully for Keane for much of the straight and the rider deftly moved her across to challenge against the stand’s rail. When she did strike the front Rumbles Of Thunder wrapped this up in a matter of strides and she dished out a three-length beating to the 102-rated Seisai.

“She handled the drop back in trip from a mile and a half well. I probably had her a bit fresh for her first run at Cork when she ran a nice race with the future in mind,” said Twomey.

“Trip-wise I think anything from a mile and a quarter to a mile and a half is fine. She’s a three-time listed winner, so we will look at a group race for her now.”

Keane’s two other winners were supplied by Ger Lyons and the second of those came aboard Yaxeni (7/2) who got her turn at listed level in the Vintage Tipple Stakes.

A winner of the November Handicap last season and placed multiple times at stakes level over the last couple of seasons, the SBA Racing Limited-owned five-year-old was dropping in class after journeying to Nottingham to take on Trueshan last month.

Keane made plenty of use of this confirmed stayer by getting her to the front inside the opening half mile and the pair were in control thereafter. The strongest challenge in this near mile-and-three-quarter event came from Pita Pinta but Yaxeni was not for catching and ultimately prevailed by a length and a quarter with last year’s winner Mighty Blue back in third.

“She was kept in training to win a stakes race and we’ll talk to the owner’s manager Ed Sackville but I’d say she will have a break until the autumn as the deeper the ground the better for her,” declared assistant trainer Shane Lyons.

Earlier the Keane-ridden and Lyons-trained Georgeta produced a display in keeping with her position as the 8/13 favourite for the seven-furlong maiden.

A fine comeback fourth behind Tuesday at Naas in late March looked to give this daughter of Night Of Thunder a clear edge over her rivals and her supporters didn’t have any anxious moments. The David Spratt, Sean Jones and Lynne Lyons-owned filly led around two furlongs out and she went on to finish three lengths ahead of A Shin Undine. She shouldn’t have any trouble stepping up in class over the coming weeks.

AN interesting evening’s racing played host to a couple of useful looking maidens and there was a particularly taking effort in the offing in the Irish Stallion Farms EBF Fillies Maiden over an extended nine furlongs where One For Bobby struck at 33/1 on her debut.

Johnny Murtagh’s charge, who is a daughter of Frankel and the stakes-winning One Spirit, was drawn wide and then had to look on from last which represented a nigh on impossible task at this track. However, she rose to the challenge in fine style for Ben Coen. After creeping her way into midfield she steadily worked her way over to challenge on the far side of the track and came clear in the last furlong to score by two and a quarter lengths and look a filly of considerable talent.

“She was big and backward last year and I thought it would be good if she came here and ran in the first four or five, so the fact she’s won is great,” reported Murtagh who trains the filly for Ann Marshall.

Earlier Inchturk (12/1), in the colours of Horse Racing Ireland Chairman Nicky Hartery, got off the mark at the fourth attempt on the mile maiden.

This fine son of Le Havre had shown plenty on his two previous visits to this track and took a step forward in the manner of one who could keep progressing through the summer. Ronan Whelan’s mount got into a challenging position inside the last quarter of a mile and showed a fine attitude under pressure to get the better of the 84-

rated Moe Sedway by a head.

“He’s very genuine. I was delighted with him here the last day and he had come on well in his home work. This trip suits him well but he could go further in time. He’s just a lovely horse to have,” reported the trainer.

THE card concluded with a series of typically competitive handicaps and the first of these, an apprentice rider’s handicap over a mile, went to the Johnny Feane-trained Urban Oasis (4/1) who gave Jamie Powell his first winner of the season.

The Reginald Roberts-owned son of Fast Company did well to win as he found himself checked and tight for room against the stand’s side rail with over a furlong to run. He recovered well to challenge inside the distance and a bobbing finish with the hat-trick chasing Lamprog (who was hampered in the same incident) went his way by a nose.

The first division of the 47-65 rated mile handicap produced a 22/1 winner as Maccliff and Siobhan Rutledge (who picked up a six-day careless riding ban from the race won by Urban Oasis) made most of the running to defeat the 10-year-old Eastern Racer by just under two lengths.

The winner is trained by Ger Hussey for the Le Cheile Aris Partnership and looked a somewhat unwilling participant in the preliminaries but her application through the race couldn’t be faulted.

The other division of that handicap went to Handbags N Gladrags who struck for Andrew Kinirons and Billy Lee having been sent off quite a well supported 10/1 chance.

The Ciara Doyle-owned filly had plenty to do from the rear at halfway but found herself in the clear in the straight as most of the field congregated over to the stand’s side rail. She took control in the final furlong to defeat Barretstown by a length and a half. 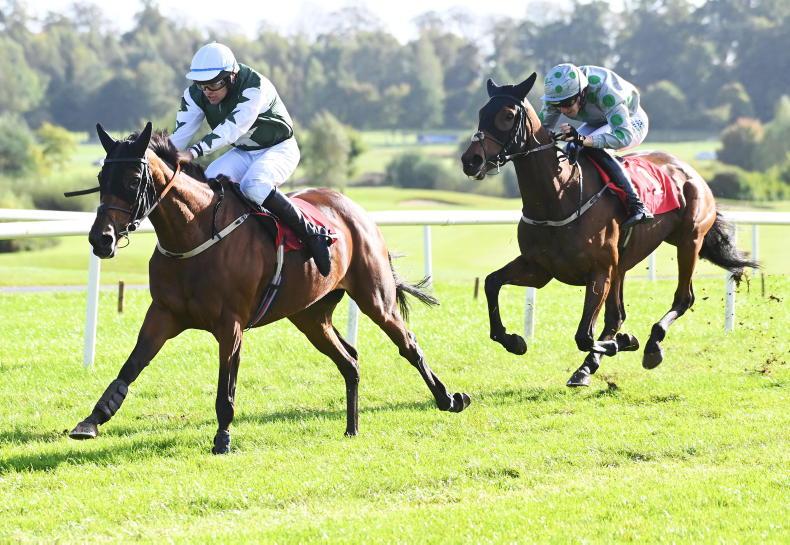 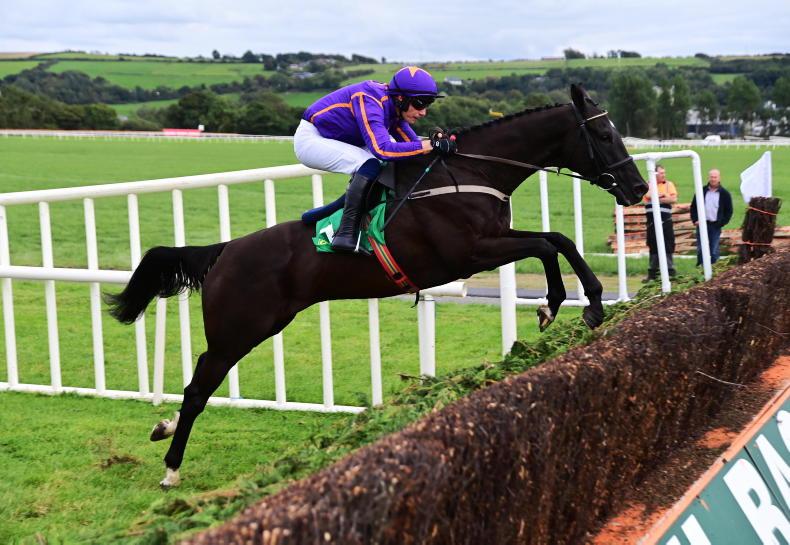 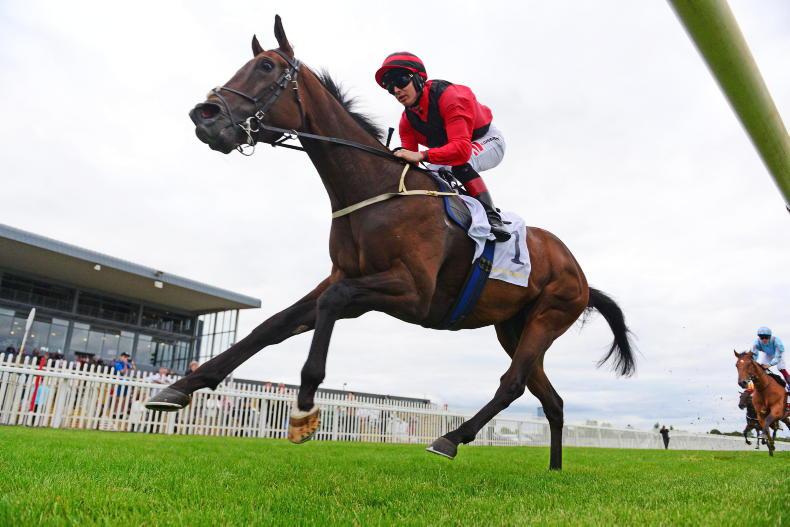 Andy Bate
TIME WILL TELL: Mutasarref at home at group level
There were two good quality performances on the Cork card last week 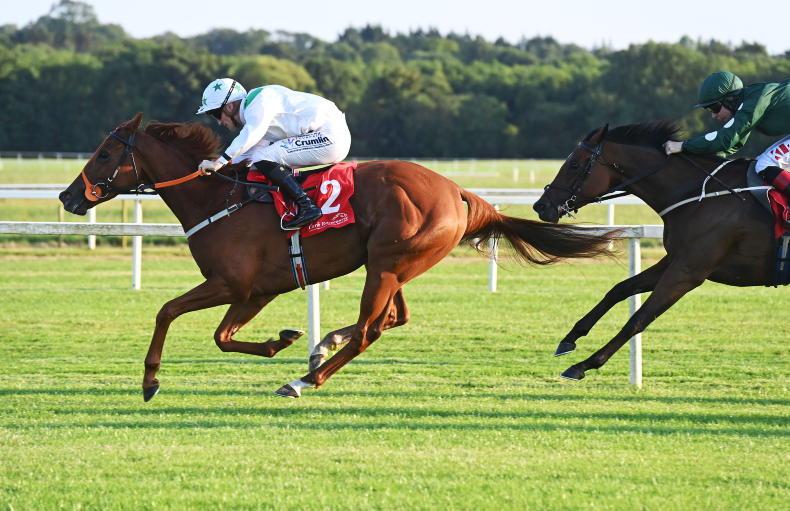 Ryan McElligott
CORK FRIDAY: Another thundering success for Twomey
Rumbles Of Thunder went to the front with around a furlong to run and went on to record a smooth two and a quarter lengths triumph over the Irish Oaks third Cairde Go Deo