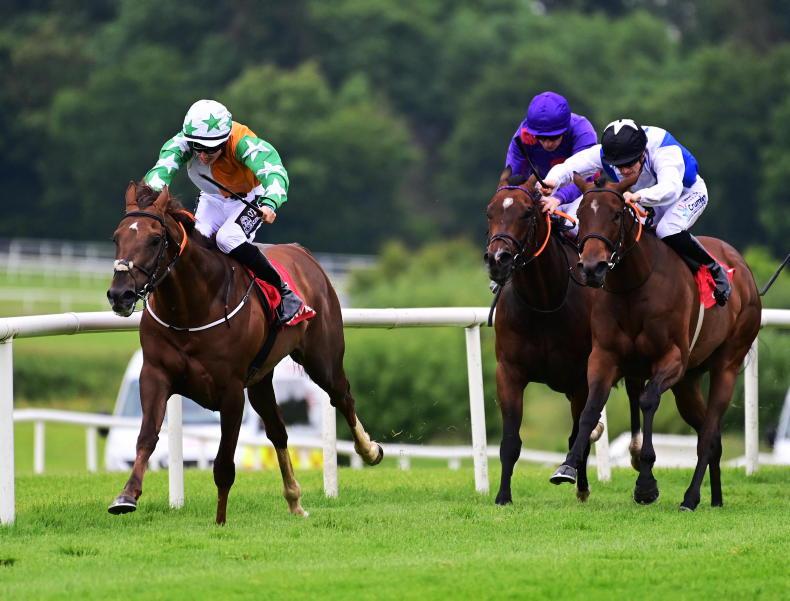 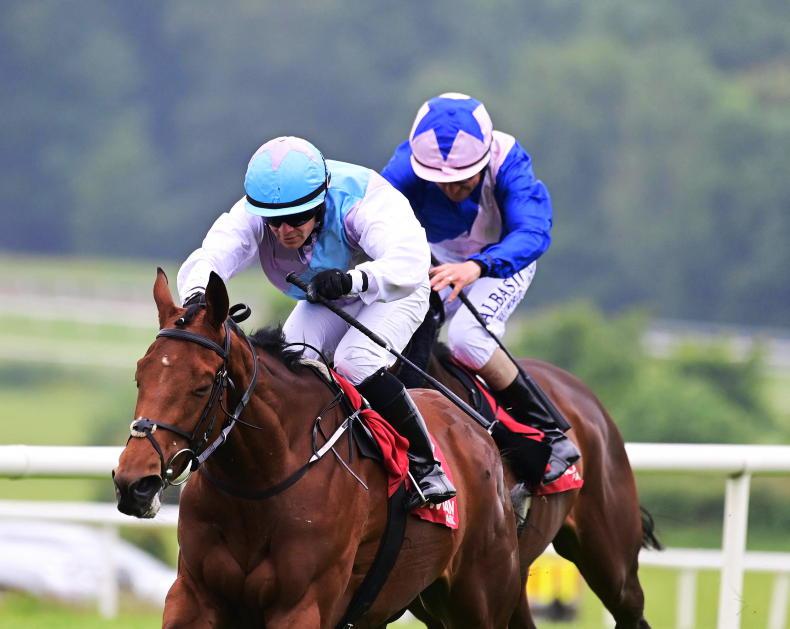 A DUAL premier handicap assault at Galway looms large on the horizon for Spanish Tenor who produced a fine effort from the front to dominate the featured Sonix Entertainment Handicap over seven furlongs.

“Cian was very good on him,” said McGuinness. “The wide draw was a worry as he is a horse that likes to dictate but he was able to get him to the front early on. He’ll be heading to Galway where I’d say he will run in the Colm Quinn Mile and the Ahonoora Handicap, but he will run again before then I’d say.”

Dha Leath made it two wins in three starts for Gavin Cromwell in the extended nine-furlong handicap.

This Mehmas filly, who carries the colours of Gerard Clarke, was 5lbs higher than when winning at Limerick in April and showed that she is keeping pace with her rise up the weights. The 8/1 shot had work to do from midfield turning for home but responded well to Gary Carroll’s promptings to run down the top-weight, Bay Of Bengal, inside the distance and succeed by a length.

The four-year-old was restored to the form that saw him win at Limerick last summer as he overhauled the pace-setting Never Back Down (whose jockey Dean Curran was hit with a five-day whip ban) in the closing stages before reaching the line three-parts of a length ahead of Helen De Pourtales.

Lordan endeared by the performance

WAYNE Lordan made his only ride of the day a winning one as Term Of Endearment (9/2) bagged the median auction fillies’ maiden over an extended nine furlongs.

The Carmel Acheson-owned daughter of Sea The Moon was making her debut for Henry de Bromhead after showing up well in a Leopardstown maiden late last season and she won nicely. After taking a lead for much of the race, Term Of Endearment looked to have the front-running favourite Paris Peacock covered as the last furlong loomed and she finished out her race in good style to score by two and a half lengths. The front pair finished 10 lengths clear of the rest.

“I had a good draw and was able to get a lovely position and she’s won nicely. She hit the line well and I felt like I still had plenty underneath me so it was a nice performance. I’d like her,” declared Lordan.

Ahead of a possible trip to the Tattersalls July Sale the Juddmonte-owned Culcor got off the mark at the fifth attempt for Ger Lyons in the seven-furlong maiden.

With three top-four finishes from his first four starts, the Invincible Spirit colt lined up with a leading claim which was reflected in a starting price of 5/6. Colin Keane made the running on the three-year-old who was firmly in charge over the last furlong and a half once he took the measure of the newcomer, Fiddlers Green, who had chased him throughout. Culcor finished with three and a quarter lengths to spare.

“He did there what he’s been showing at home and we’ll talk to the Juddmonte team about where he goes next as he does have an entry in the July Sale,” reported the trainer’s brother Shane.

AFTER combining for a Group 2 success in France the previous afternoon Joseph O’Brien and Dylan Browne McMonagle struck with the 2/7 favourite World Famous in the colts and geldings’ maiden over an extended nine furlongs.

For much of the last half mile it looked as though Rick Dalton had slipped the field and he held a commanding advantage turning for home. World Famous steadily closed him down though to get on top inside the distance and reach the line three-parts of a length ahead of the promising newcomer Nemean, with the brave Rick Dalton a further neck back in third. The winner was building on a second to Vellner at the Curragh just over two weeks previously.

“Dylan said he never travelled like he did at the Curragh and he thought he was in trouble at the bottom of the hill. A bit better ground would help him,” reflected the trainer’s representative Brendan Powell.

The day concluded with a 50/1 winner as Heather Bear, trained by Andy Slattery and ridden by his son Andy, took the three-year-old 47-65 rated handicap over an extended nine furlongs.

The Dr Ronan Tynan-owned daughter of Kodi Bear, who was making her handicap debut, got into contention with over a furlong to run and finished off well to defeat Theonewedreamof by a length and a half.