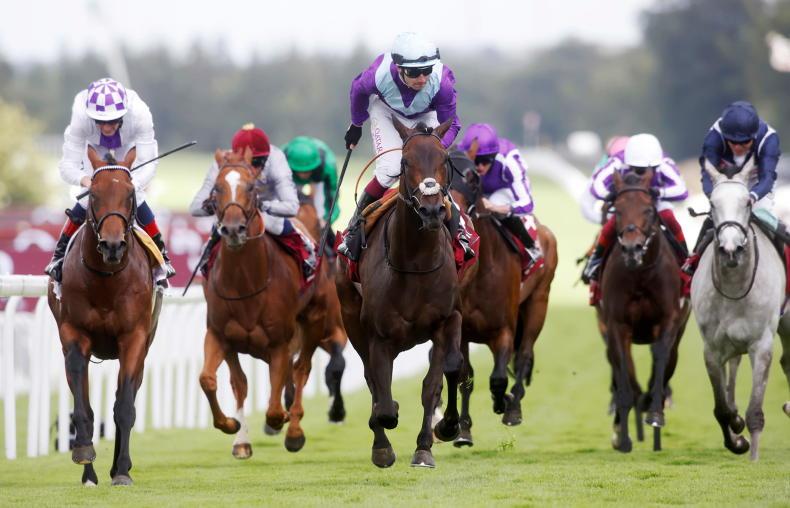 Alcohol Free beat the colts to provide owner Jeff Smith with a famous victory in the Qatar Sussex Stakes at Goodwood.

Successful in the Coronation Stakes at Royal Ascot in June, the Andrew Balding-trained filly attempted to make all in the Falmouth at Newmarket last time out but had to give best close home to Snow Lantern, who took her on again.

Champion jockey Oisin Murphy was determined to delay his challenge on this occasion and made sure he played his hand late.

After a slow early pace Century Dream injected some speed into it a long way from home and caught a few rivals on the back foot.

Kevin Manning set off in pursuit on the favourite Poetic Flare and on entering the final furlong hit the front – but Jim Bolger’s 2000 Guineas and St James’s Palace Stakes hero was soon to face a bigger challenge, as Alcohol Free (7/2) quickened impressively and went on to win by a length and three-quarters.

Snow Lantern, who could have run in the Nassau Stakes over 10 furlongs later in the week, made up plenty of late ground to claim third, the same distance away.

Smith last won the race in 1984 with Chief Singer, while he has also tasted Goodwood glory with the likes of Lochsong and Persian Punch.

Winning owner Jeff Smith has enjoyed much success at the Qatar Goodwood Festival over the decades, most memorably with Chief Singer, who landed this race in 1984, Lochsong and Persian Punch.

Smith said: “I won my first Sussex Stakes 37 years ago – I had jet black hair and no worries in the world! I thought it was very easy and that I would come back and do it again.

“This filly is something else. The way she has won is simply incredible, I am thrilled to pieces. What a wonderful job Andrew and the whole team have done.

“It wasn’t so much the opposition; I was more concerned that we did not have a repeat of the Falmouth where she got left in the lead having broken too well. She needs to get cover and something to aim at.

“Then she got bumped around and pushed back, but then the way she picked up showed what she really is. She is a champion – there is no question in my mind."

Top of the tree

"But this filly has already won two Group 1 races, so it was lovely to see her cement her place at the top of the tree.

"Oisin was at pains to try and tuck in and get some cover because she's so much better when you are able to do that and she has got something to aim at. Poetic Flare is a very good horse, but she really did it well in the end.

“I am sure there were hard luck stories, but I am sure she was the best horse on the day. It was lovely to see her do that because we have always believed in her. It is no easy task taking on the colts and older horses, and to do it in that style was just fantastic."

Balding continued: “It is a privilege, it really is, watching her at home in the mornings. Cassia, who rides her every day, does a wonderful job as she tends to get a little highly strung. Watching her work is demoralising for the other horses; we have to keep swapping the lead horse because she is just so, so good. You see her afterwards and she is hardly blowing – it is effortless really.

“She has looked very good right from her first bit of work, and we ran her on one bit of work. She had been cantering, we worked her once and thought we’d better run her. She went to Newbury and hosed up. She has been the victim of bad draws whenever she has run, to be honest.

“She probably would have won the Dick Poole, and, with a good draw, I think in the Guineas she would have gone close had she been drawn in the middle or to the far side. Anyway, I will take this over all of those!”

Regarding future targets, Balding added: “It was Jeff Smith's idea in the first place, and I don't think it's a bad idea, to put her in the International at York and we decided to keep her in at yesterday's forfeit stage.

"It might be asking a bit much, going a mile and a quarter, but she's a filly that has won three Group 1 races, so we have very little to lose.

"If it doesn't work, we'll regroup and go back to the mile race on Champions Day."

Murphy said: “I can't thank everyone at Park House enough. Alcohol Free really can be a handful in the mornings. Cassia has to deal with her every day and deserves a medal because she can be really tough work.

“Anyone who follows me on Instagram will see that, when I go to tack her up, she looks like she is going to bite or kick me. Then when you get near her, she is quite the opposite. She is a special character.

“Alcohol Free is so, so talented and what a thrill I got from that. I've won this race before on Lightning Spear and last year it all went wrong on Kameko. Day to day, you have to just keep kicking.

“Alcohol Free thrives on racing, and she felt super on Saturday; we only went four furlongs, but I was full of confidence to be honest, particularly when the rain came.

“I knew James Doyle would go forward on Century Dream but on his own terms and in his own rhythm. I knew Tilsit under Kieran Shoemark and Alcohol Free would fight for the same position. Unfortunately, she is 440kgs and Tilsit is probably 500kgs plus. I was never going to win that battle and was happy to come back and trust that Kieran would move at the right time and that I would be able to get out and slip into the race. The race really ran from when we turned into the straight and then it was a grind to the line.

“Jeff Smith has been an incredible supporter of horse racing for a long time. I don't know how many employees there are at Park House Stables, but they all play their part and this will mean the world to them.”

Una Manning, daughter of Jim Bolger, said of the runner-up: “Kevin [Manning] said for Poetic Flare that it was the same as France again. The ground just blunted his speed, and I would say the wind drying it out has just made the ground tacky.

“That was all that Kevin said - the ground. We were always going to turn up here, it was just unfortunate that the rain came. We were game to go and had to give it our best go.

“Poetic Flare has lost nothing in defeat. He loves his racing, loves his work. He's an easy horse to deal with and to travel. Bringing him over here wasn't going to be any sort of disadvantage to him even if the ground didn't turn out like he wanted.”

Kevin Manning said: “It was the same as in Paris. I was riding Poetic Flare a little bit behind the bridle from a long way down, whereas on good ground he is travelling into his races. I think the ground has just blunted him for speed. It is tacky, holding ground and there is no bounce in it.

“Poetic Flare has dug very deep and I thought for a few strides when Alcohol Free came by that he would shunt her back.

“He's won a 2,000 Guineas and St James's Palace on good to quick ground. The runs that he hasn't lived up to have both come on soft ground.”

Snow Lantern’s rider Jamie Spencer said: "The pace was only just OK. When they quickened at the three, I was caught a little flat-footed, but I hit the line very strong. Further won’t be a problem."