Just one final step...
You must confirm your email address by clicking on the link we’ve sent to your email address.
You are only one short step away from reading 5 free Field+ articles.
FRANCE: Space Blues jets in for Group 1 success

FRANCE: Space Blues jets in for Group 1 success
By Irish Field Contributor on 09 August 2020
The Charlie Appleby-trained son of Dubawi was stepping up after Listed, Group 3 and Group 2 successes on his last three starts

Space Blues produced a decisive turn of foot in the final furlong to open his Group 1 account in the Prix Maurice de Gheest at Deauville.

A winner at Listed, Group 3 and Group 2 level on his last three starts, the Godolphin-owned colt finally got his triumph at the top level in impressive fashion.

Trained by Charlie Appleby, the son of Dubawi had finished a close third to Advertise in this race 12 months ago, but has improved and now looks the finished article.

Although quickly out of the stalls from his rail draw, William Buick allowed others to set the pace as he gave his mount plenty of cover towards the rear.

Kevin Ryan’s Hello Youmzain soon grabbed the lead on the stands side, while the Clive Cox-trained Golden Horde was to the fore in the centre of the course. The latter was tracked by Godolphin’s other runner, Earthlight, from Andre Fabre’s stable.

There was a wide-open look to the race inside the final quarter-mile, as Hello Youmzain and Golden Horse tried to kick clear while Earthlight, the 10-11 favourite, ultimately flattered to deceive.

The gaps appeared for Space Blues (4/1), who burst through and stormed past his rivals in the final half-furlong to win by three-quarters of a length.

Hello Youmzain held on for second place, with Aidan O’Brien’s Lope Y Fernandez a head away in third. 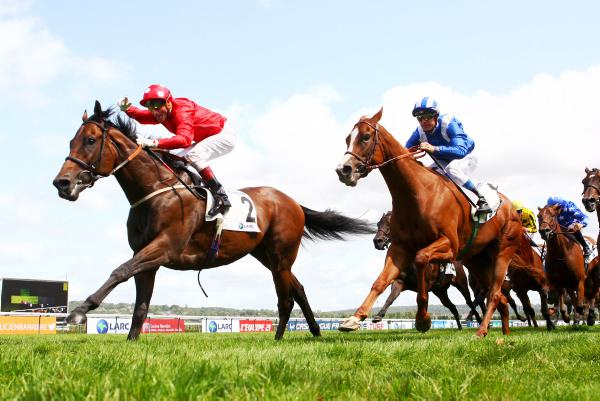