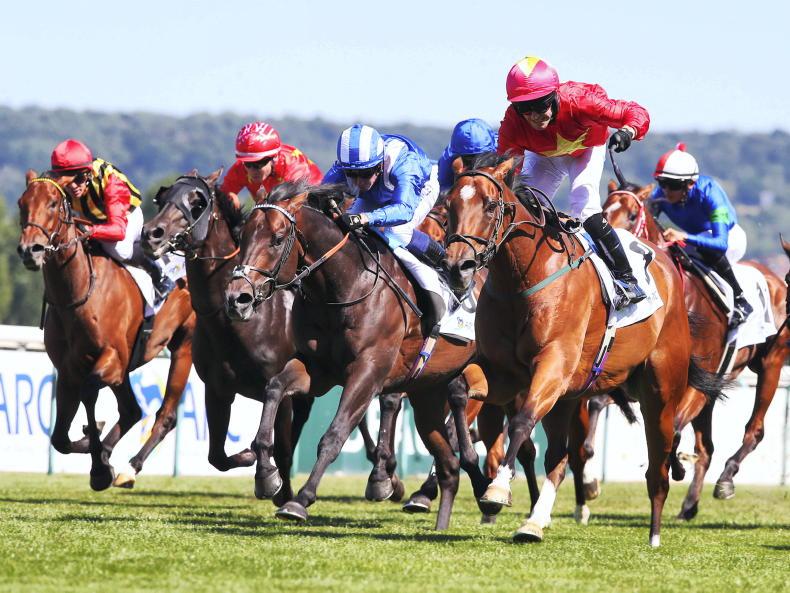 Highfield Princess and Jason Hart (red and yellow) hold off all challengers to win the Group 1 Prix Maurice De Gheest at Deauville \ Dyga/focusonracing.com

IT’S pretty unusual for sprint race to suffer from a lack of pace. However last Sunday’s ARC Prix Maurice de Gheest at Deauville wasn’t really a sprint race, given that it is run at the quirky distance of six and a half furlongs. That said, this Group 1 event, run on very quick ground on a flat track, is less of a stamina test than six-furlong events at the likes of Ascot or Newmarket.

As it played out, the meek early tempo undoubtedly played into the hands of the ready winner, Highfield Princess. With a stronger early gallop perhaps the patiently ridden runner-up, Minzaal, or Rohaan and Artorius, who shared last place with less than a quarter of a mile to run before rocketing home into fourth and sixth respectively, would have prevailed.

However, it would be churlish in the extreme to pour cold water on the wonderful underdog tale that surrounds Highfield Princess. She was bred only a few kilometres from Deauville at Haras du Camp Benard yet is really a North Yorkshire success story, named by her owner/breeder, John Fairley, after the racing yard near Malton which he owns and rents out to her trainer, the Co Tipperary-born former jump jockey John Quinn.

A third Group 1 scorer for her Kildangan Stud-based sire, Night Of Thunder, Highfield Princess has come a hell of a long way since she was beaten off a selling plater’s mark of 57 when still a maiden in a handicap at Doncaster less than two years ago.

Ten months later and a Royal Ascot triumph took her number of handicap triumphs to six, and her progress didn’t finish there, as her next three victories came in a listed race, a big money contest on All-Weather Championships Day and in a Group 2.

“She lives just yards from my front door, I go and pat her all the time, and the whole day has been totally special,” he said. “I’ve been coming to Deauville since I was a teenager and I love it here, so to win a Group 1 at this course in front of a big crowd, it’s magnificent.”

Winning jockey Jason Hart had troubles both in early stages, when his mount pulled hard as she pressed the Japanese-trained leader, King Hermes, and in the closing stages, when she hung away from his whip, costing him a two-day riding ban.

Yet she won with a little more up her sleeve than the three-quarter-length margin suggested, with Minzaal getting the better of a three-way photo for second in front of Garrus, who was the chief sufferer from the winner’s waywardness.

Hart was breaking his Group 1 duck, while Deauville has often been kind to Quinn – his only previous top-level score was with The Wow Signal in the Prix Morny here in 2014.

The prohibitive expense of flying to France meant that a long return road trip was necessary, which effectively rules the winner out of a potential quick turnaround to contest the Nunthorpe Stakes on home turf at York.

But this eight-time seven furlong winner is clearly getting faster with age and, now that she has proved herself on quick ground, it may be that the Breeders’ Cup Turf Sprint, over five and a half furlongs at Keeneland in November, becomes her end-of-season target.

Sean Quinn, representing his father, said: “I think that she can win at both five and six furlongs which means that the Haydock Sprint Cup and the Flying Five at the Curragh are both possible options.”