Francis Graffard’s Malavath, yet another fine advertisement for Tally-Ho Stud’s young stallion, Mehmas, coming home a length and a half to the good at Deauville 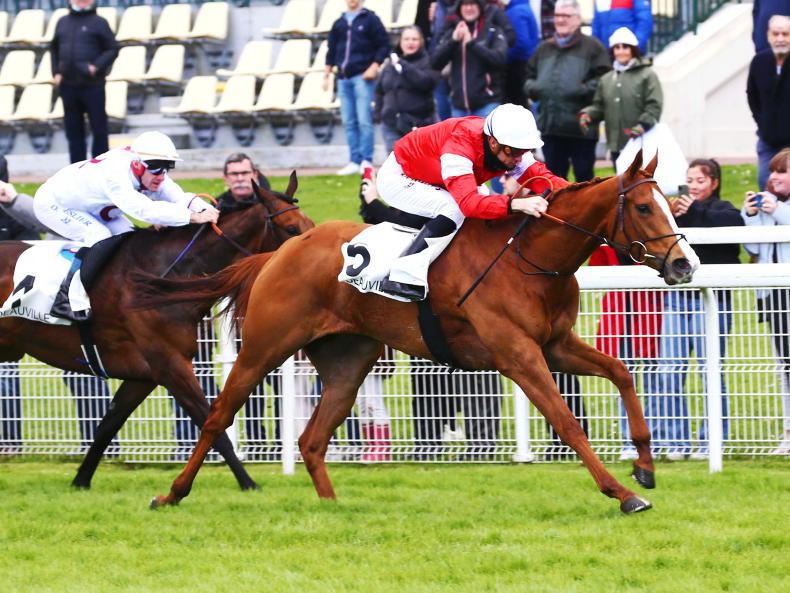 THE classic trial season stepped up a gear on Thursday with the staging of the traditional ‘straight course’ Guineas preps at Deauville. The form needs careful analysis given that these two seven-furlong Group 3 events were staged on holding ground and, owing to a pedestrian pace, the fillies’ version, the Prix Imprudence, was run in a time three seconds slower than the colts had managed in the Prix Djebel.

The Imprudence definitely looked the stronger of the pair beforehand and the cream came to the surface with Francis Graffard’s Malavath, yet another fine advertisement for Tally-Ho Stud’s young stallion, Mehmas, coming home a length and a half to the good.

A Group 2 winner last term as well as runner-up in the Breeders’ Cup Juvenile Turf, she clearly goes on any ground.

But don’t give up on the runner-up, the Prix Marcel Boussac champion, Zellie, as she was given a typically tender comeback ride by Olivier Peslier and stayed on best of all at the finish.

The first two hold entries in both classics, the Poule d’Essai des Pouliches and the 1000 Guineas.

The Djebel provided a first flat pattern victory for Marseille trainer Richard Chotard, who has had a licence for over 25 years but is better known in jumping circles, thanks to the Rock Of Gibraltar colt Rock Boy.

Now unbeaten in three starts, he cost just €16,000 as a yearling and is likely to head for the Poule d’Essai des Poulains, though Chotard condeded that he may be something of a soft ground specialist.