Title: FAIRYHOUSE SATURDAY: Back Buddy to make you a little richer in Grade B feature 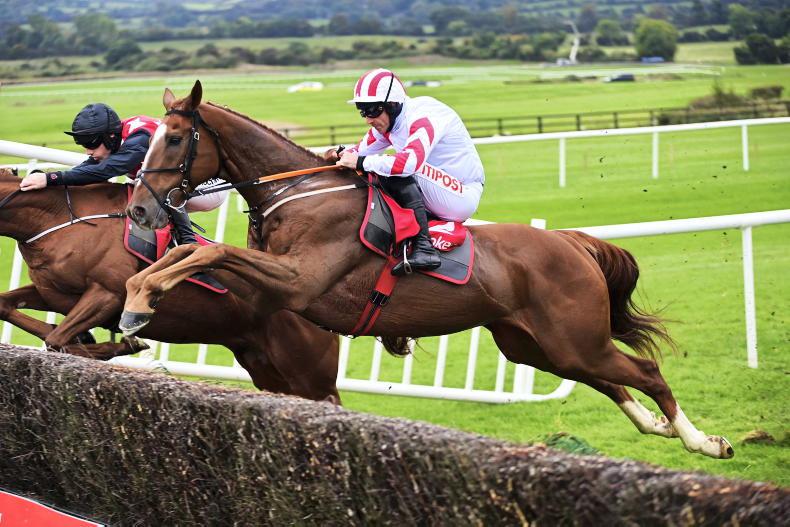 Torygraph can get off the mark on his second try over fences. A 136-rated hurdler, he began his chasing career with a pleasing effort when third to French Dynamite at Punchestown. He has to reverse form with the second placed horse there, Dewcup, but he can do that returning to the scene of his comfortable maiden hurdle win last season, with this extra furlong and a half also a help.

Max Flamingo should go well after an excellent run to be third to Drinmore hope Gabynako on the inner course here earlier in the month. He is another with good form having won a handicap hurdle at the course last season.

Nobody Home has a good record at Fairyhouse and ran well here on his penultimate start when fourth to Arrycan. He improved to fill the same position again in a better heat at Punchestown, behind Fully Charged, for his latest start. He has reached the frame on five of his 10 starts at Fairyhouse and he remains competitively handicapped off a mark 2lbs lower than his previous win over fences.

Last year’s winner and fourth, Kavanagh’s Corner and Halsafari, are back for more, and the latter may reverse the form. Liam Cusack’s gelding has ran nicely on his only two starts this season, finishing in behind two horses who take on the Grade B handicap chase on this card.

This looks a trappy renewal, with plenty having questions to answer, particularly on this good ground. That doesn’t apply to Buddy Rich however and he gets a tentative vote to make it three wins in four years for Gordon Elliott. Second on all four of his starts over fences, to some very talented horses as well, he got off the mark last time out when too good for the smart Ballyadam at Navan. He’s race-fit and proven on quick ground, and could well improve further on his handicap chase debut, so looks the most solid option.

Poseidon did well at Cork and looks a real threat while there should be more to come from the likes of Dunvegan and Unexcepted, who’ve both promised plenty. The second vote however goes to another Elliott horse in Vado Forte. He looked really smart on his first start for the yard when much too good for January Jets at Limerick. You have to excuse his last run in a Down Royal Grade 2 but that may have been a one-off, and he remains capable of better.

This could go to Gringo D’Aubrelle. Gordon Elliott’s five-year-old was a smooth winner of a bumper at Navan recently but the form of his penultimate run is more significant, when he was beaten just two lengths by subsequent Grade 2 scorer Blazing Khal in a Galway maiden hurdle. That experience should stand him in good stead also given his main rivals are making their hurdles debuts.

Adamantly Chosen is a clear danger. He won the Land Rover Bumper last April, a race that has worked out well with the second, third, fourth and fifth winning on their next starts.

Grangee displayed a smart level of form in bumpers last season and can get off the mark first time up over hurdles in what doesn’t look the strongest heat. Willie Mullins’s mare has Grade 2 and Grade 3 mares’ bumper wins on her CV and she was a very respectable sixth in the Champion Bumper in between. She should handle the decent ground fine.

Newcomer Watch House Cross might give her most to do. He won his point-to-point in good style for Sean Doyle and has his first start for Henry de Bromhead now.

He may not be 100% fit but Enjoy D’Allen could still be good enough to win off a mark of 115, which is 30lbs lower than his chase rating. Ciaron Murphy’s gelding had an excellent time of it last season, winning twice, finishing second five times and finishing third in the Irish Grand National. He also won his novice chase here and though today’s ground could be quicker than ideal, he is significantly down in class.

Mt Leinster Gold gets the second vote. She won her maiden hurdle here also last season and went on to finish sixth to Guiri in a competitive handicap hurdle at the Punchestown Festival. That was only her third track start and she may well have more to give.

Stumptown looks very promising after his Limerick maiden hurdle win and he’s taken to make it two out of two. At Limerick he was off the bridle and had ground to make up heading into the straight but responded very well to pressure and in the end won going away, under just hands and heels from rider Conor McNamara. That contest has worked out well, particularly through the third horse Top Bandit, whose won twice since.

Gordon Elliott’s Chemical Energy ran second to My Mate Mozzie in the Grade 3 For Auction Novice Hurdle at Navan and this could be a little easier for him now.

Gordon Elliott is operating at a 32% strike rate in bumpers this season and with that in mind, it seems fair to presume that he might have kept a few nice horses for this race, named after his uncle. Santonito will be ridden by Jamie Codd, suggesting he’s the number one hope.

Willie Mullins also has a potentially interesting newcomer in The Nice Guy, owned by Malcolm Denmark.

Next best: The Nice Guy