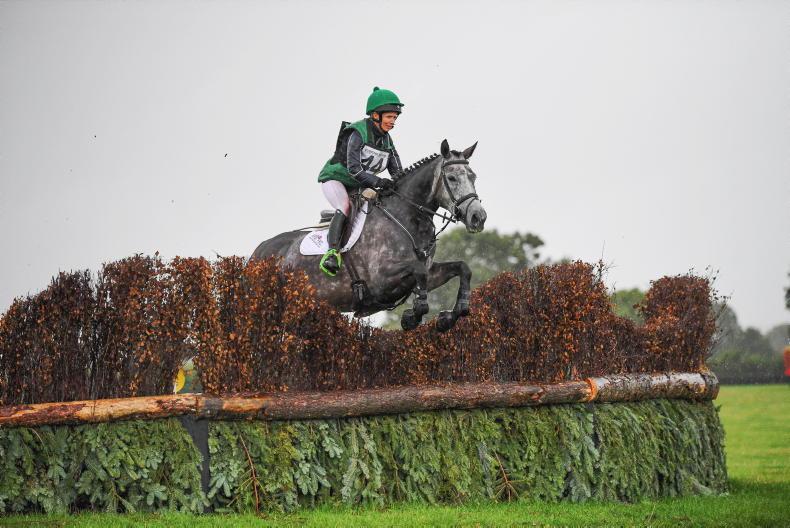 Sarah Ennis and OnceUponATime, winners of the EI110 at the HSI Eventing Ireland National Championships in Lisgarvan \ Louise O'Brien Photography

Ennis, who is competing Lady Action M in the CCI4*-S for eight- and nine-year-olds at Blenheim this weekend, led this 19-runner championship after the Joan Ahern and Derval Diamond-judged dressage phase on Diamond Fusion (21.9 penalties), followed by Nicky Roncoroni on Henry Higgins (26.2) and Maria Byrne riding BGS Tea Or Coffee (26.9).

Ennis was also lying a close fourth at this stage on OnceUponATime (27) but found herself in front with the six-year-old Barely A Moment mare as the grey show-jumped clear, unlike Diamond Fusion, who had three down, Henry Higgins, who lowered one pole, and BGS Tea Or Coffee who was another to pick up penalties over the Michael Doyle-built track.

There were just four show jumping clears but, on Sunday, only three combinations had problems across the country. One combination who left all the poles intact and completed a double clear on day two to finish second was Joseph Murphy and the very consistent My Foxhall Kit. That six-year-old Orestus mare may have failed to win this season but has only once finished outside the first six in 10 completed starts.

“This mare was previously ridden by Alice Copithorne who partnered her to win the Dublin young event horse five-year-old final held at Lambertstown last August,” said Ennis. “I took over the ride this season and she has been placed nearly every time she has been out including sixth in the CCI2*-S at Kilguilkey and fourth in the CCI2*-S for six-year-olds at Millstreet.

“The plan since the start of the year was to qualify for, and hopefully get to, Le Lion, but we are all in the dark at this stage as no one knows who is going. It’s a real quandary as I have the mare entered in the two-star-long at Ballindenisk but I wouldn’t do that if I thought she was going to Le Lion and all these entries cost money.

“I hadn’t ridden at the nationals for a few years as the two-day format is very time-consuming but, I have to say it was a great weekend. Clive (Corrigan) had done a wonderful job with the three tracks I rode over (she was second and third in the EI120 on Woodcourt Garrison and Grantstown Jackson, also fourth in the EI115 on Dourough Ferro Class Act) with some new questions on great going. I must say too, I enjoyed taking the EI90 course-walk and was very pleasantly surprised by the number of competitors who turned up.”

Barnaboy Stud sponsored a prize for the highest-placed young rider in this class and this was awarded to Emma Egan who finished eighth on her mother Sara’s 16-year-old coloured mare Ballytoher Sabrina.