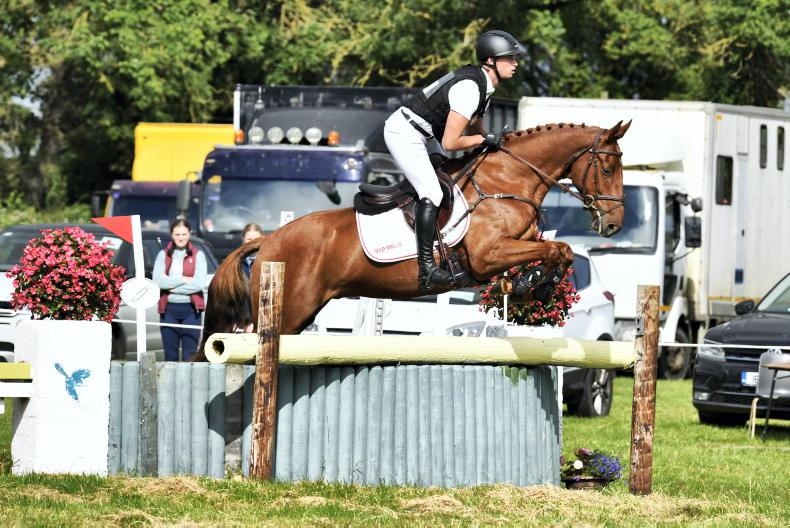 Ian Cassells and Loughtown Henry, the four-year-old winner of Section A of the Young Eventhorse Series final leg at Rincoola \ Tadhg Ryan Bit-media.com

THE fourth and final leg of this year’s Young Eventhorse Series took place on Wednesday at Rincoola where there was a good-sized entry as owners and riders sought a share in the Horse Sport Ireland-sponsored league prize-fund and Dublin qualification.

A four-year-old who did both for his connections was the Section A winner, Loughtown Henry, an Irish Sport Horse gelding who amassed 283.8 points under his Newcastle, Co Dublin owner/breeder, Ian Cassells. Also qualifying in second and third were the Quidam Junior gelding MBF Corbeagh (281.6), who is ridden and produced by Nicola Ennis for American owner Carrie Meehan, and Richard Ames’s Jackaroo gelding JFH Golden Spear (280.3) who was ridden by Elle Tonner.

By the American thoroughbred Pointilliste, who is sire also of Cassells’s CCI3*-L winner Master Point, the chesnut Loughtown Henry is out of the Carrick Diamond Lad mare Carrick Jewel who was first produced for her breeder, Tom Jones, by Katie O’Sullivan. Under Cassells, and on her dressage score, the mare placed fourth of 100 in the CCI1* at Tattersalls in 2014.

In the four-year-old league, Loughtown Henry finished third on 14 points behind the Rhiannon Burton-owned and ridden Kilmanahan Ulysses (20) and Ramiros Flight (19) who is campaigned by Luca Bortolamei for Carol Gee. Both of these horses contested Section B on Wednesday, placing fourth and ninth respectively behind TMS Freedom (282.1) whose only other start in the series had been closer to home in Tullylish.

Ridden by Gwen Scott for Portaferry’s Wallis Birch and bred in Co Antrim by Tanya Smith, this ISH mare is by the Belgian Warmblood sire Je T’Aime Flamenco out of Kilmastulla Harlys Diamond. That 2008 Harlequin du Carel mare amassed 143 Show Jumping Ireland points (mainly under Smith) before retiring to stud.

Although the Paul Donovan-owned Sportsfield Johnny Logan finished second on Wednesday on 279.1 points, he failed to qualify for Dublin as, on each of his appearances in the league, the Lagans OBOS Quality gelding had been partnered by a different rider, in this instance Sara Lundkvist. Thus the ticket passed on to the Imperial Hights gelding Imperial Wonder (278.8) who was ridden by Lucy McIlroy for her mother Angela.

This Newy combination is among the entries for today’s Burghley Young Event Horse qualifier at Tattersalls July Show as are Bortolamei and Ramiros Flight.