“This is a real easy-going, calm horse who is very good across the country,” said Victoria Brown of Dunrath Teddy 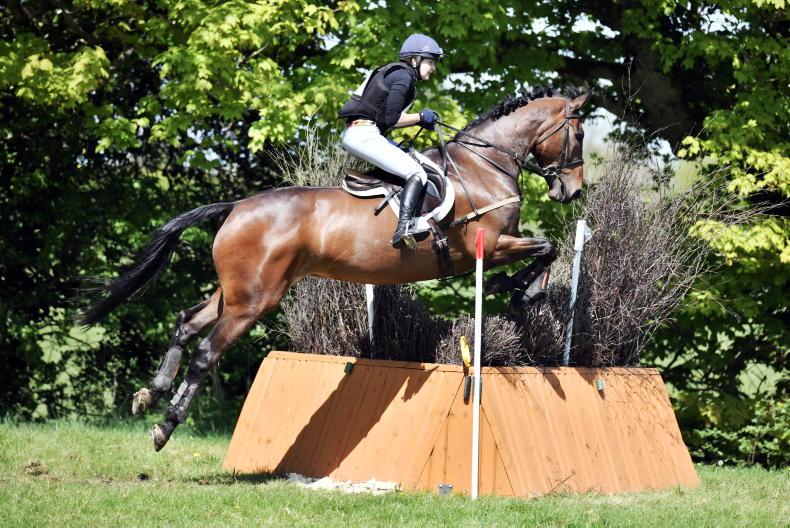 PEERLESS Punchestown was looking its best on Sunday for the first of this year’s Eventing Ireland one-day events and, hopefully, when watching the video at home in Venice, Holly Snapp, who is a big fan of the EI110 winner, Dunrath Teddy, will be tempted to fly over to see the Irish Sport Horse gelding in the flesh.

Paula Geiger judged this 30-runner class and, with her scores ranging from 27.3 to 40.5 penalties, the Victoria Brown-ridden Dunrath Teddy was lying roughly in the middle following the first phase.

His position improved greatly after show jumping, as he left all the poles intact unlike the majority of his rivals who had at least one fence down, while he shot to the top of the leaderboard when one of only five to go clear within the time over the fixed fences.

“This is a real easy-going, calm horse who is very good across the country,” said Brown who was delighted to have posted the only double clear inside the time.

“He injured himself as a five-year-old and missed a lot of time so, even though he’s 11, he hasn’t done all that much. I’ll do another Novice with him and move him up to Intermediate with the three-star-long at the second Millstreet being his target.”

Having followed up his EI105 win at Hillcrest with a disappointing show jumping round in the CCI1*-Into at Ballindenisk, Kilroe Frolic was dropped back to EI100 level here by Sian Coleman and the six-year-old Cavalier Land gelding duly recorded his second career success, on just his fourth real start, on his John Lyttle-awarded winning score (27.8).

Two of his 17 rivals also completed on their sub-30 dressage scores, the Kate Solon-owned and ridden Oakport Ringo Star (28.5) and the Gillian Beale King-partnered KIEF Amazing Marco (29.3) to place second and third.

Four riders posted sub 30-penalty dressage scores in the 16-strong EI90 but only two of these remained on their Clare Fitzsimons-awarded marks and both of these were on 28.3 apiece.

When the scorers looked into their times, Clodagh McGauran got the nod with Yvonne Farrell’s 12-year-old Caricello gelding Cruising Caricello, while Louise Bloomer had to settle for second with her own and Jinnie Webb’s five-year-old Shannondale Sarco St Ghyvan gelding Shannondale Levi who was making his EI debut.

McGauran, a member of the Meath Branch of the Irish Pony Club, was having only her second outing in Eventing Ireland company.