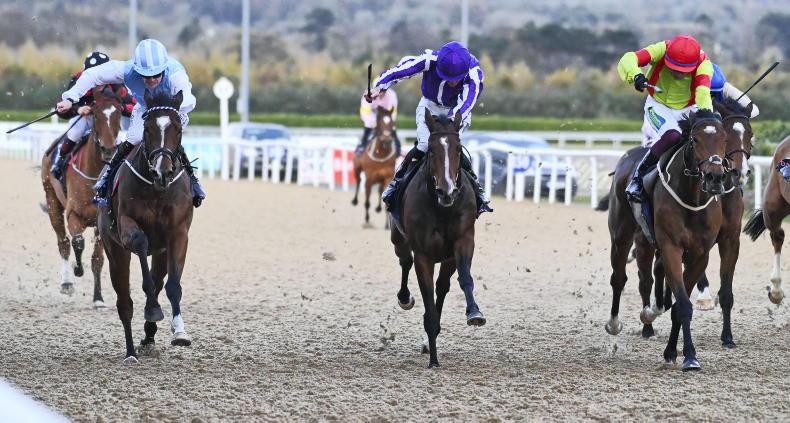 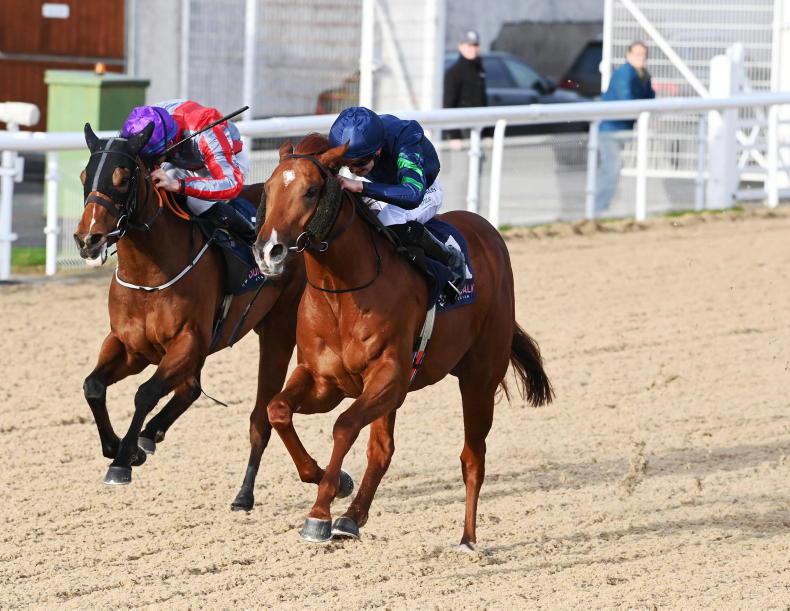 EDDIE Lynam made a whirlwind start to the winter season at Dundalk with a treble and he could have something to look forward to in Navarra Pace (13/2) who got off the mark at the second attempt in the seven-furlong, three-year-old maiden.

The John Keaney-owned gelding finished towards the rear in a sprint maiden at the Curragh in September but turned in a vastly better effort under Joey Sheridan while giving the impression that there was still more to come from him.

The Footstepsinthesand gelding was forced to endure a wide trip for most of the race and then looked quite green in the straight, notably when running into the back of Cyclamen at a vital stage.

To his credit though, Navarra Pace finished well after righting himself and came home strongly under the stand’s side rail to edge out the front-running favourite Oh Cleo by a neck.

“I’m delighted to win for John and Mary (Keaney). I went to school with John so I know him for 50 years. We grew up on the same road,” commented Lynam. “The horse did it well. He’s a homebred and it’s a good old family. We’ll probably find a handicap and step him up to a mile.”

The treble was brought up by Linus Larrabee (9/2) in the first divide of the 47-65 rated seven-furlong handicap.

Sorcha Woods was on board the strong travelling Lynam-owned five-year-old who edged out the favourite Circles after the pair went toe to toe over the course of the last furlong. This was Linus Larrabee’s third career win, all of which have come on the Polytrack.

“He’s a bit of a character but Sorcha gave him a good, confident ride. She comes in three mornings a week to ride out and I’m delighted for her,” stated the trainer.

“He’s a horse you have to kid a little bit but he’s not devoid of ability.”

Lynam earlier sent out Gobi Star (5/1) to land the six-furlong claimer which gave the trainer’s stalwart patron Trevor Dalzell his ninth winner of the year.

A winner of a Down Royal maiden in September, Gobi Star came with a strong charge for Chris Hayes to get on top inside the final furlong and accounted for the front-running Pulse Of Shanghai by half a length.

Pat Martin claimed the winner for €13,000, James McAuley secured the runner-up for €12,000 and John McConnell claimed the unplaced Inflection Point for €12,000.

Tenacious Tesoro toughs it out

DONNACHA O’Brien’s El Tesoro, whose career began with a fourth in a Naas maiden won by Little Big Bear in May, made his first foray into handicap company a successful one in the six-furlong nursery.

The Atlantic Thoroughbreds-owned son of Mehmas, who was wearing first-time cheekpieces, produced a likeable effort under Paddy Hartnett and could be the type to progress further in the coming weeks.

The 100/30 chance led over a furlong from home and battled on tenaciously to see off Not Too Real Bad by a short-head.

“They went fairly quick out in front and I got a nice tow into the race and I was comfortable the whole way. He quickened up well and hit the line well. The second horse was coming to me, but I thought there was a bit more left in him,” remarked the winning rider.

After hitting the crossbar at various points through the afternoon James McAuley and Colin Keane struck with Instrumental in the 47-75 rated three-year-old handicap over a mile.

Now a dual winner and placed three times in six starts for his owner-trainer, the 2/1 favourite overhauled Redstone Well in the closing stages to carry the day by a neck.

McConnell on the double

JOHN McConnell looks sure to have an industrious winter and he signalled his intent for the coming months by notching up a double which began when the Damien Lavelle-owned Cousin Shay (12/1) bagged the second division of the 47-65 rated seven-furlong handicap.

The Conor Hoban-ridden three-year-old finished second in a handicap here in January and bounced back from an unplaced comeback here almost two months ago to register a last-gasp triumph over Lion Ring.

“He has ability but he’s very immature. It was good to get his win and I’m delighted to get one for Damian (Lavelle, owner).

“Hopefully this horse can kick on and go on during the winter.

“He had a good run here in January and then had a little mishap. He came on for the run the last day,” reflected the trainer.

Conor Hoban was also on board McConnell’s other winner which came courtesy of St Cianans Fire (3/1) in the first division of the 47-65 rated handicap over an extended 10 furlongs.

The Simon Condron-owned four-year-old was just 4lb higher than when scoring at Punchestown a couple of months ago and he won nicely.

He was travelling best of all from early in the straight and he responded well to pressure when required to defeat Morning Dew by half a length.

“He travels well and he doesn’t kill himself when he hits the front, so hopefully there might be another day in him.

“His owner Simon has been very patient with him and it’s paying off now,” reflected the trainer.

The card concluded with a winner for Natalia Lupini who enjoyed such a memorable season on the turf headed by the four-time handicap scorer Dunum.

On this occasion the trainer struck with the first reserve Lily Of The Glen who was ridden by Killian Leonard as she opened her account after 20 previous attempts.

The Leslie Laverty-owned 9/1 chance was always close to the pace and kept on well from over a furlong out to reach the line half a length ahead of Stardayz.