Title: DOWN ROYAL FRIDAY: Sheehy secures honours with a brace 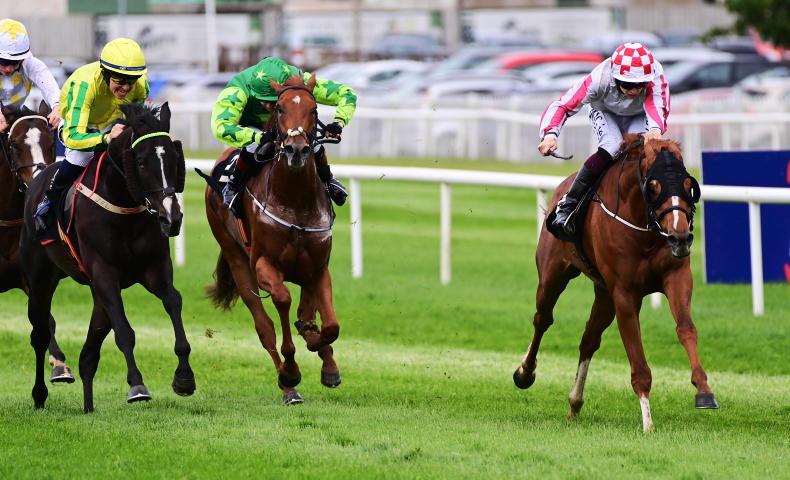 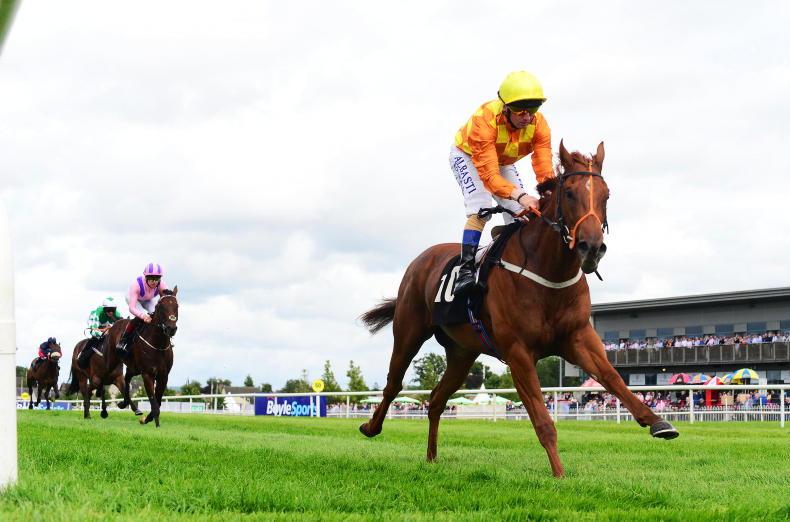 MIKEY Sheehy took the riding honours on the first day of Down Royal’s Summer Festival after he secured a brace of winners.

First up was Collective Power in the McMahon McKay Apprentice Handicap over five furlongs.

The four-year-old gelding added a turf success to his pair of Polytrack victories at Dundalk when ridden to get on terms inside the final furlong of this sprint. He went on in the final 100 yards to win by three-quarters of a length to justify 3/1 favouritism for owner Sabena Power.

Eddie Lynam said: “He did (ride him with confidence), he’s a good rider. I told him he travels well, sit with him as long as you can and come with one run. His mum (Gathering Power) was good to me, she was a good mare and his father (Slade Power) was great! He’s the first foal out of that family.

“We’ve had a lot of seconds and thirds and we haven’t had a winner for about six weeks. We would like to try him at six (furlongs again), his father and mother both liked six.”

Sheehy’s double came up on Joseph O’Brien’s Goa Gajah (85/40f) in the Weatherbys Median Auction Maiden. This colt was first reserve and took full advantage of getting a run as he made all and raced wide to prevail by two and a half lengths for the Magnolia Racing Syndicate.

Sheehy said: “There was no pace on early so I had to make my own race. I was adamant to get him out middle to stands’ side and he did it the hard way.

“He was green and raw but there was nothing around me to take me anywhere. He quickened up nicely. He has taken a massive step forward from his first run.”

TRAINER James McAuley enjoyed a 311/1 double which was initiated by Sister Rosetta (25/1) in the Irish Stallion Farms EBF Fillies Handicap. She dominated off the front in this sprint and kept up the gallop to come home by a length and a half in the trainer’s colours.

Jockey Gary Carroll said: “I rode her when she was rated 94 and she was off 66 there. He (McAuley) said she got a bit of a wind job and was treated for ulcers after her last run. She skated along and went right to the line.”

Alice Milligan (11/1) made the breakthrough at the 32nd time of asking in the seven-furlong Proparamedics Handicap. The Dylan Thomas mare was making her sixth start for owner/trainer McAuley and stuck to her task gamely to win a bunch finish by a short head.

She raced towards the rear before delivering her challenge in the final quarter of a mile.

Jockey Luke McAteer said: “My instructions were actually to make the running, I think that’s normally her only way of running. When you are riding for the boys, they are fit, happy and healthy so no matter where you land you have a chance.

“I just kept teasing her really down the hill and, in fairness, she stuck her neck out.

“She was probably looking for the line but today was the day, thank God.”

PADDY Twomey’s Treasure Trove ran away with the G. Dunlop Electrical Maiden by four and a half lengths. The 8/11 favourite hit the front over a furlong out and soon stormed clear for the owner, Merry Fox Stud Limited.

Chris Hayes came in for the winning ride and said: “A very nice filly. The ground is riding a bit on the slow side and I’d say she probably would have been more impressive if it was a sounder surface.

“Good to get a winner for Paddy, he’s a stable in form and any day he asks you to ride one is a good day. I’d say she probably is a stakes filly, to what level I don’t know, but it will be on a very fast surface.”

Tiny Bit came from last to first to land the Future Ticketing Grow Your Ticket Handicap. Declan McDonogh’s mount was tardy from the gates but ran on strongly to lead in the closing stages. She won going away by two and a half lengths at 16/1.

Trainer Kieran Cotter said: “There was a good ease in the ground at Tipperary as well and she was ridden similarly from off the pace. She found plenty late on that day (when second).

“I’m delighted for Bernie (Callanan, owner) a good supporter of the yard, they are owner-breeders and they were trying hard to get a win for the mare (Nanabad).”

Gerard O’Leary’s Chesterton (9/2) fended off odds-on-favourite Are We Dreaming to win the Tote Supporting Racing With Pride Maiden by two lengths for Sue Lenehan.

Assistant trainer Adrian Joyce said: “We didn’t actually have the plan to make the running but he (Jake Coen) used his own head and went on, and he battled away well. Jake is very, very good and is a talented guy. He is going to be one of the stars of the future.

“I think the cheekpieces kept him honest there when he was on his own in front. He made his mind up and focused a bit better in front.”